RC Truck Review: Traxxas Slash with On Board Audio 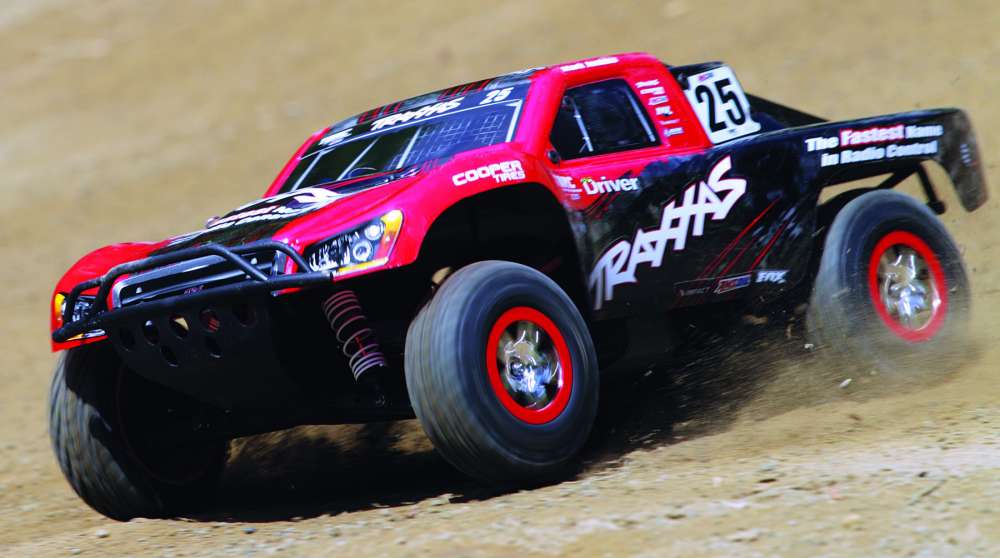 The Slash has seen quite a few years of service, with Traxxas introducing something new with each release. It’s progressed from a pretty basic 2WD Short Course truck to something with 4WD, a Low-CG chassis, waterproof electronics, stickier tires and even a rockin’ sound system. Traxxas fitted this latest release (both 2WD and 4WD versions) with something completely new; a stability management system. The TSM, or Traxxas Stability Management, is a form of traction control that allows you to basically pin the throttle on any surface and the truck will track completely straight. Thankfully one of our test areas has a fine, gravel surface that will certainly put the TSM system to the test.

In its simplest form, the Traxxas Slash is a great vehicle. The inclusion of a battery, charger, brushless system and now the OBA and TSM systems has made this truck not only attractive to our current RTR crowd, but also those seeking a direct replica of the full-scale trucks they see on TV (or in real life). On top of that, the price is pretty reasonable for everything that’s included in the box

• #2869X 7600mAh 7.2v 2S LiPo Battery More power always equals more fun, so swapping out the stock 7-cell for a potent LiPo pack will boost the run time and power output of your Slash.
• #5862 Big Bore Aluminum Shock Set One of the best upgrades for any car is the shocks. Put a set of these Big Bores on your Slash and you’ll deﬁnitely feel the performance.
• #5873R Pre-Mounted Ultra-Soft S1 Compound Front/Rear Tires and Wheels Tires are the biggest performance part you can buy. Pick up a set of these and massively increase performance, with or without the TSM activated

Traxxas has included their next gen, low-CG chassis with this new Slash. This setup is designed to lower the electronics, battery and drivetrain components closer to the ground to improve handling. Up front, the servo sits as low as possible and sticks through the front of the chassis. A separate plastic skid protects it from any bad landings or larger debris that could hit it. To the left of the driveshaft, you’ll see the battery box with ‘clip-in’ battery strap. This strap alleviates the need for a body clip, making the battery change process a much simpler task. To the right of the driveshaft is the waterproof receiver box, waterproof VXL-3S ESC and Velineon brushless motor. Both the receiver box and ESC are screwed to the chassis; no weak chassis tape used here! Finally, the OBA box is screwed to the chassis just above the steering system.

The suspension on the Slash is pretty much the same as the original, seeing only minor tweaks over the years. Strong, molded plastic is used for all the suspension components for maximum durability. Strong, steel turnbuckles are included and allow adjustment of camber, toe and roll centers. The shocks are oil-filled, have one spring installed per unit and feature plastic bodies with pre-load clips for changing ride height. Simple and effective.

The Slash uses a dual-bellcrank setup for the steering. It sits snugly between the lower skid and upper chassis plate with a top/bottom design capturing the inner link. It features an integrated servo saver that, unfortunately, isn’t adjustable. The Traxxas 2075 steering servo sits in a pocket that sticks through the chassis, about as low in the chassis as possible. It has plenty of power and speed to keep up with any over-excited powerslides you might feel the need to do.

The drivetrain is definitely the Slash’s strongpoint. Sealed gear diffs can be found in both the front and rear gearboxes and can be filled with different fluids for tuning. An aluminum driveshaft runs down the middle of the truck connecting the both ends. Just in front of the rear gearbox is a sealed housing that protects the pinion and spur gear. It also protects the Revo-Spec Torque Control slipper clutch which is fully adjustable front outside the case. Power is transferred to the wheels via heavy duty telescoping driveshafts, and the entire drivetrain roll son precision bearings.

Traxxas has included their powerful Velineon brushless system that is capable of handling a 3S LiPo battery. Harnessing this big power is Traxxas’ new TSM system, a traction control system that electronically senses when the truck is about to spin out and auto-corrects it for you. It is adjustable, allowing you to turn it down if you prefer only minor auto-corrections or all the way up if you just want to mash and dash. Traxxas has also installed their OBA system, giving the truck a rambunctious attitude the moment you turn it on. Topping it off is the standard Slash body which I was kind of disappointed with. This is the latest and undoubtedly greatest version of the Slash, how come it’s the same old body? 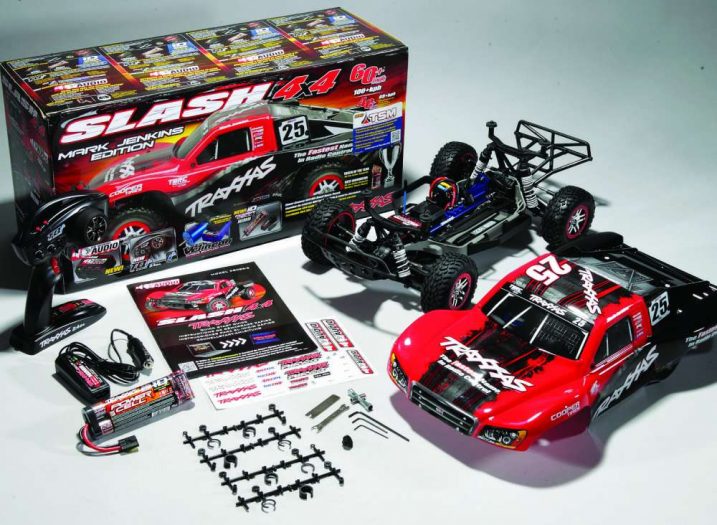 ON THE TRACK
I’ve driven enough Slash’s to know what to expect in the handling department, but what I wasn’t ready for was how much the TSM might affect the handling. We took the Slash to our local BMX track where we could give it a full workout with a bunch of different conditions; various jumps both big and small, some banked turns and a few rhythm sections … all covered in a loose gravel top.

With a fully loaded 7-cell pack, I set the truck down with the TSM all the way off. Turning the truck on, it immediately came alive with the loud, roaring grumble of the OBA system before I shot down the slope towards the ﬁrst jump. The Slash left the ground and sailed with a little nose-down attitude, slamming into the front bumper upon landing. It calmly soaked that up but did get a little unsettled before I headed for the big, asphalt banked turn. Through that turn I launched up to a long table top, landing with a slight hesitation on the throttle as, once again, the Slash twitched a bit. The Slash dropped down off the tabletop and immediately into another long, asphalt banked turn. I kept the throttle pinned as I rode along the top edge of the berm, nearly ﬂying over the top. A short straight led to a pair of double jumps, the ﬁrst of which I cleared without any issues. The second set proved a bit more difﬁcult as I needed to keep my speed up after landing the ﬁrst set. Even though the 4WD system is really good, the hard tires kept breaking traction and I couldn’t seem to get a good, straight run to clear the second set of jumps. This had me leaving the take off ramp sideways multiple times and, well, let’s just say I had a chance to test out the durability of the Slash on the landings. I eventually made it through the course but by this time the battery had faded, so it was time to throw in a new pack and give the TSM a test.

Before unleashing the fully-charged, TSM-enabled 4WD Slash back out onto the track, I gave it a quick once-over seeing as I beat it up pretty good on the ﬁrst run. As I expected, everything was in excellent condition; suspension arms were ﬁne, shocks still felt smooth and the tires weren’t all wobbly. The only thing that showed any signs of novice driving was the body and all the new scratches it had on it. Inspection done, time to go for it! 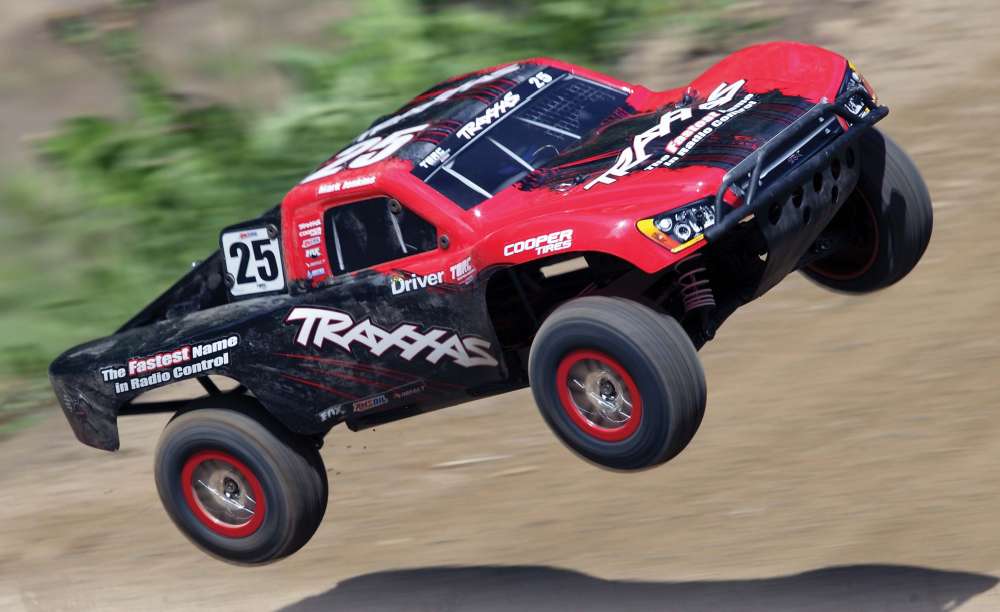 I set the Slash down again, this time rotating the TSM dial (or Multi-Function dial) all the way to 100. I set the truck as the starting line, revved it up to get the sound on and proceeded to blast down the ramp. The truck felt pretty much the same right up until the ﬁrst jump. As I crested the hill, I immediately felt the TSM change the attitude of the truck. The good thing here is that I’m sure this system would help the ﬂight of the Slash while up in the air, but as a racer, I immediately went into ‘attitude adjustment’ and hit the brakes to bring the nose of the truck down. This upset the TSM, and it started to auto-correct … well, let’s just say that the ﬁrst jump was a bit of a mess. The Slash tumbled a bit before landing back on its wheels, apparently ok. Let’s try this again. I initiated my run from the start line again, this time letting the TSM handle the attitude of the Slash in the air. It’s pretty crazy to watch, but you can see it trying to adjust the truck’s attitude when it starts to get all out of whack. The landing wasn’t all that pretty, but deﬁnitely better than when I tried to mess with it. I continued along, powering through the large asphalt berm and into the tabletop jump where I kept full throttle as I landed on top. This time, however, the Slash screamed forward without any hesitation. The TSM took over and kept the Slash pointing straight ahead as I dropped down and towards the next berm. Through this berm I went, lining up the pair of double jumps, only lifting slightly to adjust my speed so I wouldn’t overshoot the ﬁrst set of doubles. As I landed, I pulled full throttle and easily cleared the second set; the TSM kept the spinning stock tires in check and the Slash pointing straight, allowing me to easily convert the pair of doubles. 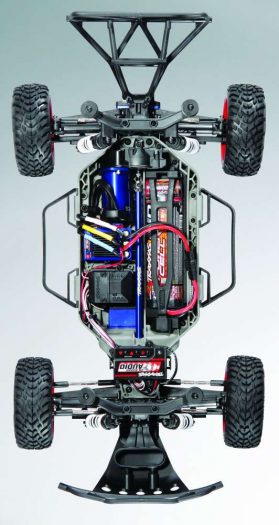 The Slash is probably one of the most popular Short Course trucks in existence. Traxxas is constantly evolving the platform to not only perform better, but to also offer more value to the customer. The truck itself is marvelous, providing a simple platform that is easy to work on for both parts replacement or maintenance. The OBA is cool, giving users an audible cue that they’re driving something that replicates a full-size, 900hp offroad truck. Finally, the TSM. It’s an amazing system for beginners learning throttle control or for those that don’t have a nice prepped area to drive their trucks. I can’t wait to see what they come up with next.