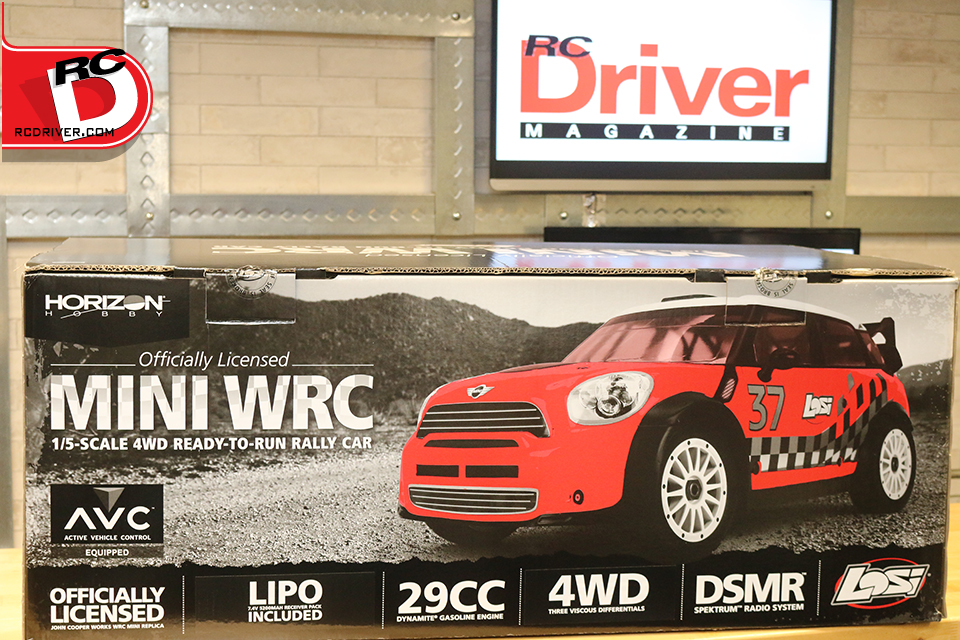 If you demand all the attention when out having fun driving with your RC friends, then this is probably the next machine to make its way into your RC stable. The Losi 5IVE MINI WRC has landed, well, was heaved onto the RC Driver Reveal bench so we can relay our initial impressions and details of this new addition to the 1/5 segment in RC. We saw this machine first at the 2014 Toy Fair in Germany and were among the first to show it to you through our social media feeds; you do follow us on Facebook right? At the show, you couldn’t get near this machine, all that it was brought gridlock to the Horizon Hobby booth. Interested people commented on its big size, some in awe of the 29cc engine stock, some drooling over its licensed Mini body and detail. There is certainly a lot to love about the Losi 5IVE MINI WRC. Lets take a closer look.

INITIAL IMPRESSIONS
The box is big, real big, so if you’re friends with your UPS or FedEx guy, prepare for that friendship to end when he or she has to lug this box to your doorstep. I feel for the stock up guys at the LHS too; eat your Wheaties. But once you break into that box you’ll see the 5IVE MINI nicely wrapped up in protective plastic with card-board protection as well. As we pulled the plastic wrapper off like it was a birthday present, you instantly get giddy seeing the impressive officially licensed replica of the John Cooper Works World Rally Championship (WRC) MINI Countryman body. The bodies 3-piece design is well-detailed and wraps around a full inner roll cage. The cage bolts and clips to the chassis much like the 5IVE-T with access to the internals through the front windshield vent and the driver rear window where you can access the pull start. That’s when we noticed it, a pull start. The first version we saw had a prototype electric on-board starter and fuel injection and the photos of the car still show the equipment  on Losi’s site (editors note 3/9/15: photos have now been changed to reflect a standard engine). But somewhere along the line it appears the electric starter was ditched for the tried-and-true pull-starter. We’re actually not deeply saddened by the loss of the electric start, it was just neat option and we’re sure it loss helped keep some end cost down.

After grabbing a 4mm hex driver we pulled the four cage screws off, removed four big body clips and pulled the body off to reveal the chassis. We instantly noticed a small etching at the back of the chassis where it says “Licensed By” and has the BMW logo below it. Very cool! Its here we also noticed a new low rear chassis brace, probably for aftermarket pipe clearance. The arms on the 5IVE MINI are noticeably shorter than the truck version which means the driveshafts are also shorter. The towers and shocks are shared as well as the hubs, knuckles and hardware. The impressive 8IGHT Buggy inspired drive-line is also carried over here, but the big change is the engine. A Dynamite 29cc gasoline engine sits ready for action. The engine is fitted with a large muffler and an oversized composite plastic sardine can looking air-filter. If you’re wondering where the air intake is on the box, its vented at the bottom.

The radio box with large scale servos sits on the opposite side of the engine and the included LiPo battery is already sitting in its rearward box. But in the receiver box, there is a new addition to the 5IVE RTR platform, a Spektrum SRS4200 receiver with AVC control to help tame this wild beast for those throttle happy drivers. New front and rear bumpers are used to accommodate the new body set-up and new wheels with aggressive Losi Rally Trekk tires wrapped around them for all terrain traction.

After checking out the chassis and details for quite some time, we moved on to what else was included in the box. A detailed manual, the included Spektrum DX2E radio with batteries, some tools and a bottle of 2-stroke oil mix.

WRAP UP
Losi’s 5IVE MINI WRC managed to gain everyone’s attention in the RC Driver’s office to the point phones were ringing and going to voice mail because checking out this beast was more important. There isn’t much else you need when you pick up this RTR, a charger for the LiPo battery, a gas can and pump gas. We already have that stuff on hand and are eager to get plenty of wheel time in. Watch for a full review of the Losi 5IVE MINI WRC in an upcoming issue of RC Driver Magazine. You do have a subscription to that too don’t you? Don’t miss it, renew or subscribe HERE.