How many times have you heard your buddy brag his RC machine goes over 100-blah-blah mph? We’re betting way too many times. So there’s a few ways to have your buddy prove his car is the fastest machine on earth. One, you can see if you can pal up to local law enforcement to have them radar your machine, but this isn’t a route we recommend. Another is to use an app on your smartphone, strap it to your car and track the speed. Another not so recommended option as we’ve heard many stories of crashes with ejected and destroyed phones. Our recommended option is to grab a dedicated speed meter like the Dynamite Passport GPS Speed Meter like you see here. Dynamite’s awesome Passport GPS Speed Meter is a standalone GPS system that you can mount to almost any RC vehicle and it does a lot more than just display speed. Let’s take it for a high-speed spin! 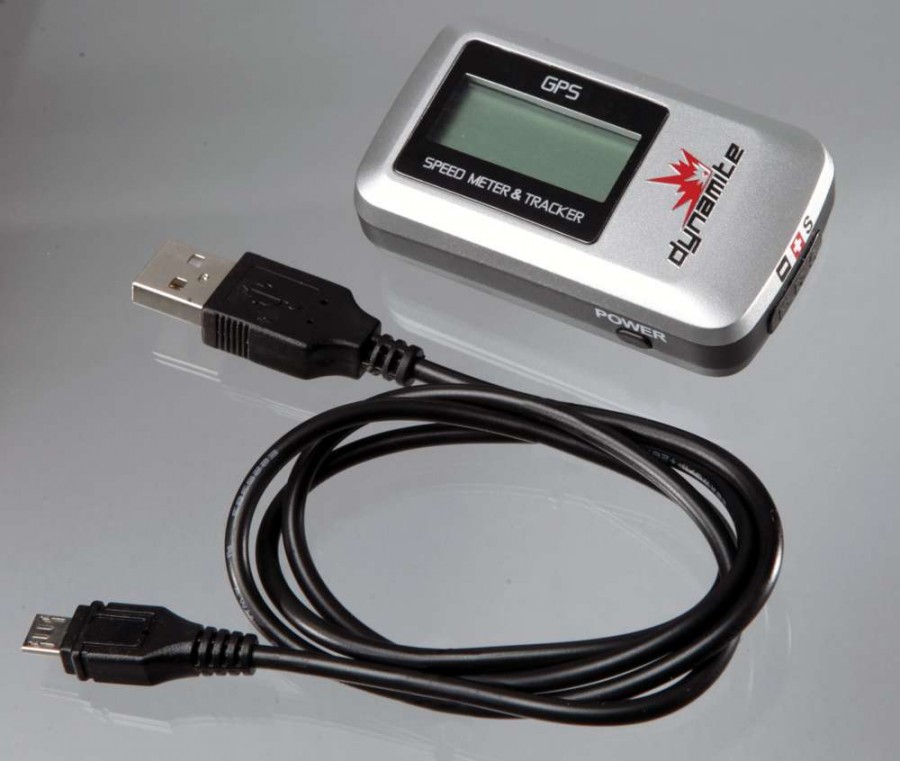 THE GOODS
Opening the box reveals a small foam inner tray that holds the GPS meter and USB cord. The Passport meter itself is tiny (in comparison to the box), measuring only 64x37x20mm in size, and features a nice LCD display, three buttons around the outside and two external ports; a USB port and a charging port. The unit is waterproof and uses a built-in WASS/EGNOS/MSAS/RTCM, making the GPS system compatible in different countries. It also has a 10Hz refresh rate that provides fast response to changes in the vehicles’ position. I was curious as to why the box was so big so I pulled up the foam tray and found the instruction pamphlet. This pamphlet is huge when unfolded; let’s just say that I’ve seen actual maps that are smaller than this pamphlet! Thankfully the info for mounting, initialization and user modes is compact; it’s written in several different lan- guages for use around the world.

Once on, pressing the Mode button allows you to cycle through the different modes. These modes include Current Speed, Peak Speed, Average Speed, Latitude, Longitude, Altitude, Peak Altitude, Trip and Time. Yes, it records altitude, which means that not only will the GPS Speed Meter work with surface-based vehicles (cars, truck, boats, etc), it will also work incredibly well with aircraft!

THE WORKS
Greg and I looked around the office for something really fast to test the Passport Speed Meter. After a few minutes of, “What about this?” and “What about that?” we decided to put it in something that was built for pure speed; the Traxxas XO-1 Super Car. The XO-1 has plenty of room in it to mount the GPS and is capable of hitting over 100mph in stock form, so this became the test bed for the Speed Meter system.
After charging the Passport, we mounted it to the top deck of the XO-1 by adding a healthy strip of double-sided tape and firmly pressing it into place. The next step was to initialize the GPS system, so we took the XO-1 outside where the Speed Meter could get a clear view of the sky. After about 20 seconds, the satellite acquisition icon stopped blink- ing, letting us know the Speed Meter was ready to track our vehicle.
To verify the accuracy of the unit, we dug out our trusty Stalker Radar Gun and did some slow passes to see how the two compared. At lower speeds, both the Passport and Stalker gun were within a couple tenths of each other. Once we started gaining more speed, the gap between the Speed Meter and the Stalker started to lengthen; the Speed Meter would register about 3-4mph over (sometimes more) the Stalker Radar Gun. This was a bit of a concern so we decided to mount the Speed Meter to the hood of my truck and shot the radar gun at that. With the larger frontal area of the truck, the GPS and Stalker speeds were very close again. The low profile and lack of front end reflective- ness of the XO-1 was causing false readings with our radar gun, con- firming that the GPS Speed Meter, being mounted directly to the vehi- cle, was most likely an incredibly accurate measurement.

WRAP UP
For those of you that want to know how fast your RC vehicle is going, the Passport GPS Speed Meter is an excellent choice. It’s compact, easy to use and can record quite a bit of info on your run (or flight). There is even GPS Logger software available that lets you map your drive or flight using Google mapping products. While I’m sure most of you are chomping at the bit to give this GPS a go, I’m also thinking about other uses; jogging (distance, or Trip), swimming (the same, with waterproof), hiking (altitude) … heck, even attaching it to my dog to see how fast she runs! So the next time you get the question, “How fast does your RC car go?” you won’t just be able to tell them, you’ll be able to show them!