Our RC hobby has so many things to offer like the various types of vehicles to choose from, the numerous manufacturers that constantly create innovative and exciting new products, the choice of either going with an electric or combustion engine powered vehicle and the massive amount of hop-up upgrade parts that can make an RC vehicle faster, improve its handling, enhance durability and alter it looks. One aspect that always impresses us here at RC Driver is the inspiring creativity of our fellow hobbyist. We decided to highlight four must-see custom Tamiya vehicles that are incredibly unique and are quite a transformation from their stock, out-of-the box beginnings. 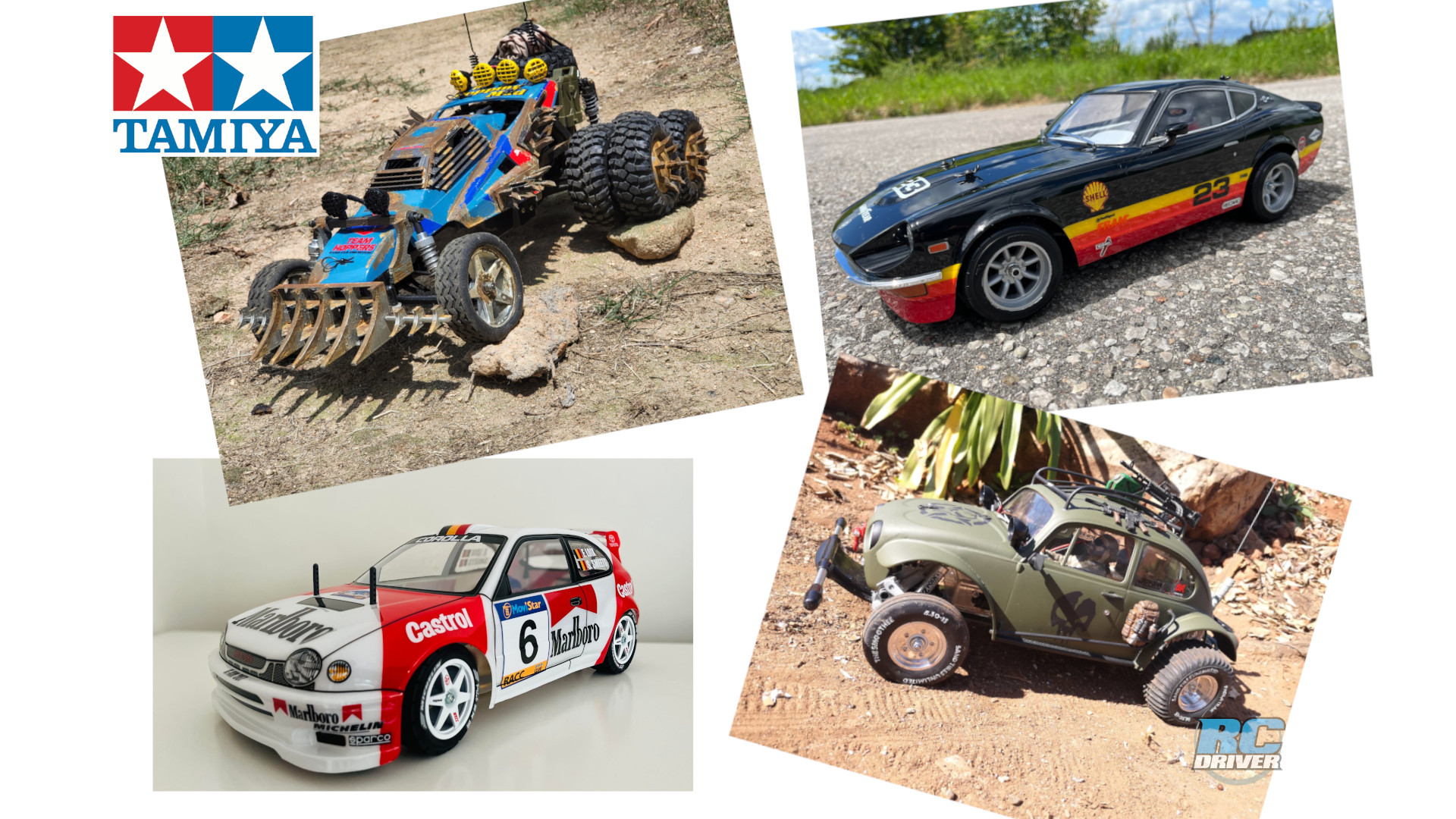 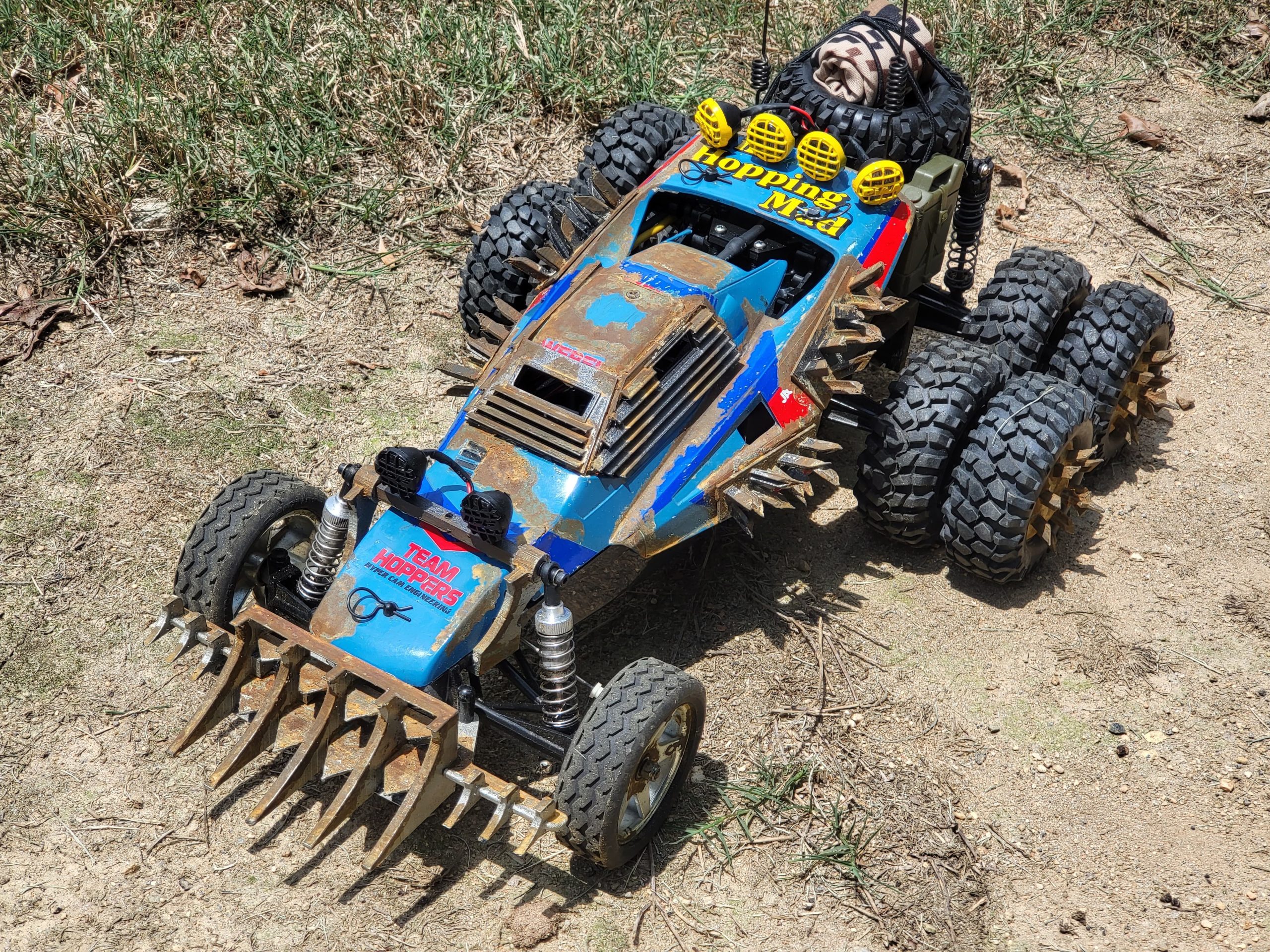 Kicking of the four must-see custom Tamiya vehicles is Duke Walker’s Dual Axle, Dual Motor Grasshopper II six wheeled machine. It is the wildest looking out of the bunch and is a great illustration of the creativity that is out there.

Duke tells us that he started in the hobby back in the mid-80’s with the Tamiya Blackfoot 2WD monster truck as his first hobby-grade RC vehicle. Then as is typical in life, Duke was pushed in other directions and was pulled away from the hobby for about ten years. After that time, Duke credits Tamiya as the brand that brought him back into RC and he has been going on strong ever since.

Kit building is a big draw for Duke and he enjoys creating the unique and the different. Duke states “The experience and feeling of accomplishment when finished a build is well worth the work.” Now that he is older, he is able to acquire a lot of the products he always wanted when he was younger which makes it possible to create some awesome custom rides. This is where the vision of the Dual Axle, Dual Motor Grasshopper II was born. It was more of a, could it be done, than anything else. Inspired by the dual axle Tamiya Clod Busters, Blackfoots and Frogs that he has seen, he realized he never saw a dual axle Grasshopper II and the build began. 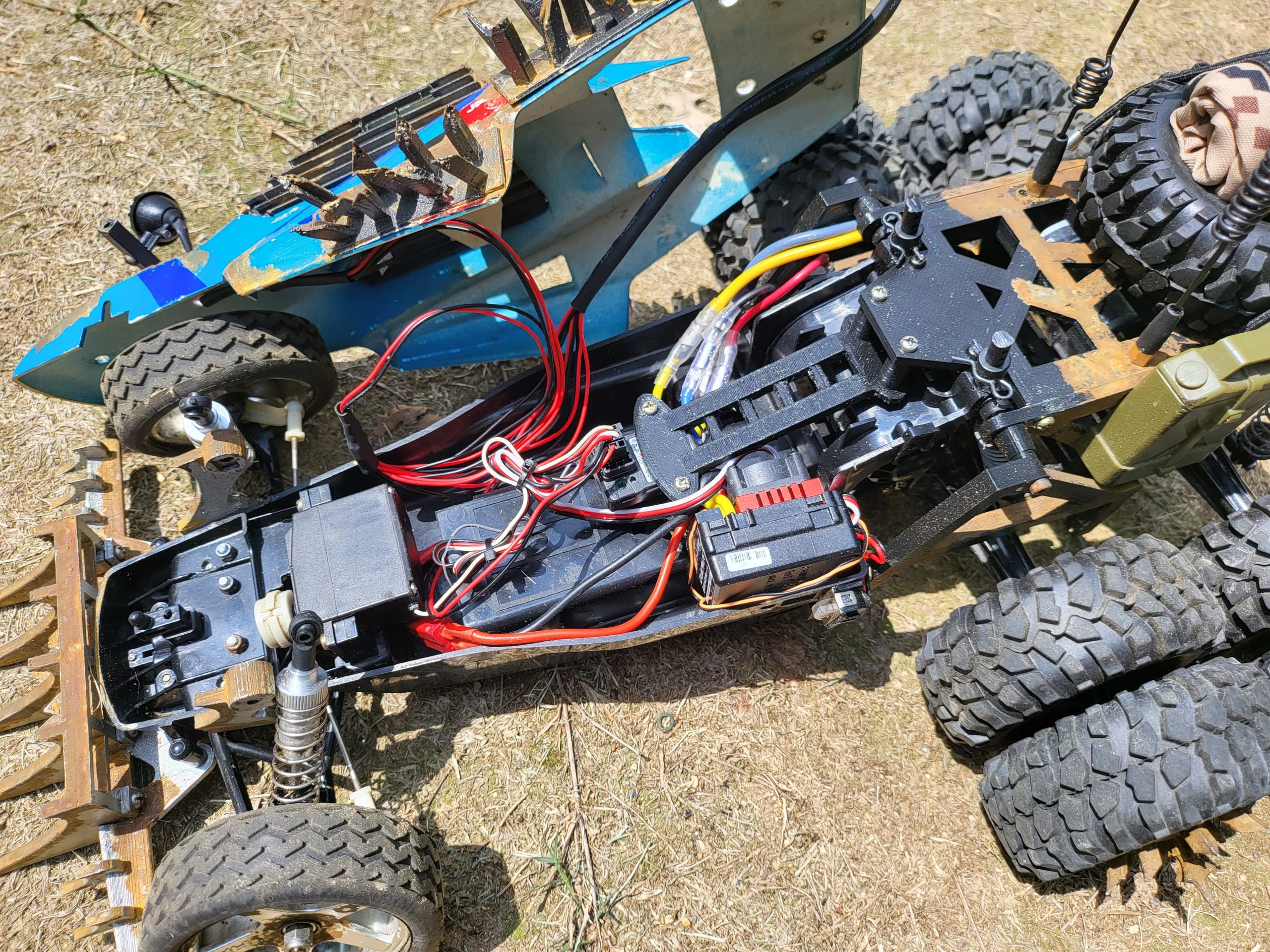 The main chassis was pretty much kept unchanged except for the front shock tower. The rest of the chassis gained some add on parts here and there. One issue Duke ran into was a load of chassis flex when he added a chassis extension piece. He remedied this issues with 3D printed inner and side chassis braces. The second axle mount was designed like the stock chassis. His goal was to achieve the same axle twist and suspension flex as a standard Grasshopper II. The dually wheels were not part of the original designed and were added out of necessity to provide more stability when at speed. He accomplished this modification with wheel extensions that he designed and 3D printed. At this point the wasteland vehicle concept was solidified due to the design of this off-road vehicle.

Duke runs dual 55-turn brushed motors that are controlled with a Hobbywing 880 brushed speed control. This setup provides all the speed he wants and there is plenty of torque for when he uses this rig to pull his homemade 3D printed trailer. 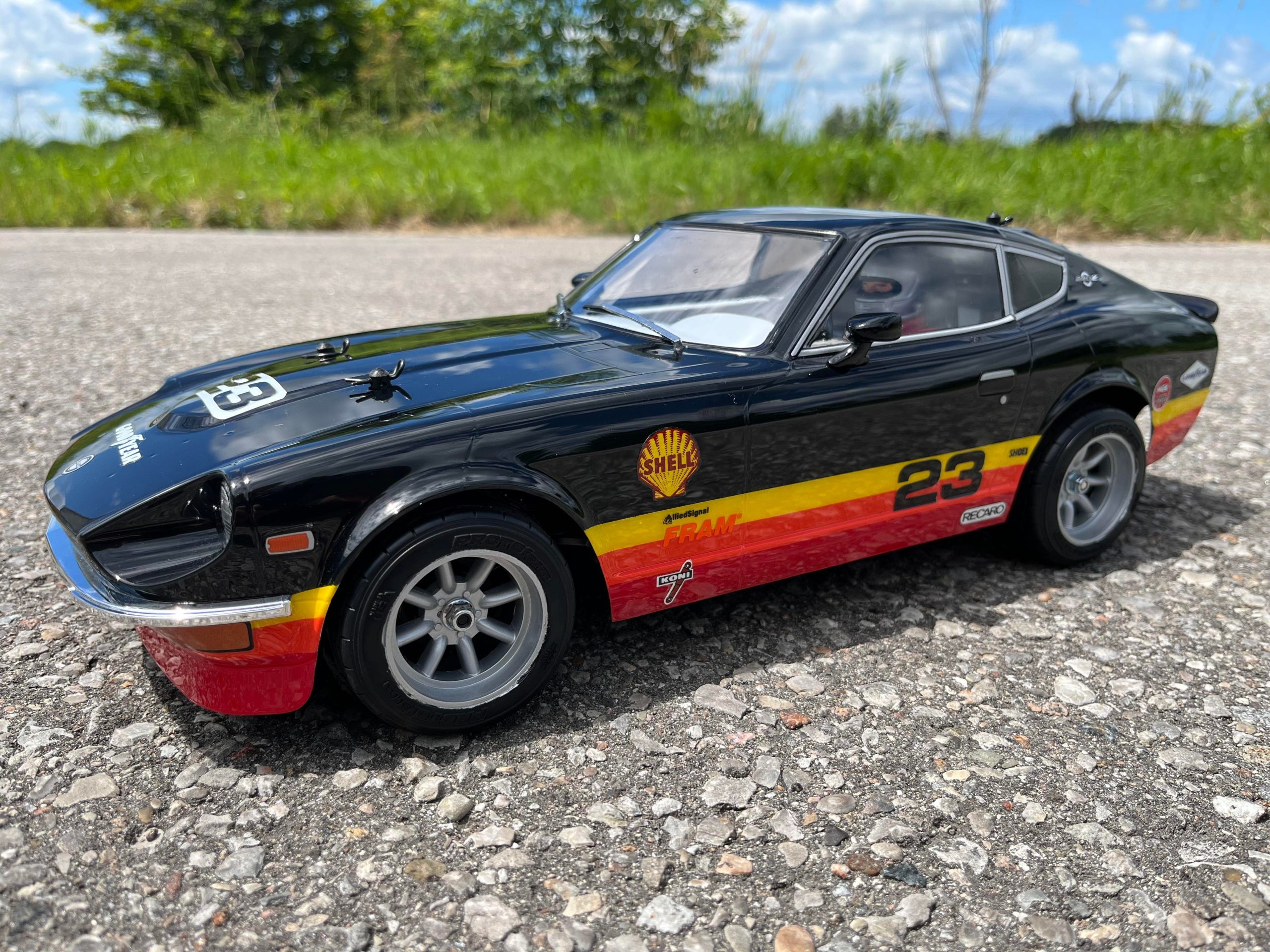 Here we have an excellent example of a very well executed realistic custom build. This is Chris Silver’s custom Datsun 240Z that rolls on the proven Tamiya TT-02R touring car chassis.

Chris has been actively in the RC hobby for approximately 40 years. Like the countless number of people in his generation, Chris’s very first hobby-grade RC car was the Tamiya Hornet 2WD off-road buggy. That one car was what set the hook in Chris and has helped to keep him in the hobby for so long.

Throughout the late 80’s and into the early 2010’s, you would be able to find Chris racing at the local track. He started off racing off-road and wheeled racecars from Associated and Losi. In the late 90’s, his focus turned to on-road racing when touring cars were all the rage.

The platform for Chris’s build is the Tamiya TT-02R 4WD touring car chassis. This affordable, easy-to-build and maintain chassis makes for a great base for custom builds. Chris kept the chassis mostly in its stock configuration and added a Tamiya GT tuned brushed motor, powered by a Hobbywing 1060 electronic speed control. To handle the steering duties, a Hexfly standard servo was installed while a Spektrum DX5C radio system keeps his ride in full control. 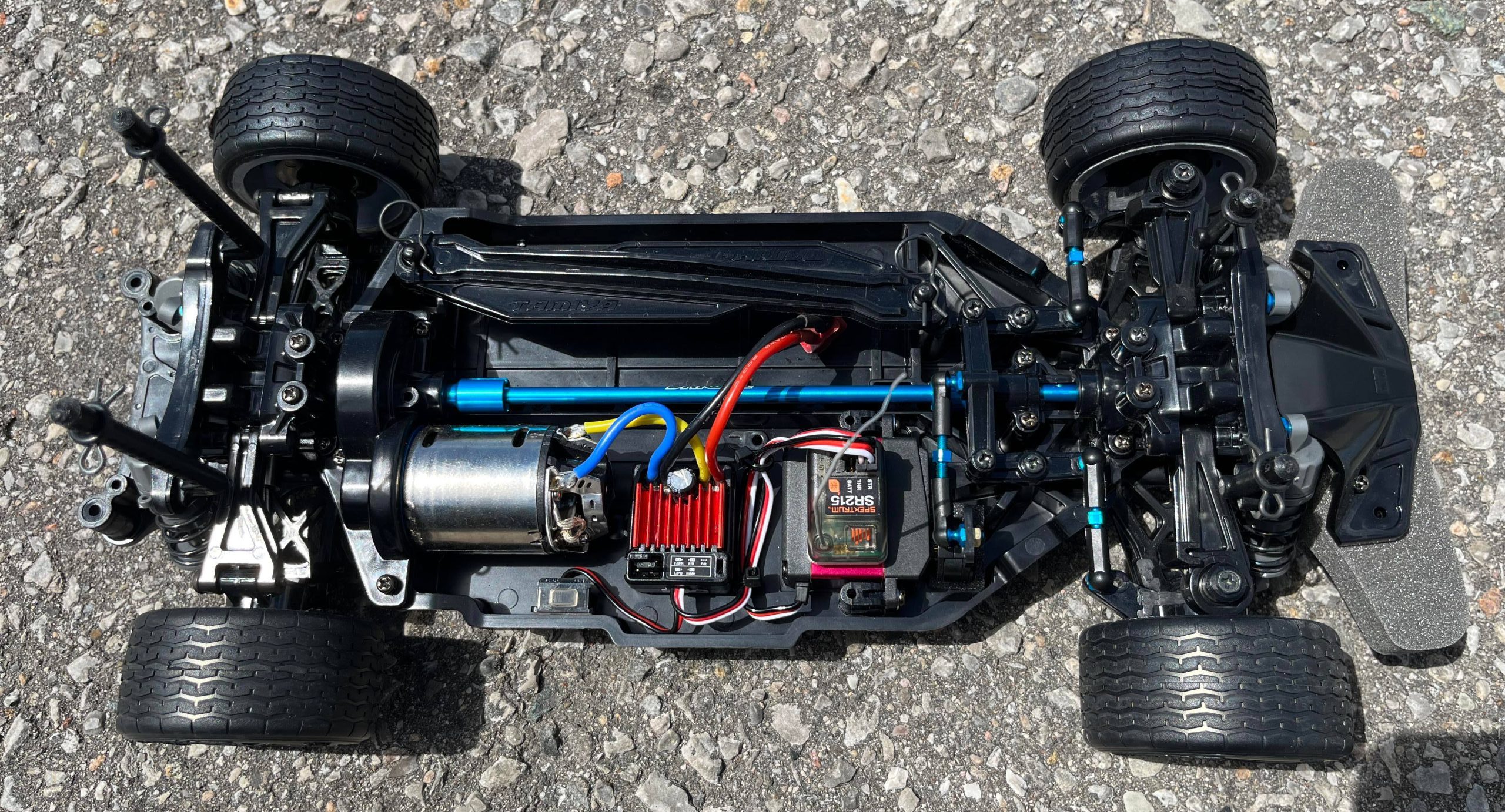 Clearly the star of this build is the classic Datsun 240Z polycarbonate body from Tamiya. Chris planned out and gave the clear body a stunning vintage race pain job complete with car numbers and sponsorship decals. Tamiya includes some chrome plated plastic parts with the body and Chris utilized the front bumper. In order to push the custom look and make it look more realistic, Chris made homemade windshield wipers and installed a faux tailpipe. Next he 3D printed the plastic louvers that cover the glass on the hatch-back and the subtle, but accurate-looking rear spoiler. The side view mirrors were also created by Chris with a 3D printer. The final touch to complete this custom Datsun 240Z was sourcing period-correct looking wheels. Chris went with 31mm vintage wheels and tires from HPI Racing, which was a great choice. 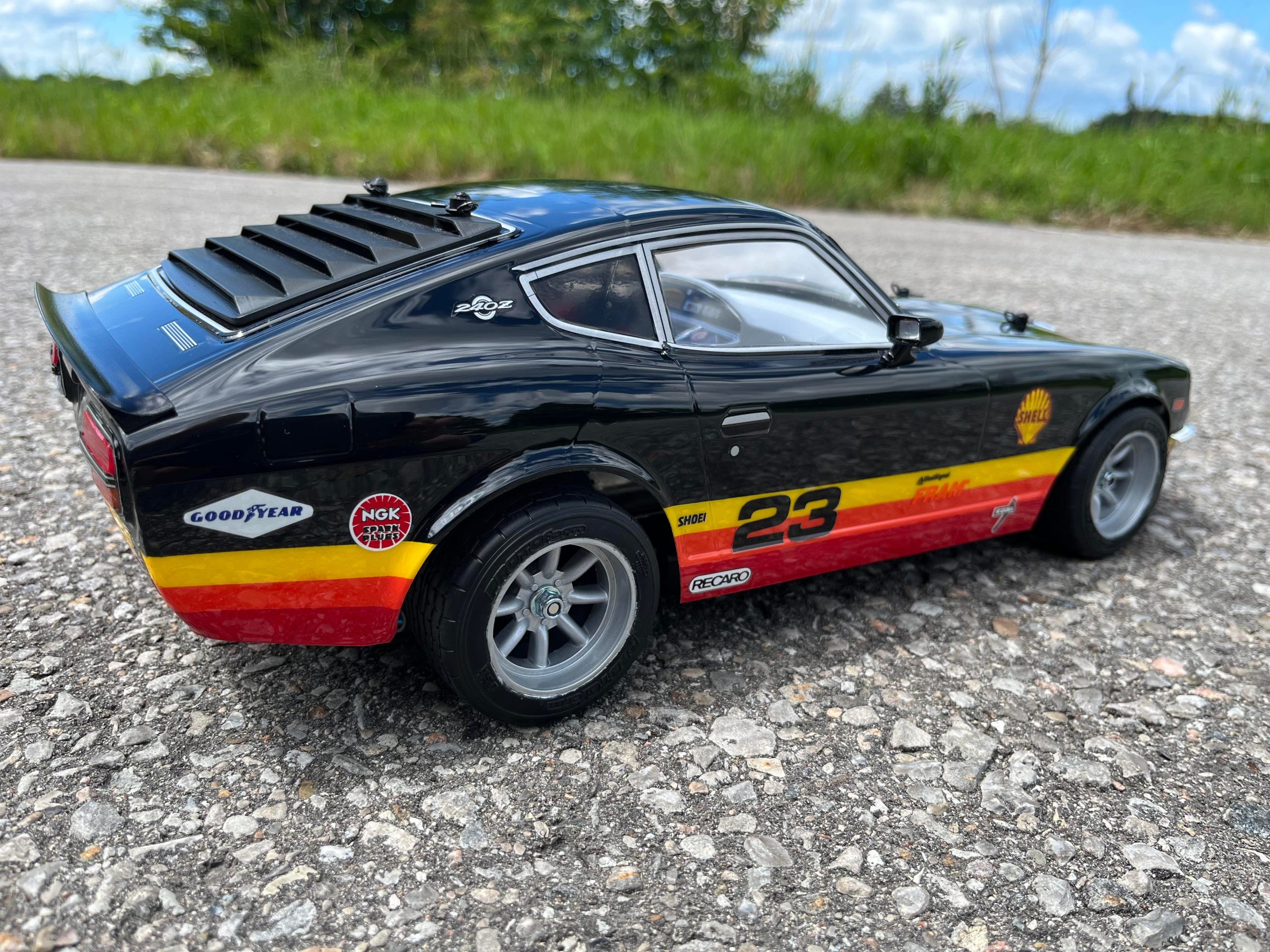 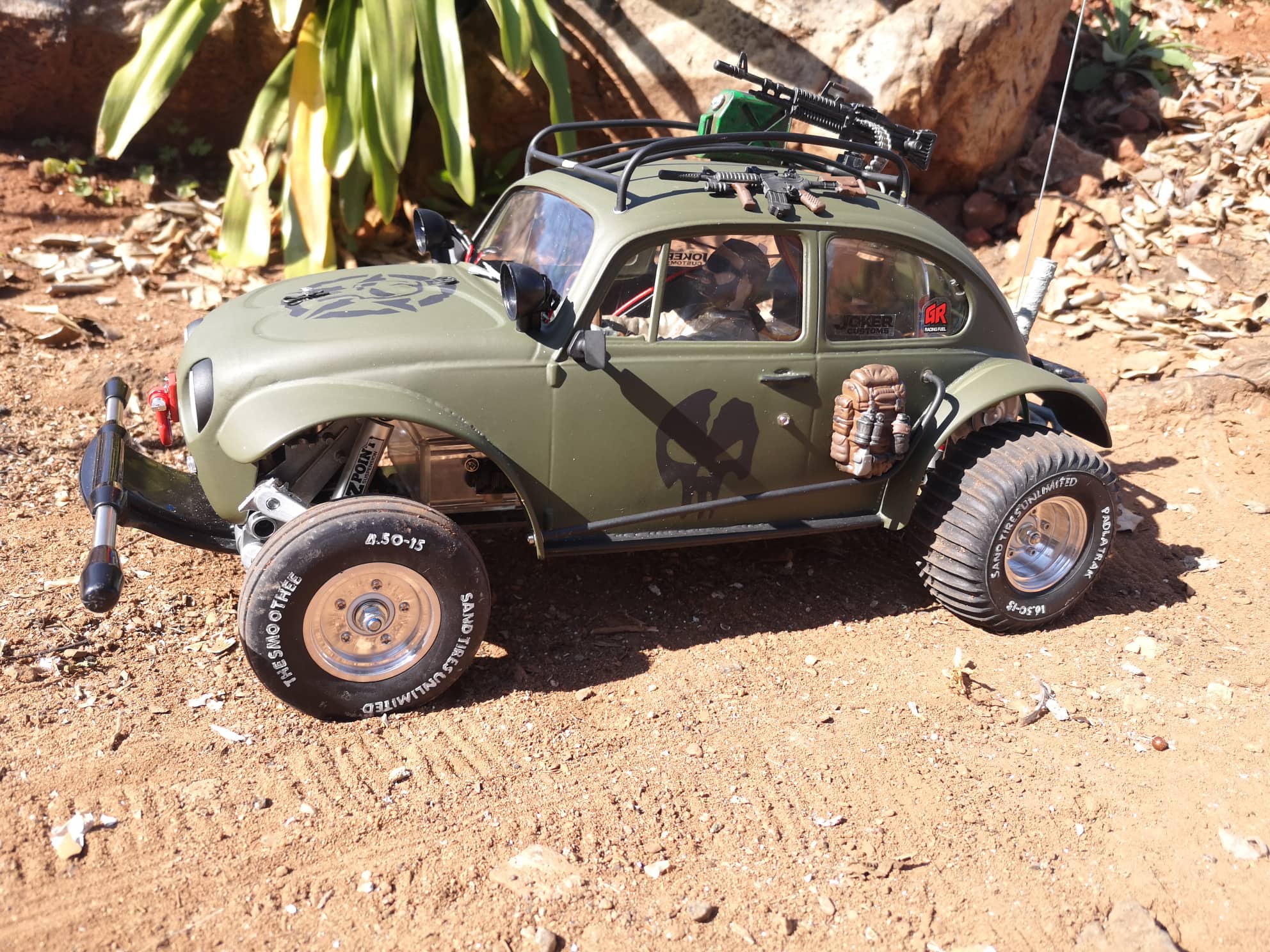 Next we have a custom-made ride with a military theme…enter Pierre Beukes’ custom Sand Scorcher. If you are unfamiliar with the Tamiya Sand Scorcher, it was first released all the way back in 1979 and was re-released in 2010. People were and still are drawn to the well-detailed ABS plastic body which is ideal for custom builds.

Although Pierre does not have as much experience in RC compared to the other builders featured here, his Sand Scorcher turned out quite well. Pierre started in the hobby about three years ago with the Tamiya TT-02 chassis. He had a blast with it and really liked changing the bodies to alter the looks of his RC.

One day, while hunting for a new body, Pierre came across the Tamiya Sand Scorcher body kit and immediately just had to have it. Unfortunately, the length of the Tamiya TT-02 chassis was too long. He decided to try modifying the chassis and after some trial and error he was successfully able to run the Sand Scorcher body on the TT-02 chassis. This led to an obsession with the iconic Tamiya VW bug hard plastic body to where he now has several RC builds completed with it. Here are three examples:

Pierre tells us that for a long time he wanted the Tamiya Sand Scorcher kit and had a very difficult time getting his hands on one since he lives in South Africa. Once he ultimately got one, he was beyond thrilled and got right to working on body design concepts. He ended up landing on a military theme and it stuck as you can see here.

Under the customized VW shell, Pierre wanted to keep the Sand Scorcher chassis in its stock configuration right down to the motor and gears in the tranny. Once the chassis was built, he got to work on adapting the body to his vision. Tamiya Olive Drab (TS-28) spray paint was the perfect choice to give him the matte military green color. He then created his own templates and painted on the skulls you see on the hood and doors of the Scorcher body followed by a coat of flat clear. 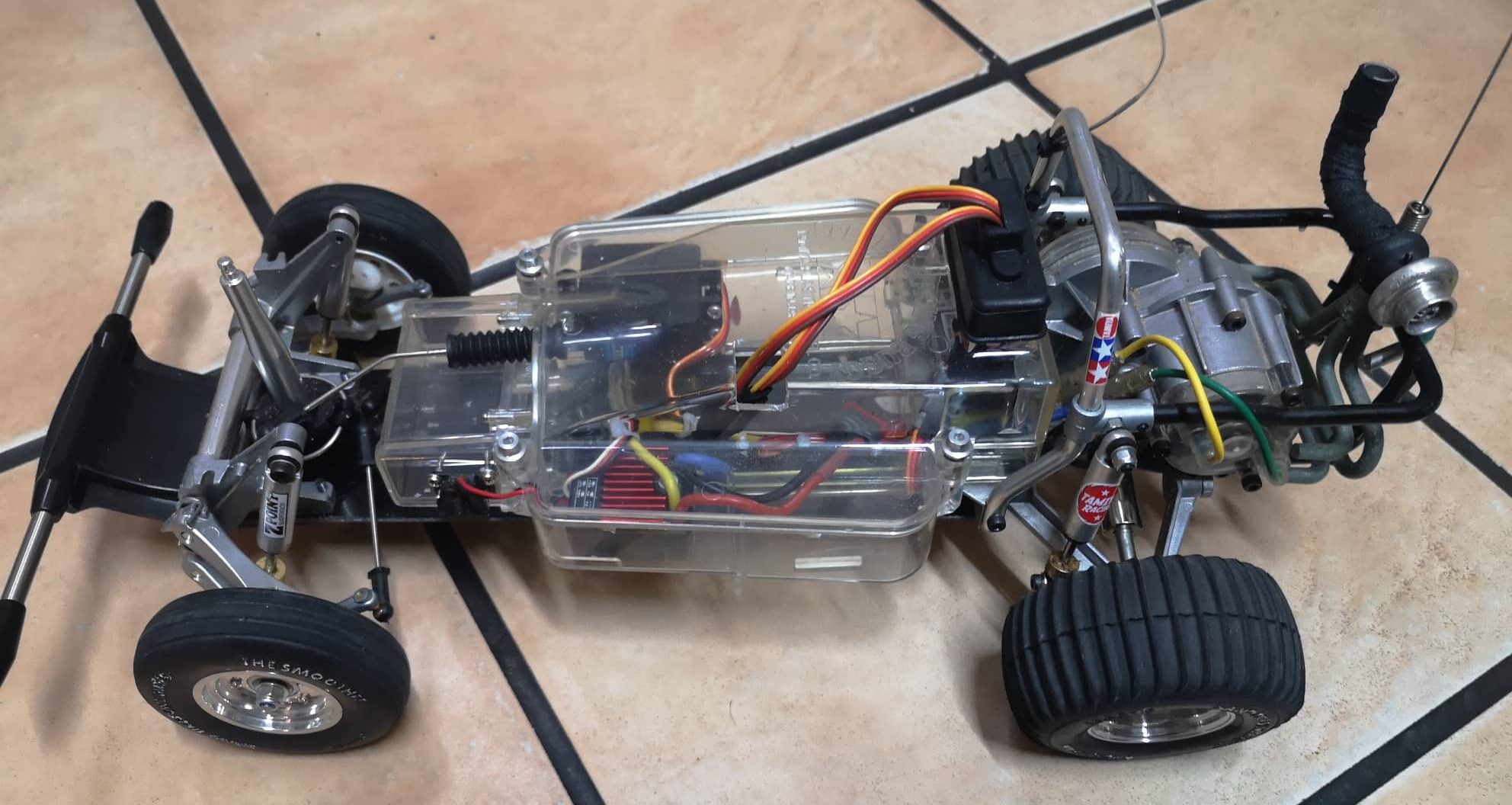 Next he hunted down the accessories to complete his personalized build. Toy military action figures came to the rescue so that he could have a scale looking driver. He added sunglasses and a cigar in his mouth. To up the cool-factor even more, the driver’s head is actuated by a micro servo so that it turns when the wheels turn. Along with the figure came objects that he attached the outside of the body like the weapons and rucksacks. The roof rack and nerf bars are home-made by Pierre using soldered brass tubing. At the rear, he revised the exhaust pipe with a turbo charger. The finishing touches are his homemade machined aluminum wheels that he wrapped with the stock tires to which he added white paint for the lettering. 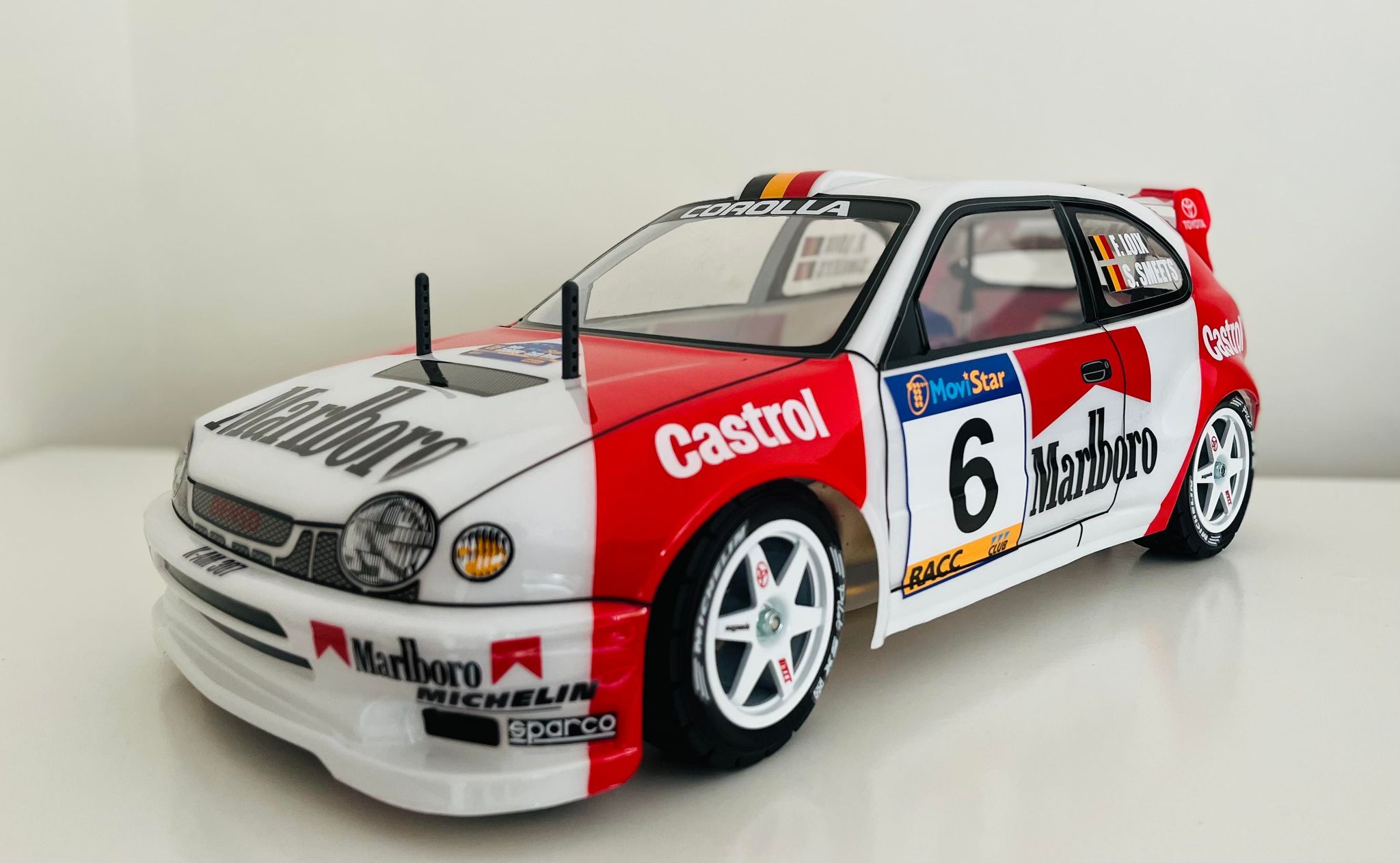 Ending our list of four must-see custom Tamiya vehicles is Jon Courage’s highly modified Toyota Corolla WRC that rides on the nitro-powered Tamiya TGX-Mk.1 4WD chassis. Now don’t quickly write this rally car off assuming that it is just a custom painted body because the chassis has been heavily upgraded.

Jon’s journey in the RC hobby started when he was a child and he luckily scored the Tamiya Fiat Abarth 1000 TCR Berlina Corsa touring car as his very first RC vehicle. The Abarth is modeled after a classic racecar that successfully competed back in the 1960’s and this is what helped build Jon’s affinity for racing and RC. At the time, it was his one and only car.

Fast forward to 2019 and things have changed quite a bit for him. Jon tells us it was that point in time where he started building and painting seriously. This has pushed his RC collection way passed owning a single car to where he now has countless rides. His collection is mostly composed of on-road cars and rally cars like what you see here. Each one is expertly painted and detailed to achieve a realistic finished product. The other common thread are all the nitro-powered cars he owns. As a precision engineer he is naturally drawn to these vehicles due to his love of engines.

This brings us back to the Tamiya rally car we are featuring here which is the ideal representation of what Jon’s collection is all about…rally and nitro powered. Jon explained that the Toyota Corolla WRC TGX-Mk.1, new in the box was amongst the rarest for him to find. After an exhaustive search he surprisingly found a couple of them and instantly acquired them. He took one and built it to perfectly match the Castrol livery box art. For the second Toyota Corolla WRC, he decided to replicate the Marlboro livery that was used during the late 90’s on the Corolla WRC.

When Jon started to work on the body, he knew that tracking down the Marlboro stickers would not be easy. That is until he came upon MCI Racing, who makes complete sticker sheets to recreate the famed Marlboro Toyota racecar. Once he had the sticker issue sorted he was able to move on and lay down Tamiya PS spray paint for the red and white. The finishing touch on the body was adding the panel lines that help make the car pop. Jon used Kyosho black micron tape.

Compared to his other Tamiya cars, Jon wanted to do something very different for the chassis. He set out to collect loads of hop-up option parts which ended up taking several months. The time he invested was well worth it once you check out the chassis. Here is a list of the upgrade option parts he was able to source: 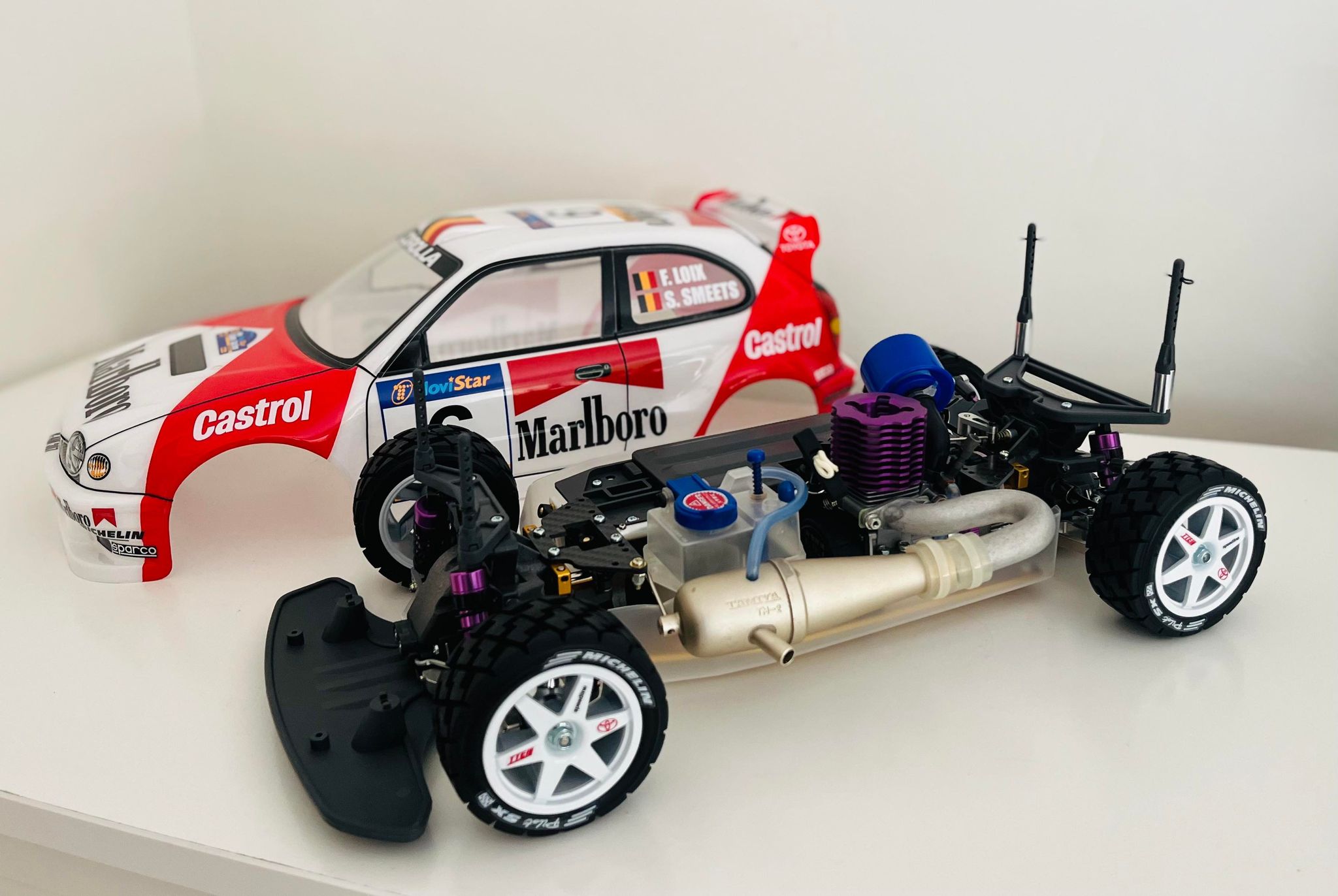