Perhaps you’ve heard about the Traxxas Drag Slash? It’s one of the most hyped releases of 2021 so far and the final unveiling just happened! With that, we got our hands on one of the first trucks to be released. This truck is a very exciting launch for the RC Drag car community. It’s based on the Traxxas Slash which many drivers have already been using as a base for their No Prep RC Drag car builds. However, like always, Traxxas has put their spin on this machine. They gear their products to be very helpful to entry-level drivers and from there, the sky’s the limit for what you can do with them. The Drag Slash is just that, a truck built to get people into RC Drag Racing with success thanks to a proven platform and some well thought out features that will make this truck easy for anyone to drive. Let’s talk about some of those details in our Traxxas Drag Slash First Look! 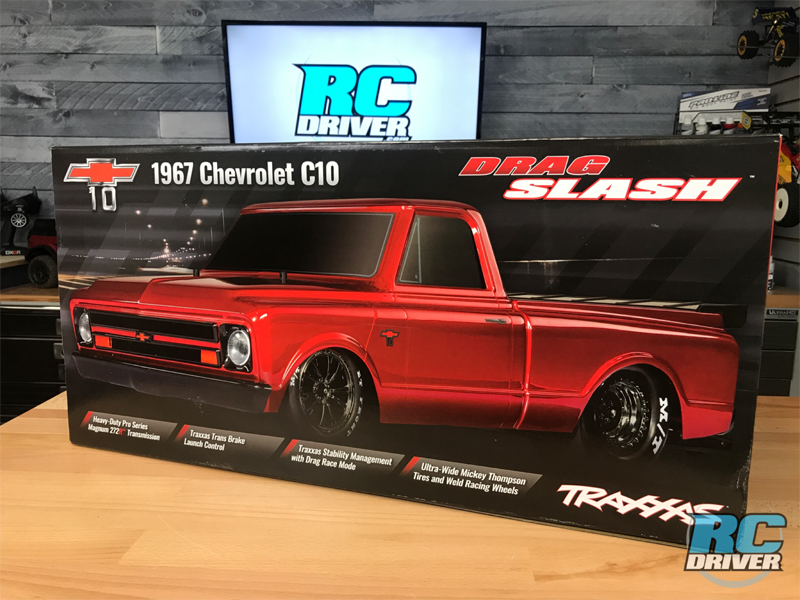 In the Drag Slash box is the assembled and painted ready to run truck. The electronics are installed, the radio is set-up and there is a bag of support items like tools, pinion gear, instructions, decals, clips and screws to support the truck. The wheelie bar will need to be attached and you have to supply a charger, LiPo battery and four AA’s to get it going. 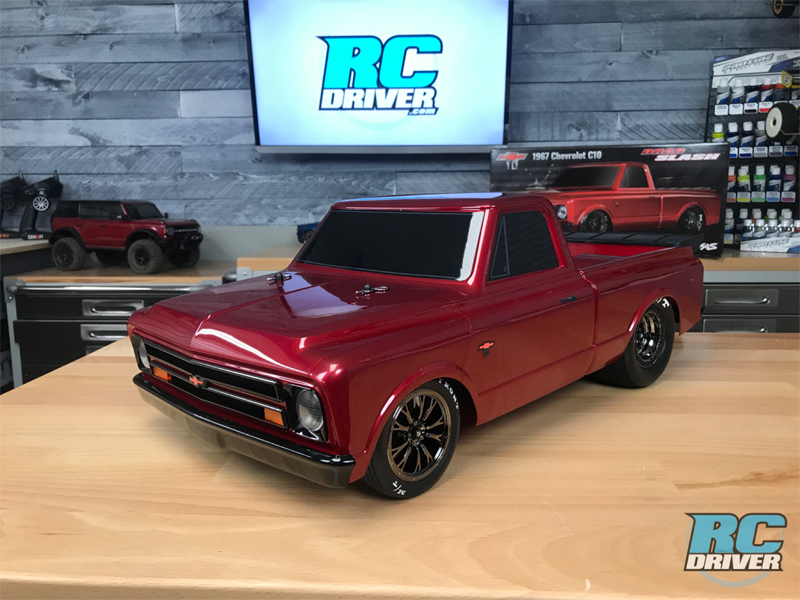 Traxxas has really stepped up their scale body game and they carried that to the Drag Slash platform. Sitting on top of the chassis is a fantastic interpretation of a 1967 Chevrolet C10 drag truck. The front bumper is a molded separate piece, the grill has excellent detail and you can even insert your own LED’s into the headlights and turn signals. Out back there is a flat molded spoiler, molded bumper and the bed detail looks killer with the wheel tubs they designed. The body is available in a variety of colors, but the windows are decals which is the only part of this body that bummed us out. 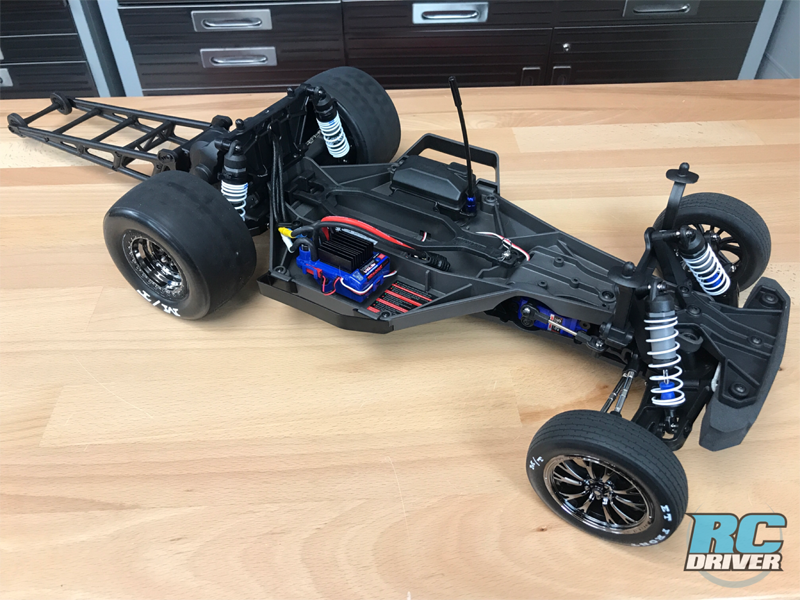 If the center section of the chassis looks familiar, that is because it is! It’s a LCG Slash chassis that we’ve seen before, just in the grey color option. Same lower front plate, same twin bell-crank steering, battery strap, radio box, front bulkhead, no real changes here. Is that bad? Not necessarily, it’s all proven parts that work well and are durable. The changes come in starting with the front bumper. Rather than slapping on a Bandit mini bumper like builders have been doing, Traxxas created a multiple piece front bumper with foam bumper insert to brace the front of the body. The drag truck gets its front body mount from the 2WD monster truck line just flipped upside down, but the rear shock tower with body mounting bosses is new to accommodate shorter shocks. It does have holes to adapt their rear Slash body mount if you want to put a different body on this beast. To wrap up the chassis details, we’ll throw the wheelie bar in the mix. It’s a molded multiple piece bar that extends 10″ from the motor guard mounting point to the end of the bars, not including the wheels. Two sets of wheels come in the kit for tuning, the larger is installed. 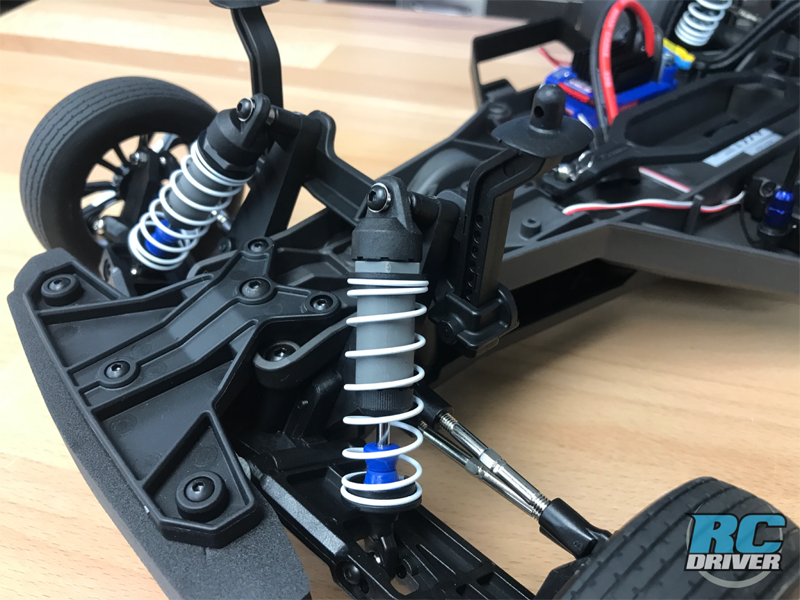 More familiar parts can be found on the suspension. Up front Traxxas Bandit arms, caster blocks, tie rods and knuckles are used to make up the suspension and fit the narrower width of today’s drag car bodies. The shocks are composite big bores with limiters and bump stops for a proper ride height. The rear too shares suspension parts with the Bandit like the arms and hubs, but the shocks instead of being long are short like the front. The shocks appear to have been filled with a worthy oil too. They do not feel like they have a standard 30wt, there is much more resistance which indicates a thicker oil which is preferred in an on-road car. 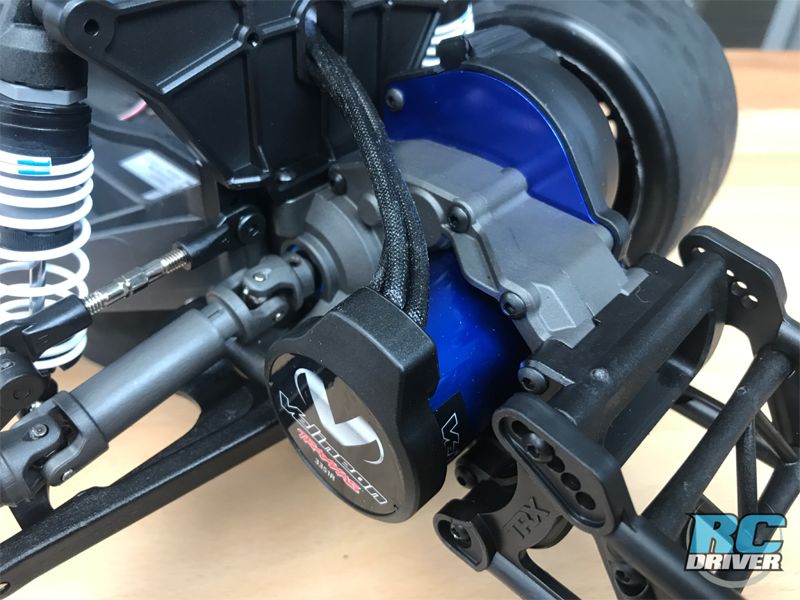 The transmission on the Drag Slash has been pretty big news as it has been redesigned from the ground up. The low built Magnum 272R transmission features a tough sleek gearcase design. Inside is packed with bearings and steel gears to handle the abuse of power thrust through it. A new differential gets spider gears instead of the older planetary style and the diff is also sealed to hold oil versus just being stuffed with grease like its predecessor. The trans is fitted with a T-6 aluminum motor plate now which is a very exciting part to see in our book and on the outside you’ll also find a slipper clutch with heavy duty slipper pads. Speaking of heavy duty, the slider driveshafts look like they have been revised and appear much more stout around the universals and they’re molded in a heavy duty grey plastic. Mounted to the back of the transmission case is a new sturdy mount to secure the wheelie bar. Much better than the mount that was there before that twisted under stress. 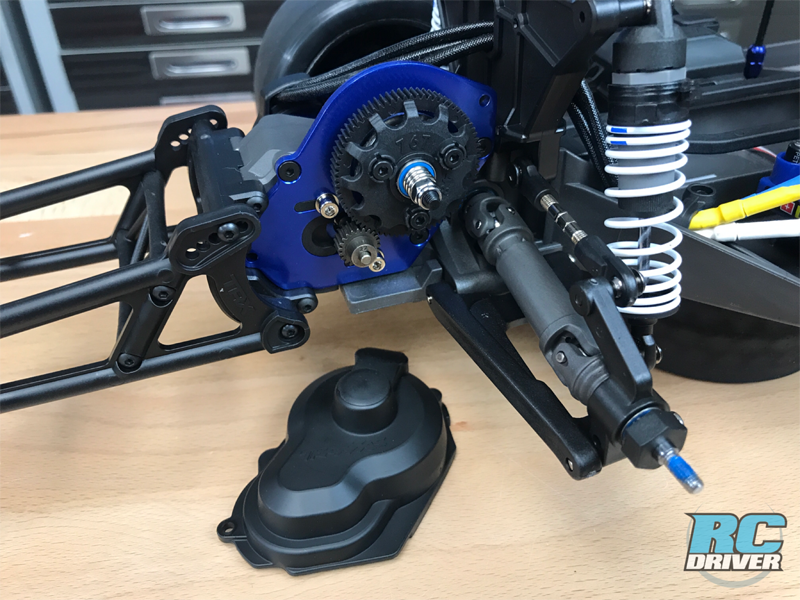 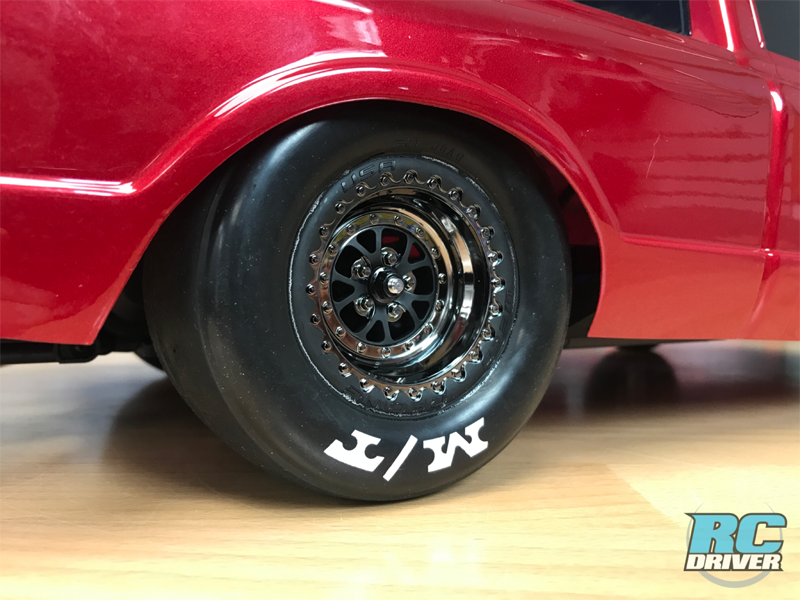 The wheel and tire package look on point for this drag race ready truck! Up front are narrow Mickey Thompson ET Front drag replica tires mounted on a black chrome Weld Racing style wheel with 12mm hex mounted to a standard axle instead of the Bandit front axle. Out back is more Mickey Thompson goodness. Massive ET Drag Slicks with internal webbing and foam inserts glued to Weld style wheels with black chrome detail. A urethane insert supports the tire and it feels sticky from the factory. We can’t wait to see these hook up! 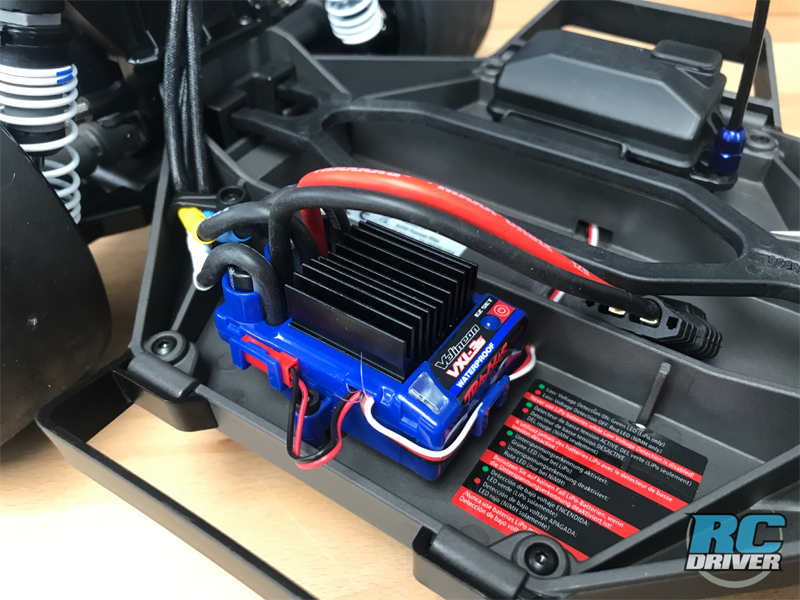 Let’s talk about electronics! Starting up front we have a standard 2075 steering servo that we’ve seen on many Traxxas vehicles. It works. But the real stars here start with the Velineon VXL-3S ESC. This ESC can handle a variety of batteries from NiMh to 2-3S LiPo packs. It’s fitted with heavy duty wire and the Traxxas ID plug. It also features thermal protection, reverse and reverse lockout and can be fitted with a fan. It sends power to the Velineon 3500kV brushless motor which should be just the right amount of power for new drag car drivers. On a side note, the kit does have two pinion gears. One for standard fun runs and one for racing. To control the Drag Slash, Traxxas equipped it with a TQi radio and receiver with TSM which stands for Traxxas Stability Management that adds electronic correction to the car to keep it under control. We see social media keyboard warriors getting wound up about this for no reason. TSM will help new drivers learn to drive their Drag Slash and keep it stable for them. Once they’re comfortable or ready to hit the race track, it can be turned off! Simple, easy and it has a blinky mode to show race directors it’s off. That’s not all, this system has the ability to shut the TSM off for the race, but still have it on under braking to keep the car stable while slowing down. Yes, all TSM functions can be shut off too.

But next we need to talk about the Trans Brake. Another cool function for racing against friends. Trans Brake allows you to hold full throttle while depressing the red thumb button on the radio so you can launch at full throttle when you release the button. How cool is that!

The new Traxxas Drag Slash is an exciting release to the RC scene whether you’re just in it for fun and racing with friends or if you plan on hitting the track for some passes down the strip. It’s also a great base for drag car builds, it really has endless possibilities. They did a great job with the overall look of this truck and equipped it with some exciting features. The price tag on this beast is $500 which has some squalking. We see licensing contributing to the cost of this car, but here’s the deal, there is no rule that says companies have to sell you products cheap because it’s “just a hobby.” Traxxas is a business and they have the costs of everything they do built into the price, it is what it is and they have every right to make a profit like any other business on the planet. With that said, we’re excited to drive the car as it sits. Make sure you head to our Youtube channel and subscribe so you can see this car in action when we do: http://bit.ly/SubToRCD