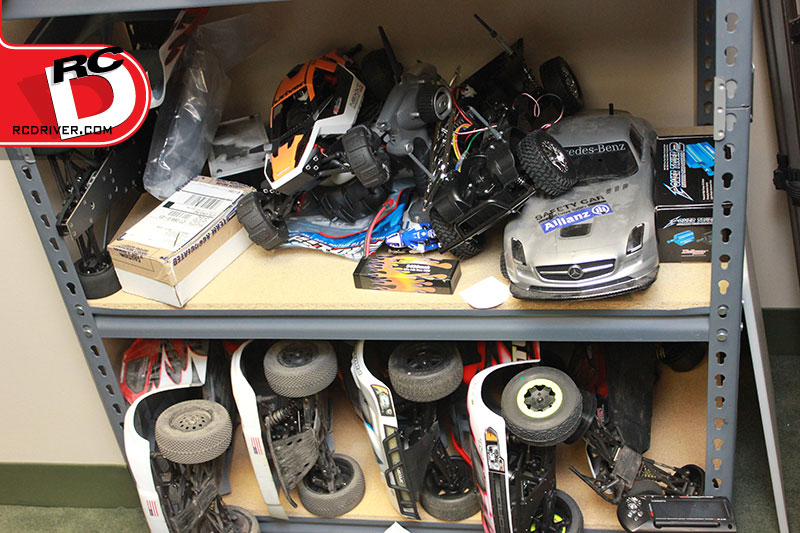 If you are anything at all like me you might be a borderline radio control hoarder. When entering my “special” room in the basement, people become overwhelmed with cars, trucks, bodies, tires, batteries, chargers, and much more! I seem to have a vehicle or two for every application and if that were not enough, I usually have enough spare parts on hand to completely rebuild each and every vehicle. Well, I realized, with the help of my wife, that I just might have a slight problem and it might be time to part with a very, very small part of my collection. If this sounds something like the situation you are in, and you’d rather sell off a few vehicles than go to a RCCHA (Radio Control Car Hoarders Anonymous) meeting, let me give you some friendly advice on parting with one, or more, of your radio control treasures.

First and foremost, don’t be sentimental. Sure, it is nice to hold on to things, but it is even better to have cash in hand! If the vehicle is not a shelf queen and is just collecting dust month after month, year after year, it needs to go!

Ok, so you have identified the vehicles you are willing to part with, now clean them! It does not matter if you are selling your vehicle online using eBay, a message board or at your local hobby shop. The first, and most important rule in selling a used vehicle is to clean it! Cleaning a vehicle before you go to sell it serves a few purposes. First, it makes the vehicle visually appealing and will cause people to take a second look. Does anyone want to take a second look at a used vehicle caked in mud?  NO!  Second, it tells the potential buyer that you took decent care of the vehicle. Third, the potential buyer knows he won’t need to do that himself.

Used is used, even if you have only run one tank of fuel, one battery pack or simply just opened the package. Pricing your used  bone stock Axial SCX10 at $290, even if you have run just one battery pack through it when a brand new one goes for $299.99, will not attract buyers. The same holds true for vehicles that are loaded with hop-ups. Sure, you loaded that “like new” SCX10 with plenty of STRC aluminum option parts and that will no doubt increase the value, but asking $450 for it won’t attract many buyers. And remember, a potential buyer does not care that you won your first big race with this vehicle or that it was your first vehicle, or that your uncle’s sister’s mother’s aunt gave it to you. Sentimental value does not translate into cash value.

No matter where you are looking to sell your vehicle, either on the internet or at the used section of a hobby shop, be specific. I was looking through the “for sale” section of a message board the other day and someone was selling a near-RTR Team Durango DEX408. They simply had a price and five pictures. Nothing else. Don’t just put a price tag on your vehicle and think it will sell itself. Let people know exactly what they are getting for their hard-earned greenbacks by making a well-detailed list of what is included. Be sure to mention things like how much fuel has been run through the engine if it is nitro and list any spare parts and option parts.

Broken vehicles seldom sell. Placing a vehicle up for sale that needs to be repaired or that needs specific key parts before you can operate it may discourage many people from taking a second look. If your Ready To Run ECX Torment needs a new brushed motor, put one in before you sell it. It will probably cost you $15 and will make it much more appealing to potential buyers. Don’t be a slimy, stereotypical used car salesman either. If you say the vehicle is “like new” and someone is checking it out and notices that there are two bent turnbuckles, a stripped spur gear and bald tires, they are going to put it down and tell other people to avoid it.

Sell at the right time of year. In some parts of the country, like the northeast where the RCD office is located, there are racing seasons. In the summer, most people are racing nitro vehicles and 1/8-scale E-buggies on large outdoor tracks. In the winter people are racing 1/10-scale off-road on indoor dirt tracks or are racing on-road on carpet tracks. That said, when unloading a vehicle, make sure it is during a period of time when people will be looking for it. Don’t put your valuable 1/8-scale TLR 8IGHT 3.0 up for sale in late October, expecting to get top dollar in a day or two. Selling a vehicle like this is ideal in the spring. Likewise, if you are selling a speedy 1/12-scale Team Associated RC12R, don’t expect it to move in May when people are thinking of dirt racing, sell it as the weather gets colder and people are thinking of indoor carpet racing.

WRAP UP
Now that you have opened the floodgates and sold one or two of the vehicles from your fleet, it will be much easier to part with others in the future. Or, if you just can’t get enough, you can use the money earned from the sale of your unwanted gear and head to your favorite hobby shop and buy new vehicles to fill the newly-created empty spots on your shelf, starting the hoarding cycle all over again!