Top of the heap touring car!

This article was originally published in RC Driver’s June 2016 issue. 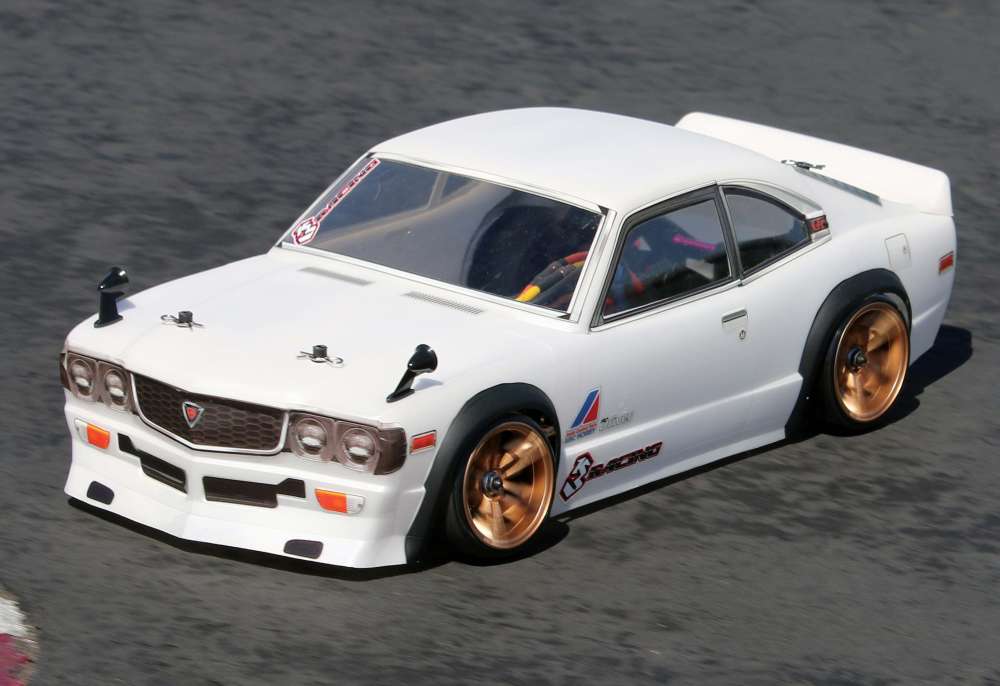 The world of RC has many different facets; there’s really something for everybody. One of the areas I’ve set my sights on mastering is the drift segment. It basically goes against everything I’ve learned when it comes to driving sliding is better than grip, more power does not mean a faster vehicle and tire compounds, well, plastic is better than rubber. So when 3Racing sent over their new Sakura D4 rides, I had to scoop one up to see what all the hoopla was with this drifter.

AT A GLANCE
WHO MAKES IT: 3Racing
WHO IT’S FOR: Any level of drift enthusiast
PART NUMBER:  KIT-D4AWD
HOW MUCH: $115.00
BUILD TYPE: Kit

REVIEWER’S OPINION
This drifter has quite a bit going for it; well manufactured, lots of pretty aluminum and rolls in at a very affordable price. Handling is good as well once you get used to the kit setup, and it accepts a very wide range of body styles. There’s also a ton of tunability for those that like to tinker, so this car should grow with you as your skills do

FEATURE BREAKDOWN
The D4’s chassis is a 3mm sheet of FRP, or Fiber-Reinforced Plastic. It has cutouts on the bottom for the front and rear diffs to peek through as well as a bazillion countersunk holes. Most of these are used for mounting things like the bulkheads, servo and battery box, but there are quite a few left empty. They can be utilized to control chassis flex, but not with the stock top deck; an optional one must be purchased. The layout is similar to a normal touring car; front bulkhead/ suspension, steering system, electronics, battery box, motor mount system and finally the rear bulkhead/ suspension. Everything is easily accessible and replaceable with just a few turns of some screws.

 Other than a few interesting pieces, a drifter’s suspension is very similar to a touring car’s. A single A and D mount and separate B and C mounts are used, both having dual support screws and stamped, metal shims to raise them up. The suspension arms have droop screws, anti-roll bar mounts and adjustable wheelbase shims. The rear suspension uses vertical ball studs to handle camber and roll while the front uses an interesting, dual pickup front Y-arm setup. This system allows the adjustment of camber, caster and roll and swings smoothly on upper and lower pivot balls. It’s actually quite unique and allows for some extreme camber settings.

 One thing that’s pretty amazing with drift cars is the serious amount of steering throw they have. Starting with the bellcranks, they’re positioned as far apart and as close to the edges of the chassis as possible. This creates a massive 65° angle, enough to control the D4 in even the deepest of slides. Since drifters spend most of their time sideways, I wanted a good servo to keep up with the constant countersteering enter Futaba’s S9551 Low-Proﬁ le Digital Servo.
While not needing anything near its 122 oz. of torque, the .11 speed is deﬁ nitely enough to keep up with any steering angle changes I need it a moment’s notice.

 The D4 uses a dual belt design, spinning a front, fluid-filled gear differential and rear spool. A huge, 92T 48P spur is attached to the central gear shaft, where the front and rear belts meet. Pulleys keep the front belt high above the chassis, and 3mm CVDs transfer the power to the wheels. Standardized 12mm hexes are included to allow the use of a variety of different wheel and tire combos.

 To give the D4 a bit of beauty, I opted for a Mazda Savanna RX-3 body from ABC Hobby. This is a beautiful replica of this car and included a slick set of decals, looking fantastic once mounted. I wasn’t sure how to paint it, but I do remember a technique I used a while back that got some attention. So, I gave the RX-3 a shot of pearl white on the underside, but painted the fenders black on the outside. After everything was dry, I shot the outside with a coat of Tamiya Flat Clear. I love the final result … and it was easy. That’s good because I’m a very impatient painter! 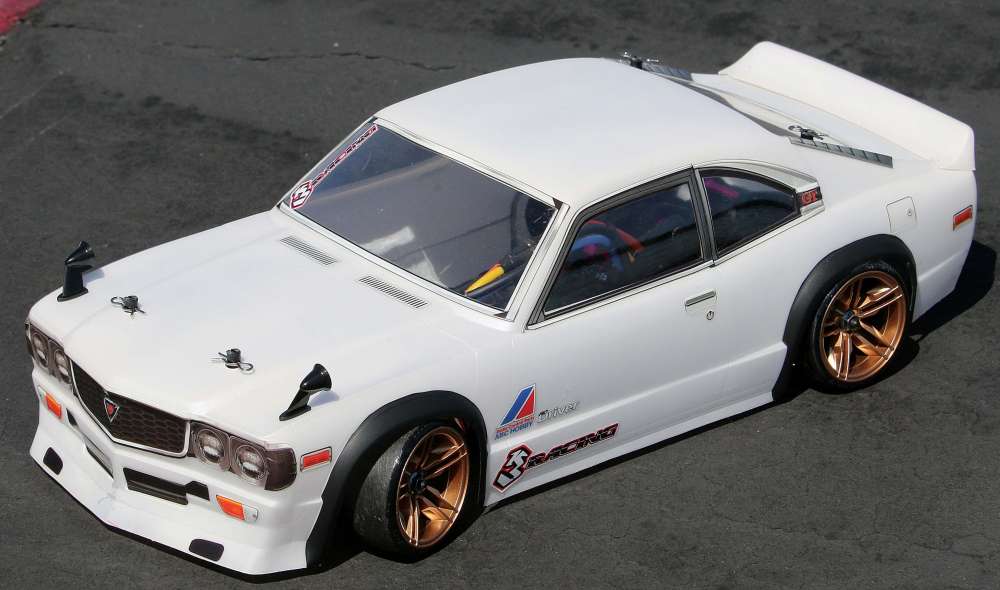 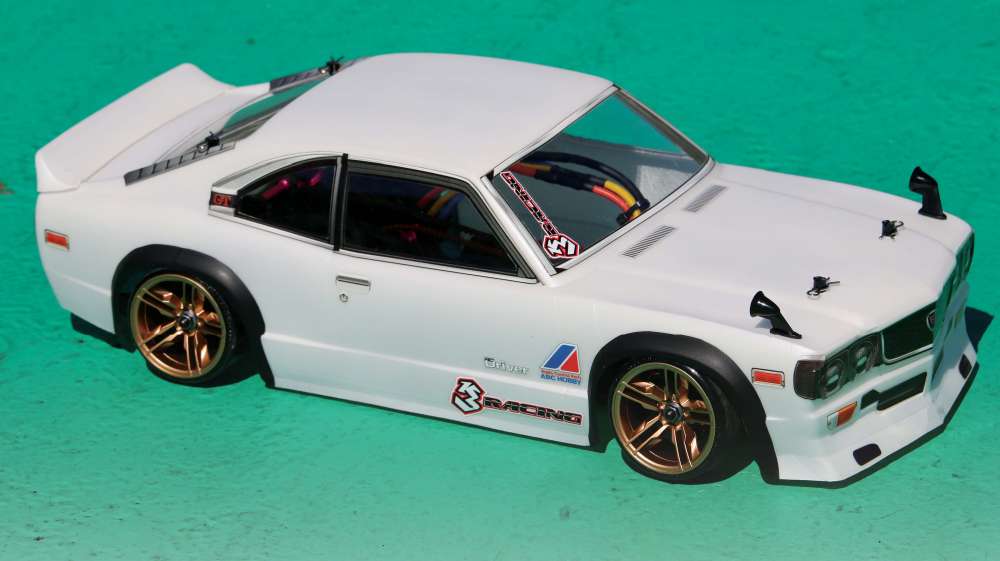 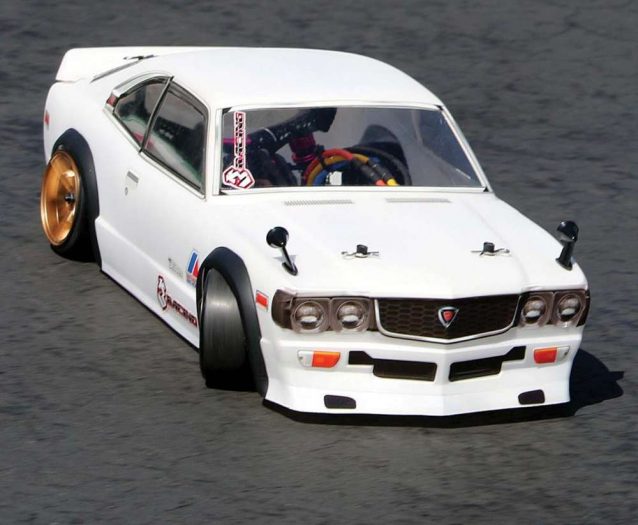 ON THE TRACK
For this test, I had the privilege of putting this four-wheel drifter down on the iconic Tamiya track in Aliso Viejo, CA. I was heading there to do a photo shoot for another vehicle and thought, heck, why not bring it along and get some sideways action?

STEERING
The steering on the D4 is quite amazing. As I mentioned earlier, the throw is a whopping 65 degrees with zero interference from any parts. Even the CVD’s can turn that far, allowing smooth input of power at full lock. While it does look a little funny with the tires turned that far (remember, I’m a touring car guy), the D4 does an amazing job of keeping the slide controlled and moving in the correct direction. This is, in part, thanks to the awesome handling of the D4, but also the speedy Futaba servo.

ACCELERATION/BRAKING
Drifting is not about overall speed but wheel speed controlled. I know that sounds odd, but once you’ve mastered the wheel speed of your drifter, you can control the angle of attack and the sideways motion through any corner. I found Novak’s Drift Spec system allowed me to do just that make controlled, smooth throttle adjustments to alter the angle of the D4 when and where I needed. Sliding in a little shallow? Add more throttle to get the tail end to whip out. Starting to over cook the corner? Ease up a bit and the D4 would get right back in line. It’s all a matter of ﬁ nesse, and the Novak system is designed for just that. I did have to be a little creative with the install of the system due to limited space on the chassis, but overall it worked out great.

HANDLING
After driving hooked up touring cars for some time, it does take a little getting used to understanding that a car losing grip and sliding is the right way around the track. It’s also good practice for managing throttle control once you get it, it’s beautiful. Taking a car and pitching it sideways through a sweeper, all the while keeping the nose pointed in at less than two or three inches from the curb … it’s actually very rewarding. It’s a controlled out of control thing, and the D4 does it wonderfully. The kit setup is good, but if you feel like you need more of something anything there’s plenty of things to adjust. I actually enjoyed the car with the kit setup and it was only a matter of a battery pack or two before I was swinging the rear around the hairpins, around the carousel and back and forth through the chicane. I never had a chance to strap the battery on the diffuser, but that’s something I’m looking forward to.

DURABILITY
There’s not much you can do to damage a drift car  they’re really not going all that fast. I did, however, have an issue with the front belt’s bearing pulley mounted to the top deck. During the initial run, it suddenly felt like the D4 acquired a little drag brake. I kept with it, trying to overcome the issue with driving, but soon had to pull it in to actually check it out. During the build, the belt slips into a plastic ‘tunnel’ that is supported by a bearing, keeping it above any chassis mounted items like the ESC or servo. The belt, though, doesn’t sit square on the bearing; it’s half on and half off. So, when the drivetrain is spooling up, the belt will sometimes slide off the bearing, ﬂopping around and catching on anything it comes in contact with. To ﬁx this, I simply installed a longer screw with a couple of 1mm shims to space the bearing out a little more. Problem solved. 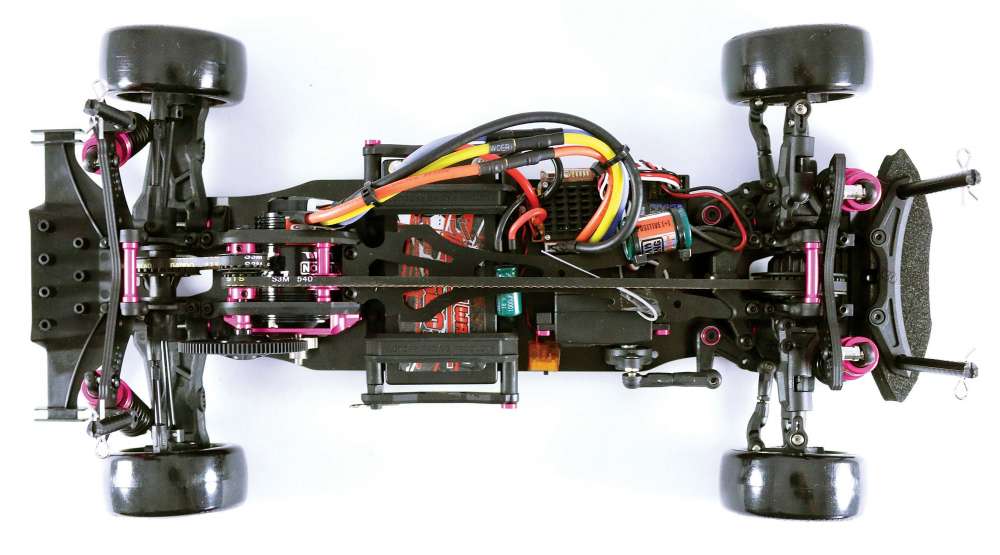 WRAP UP
This is a fun little package and a great car for the first time drift enthusiast. It’s also not a bad choice for the seasoned driver, especially with all the tuning this car has. It looks great, drives great and has a ton of aftermarket hop ups to fully customize it. It’s also available at a very affordable price. Sounds like a lot of reasons to check one out!