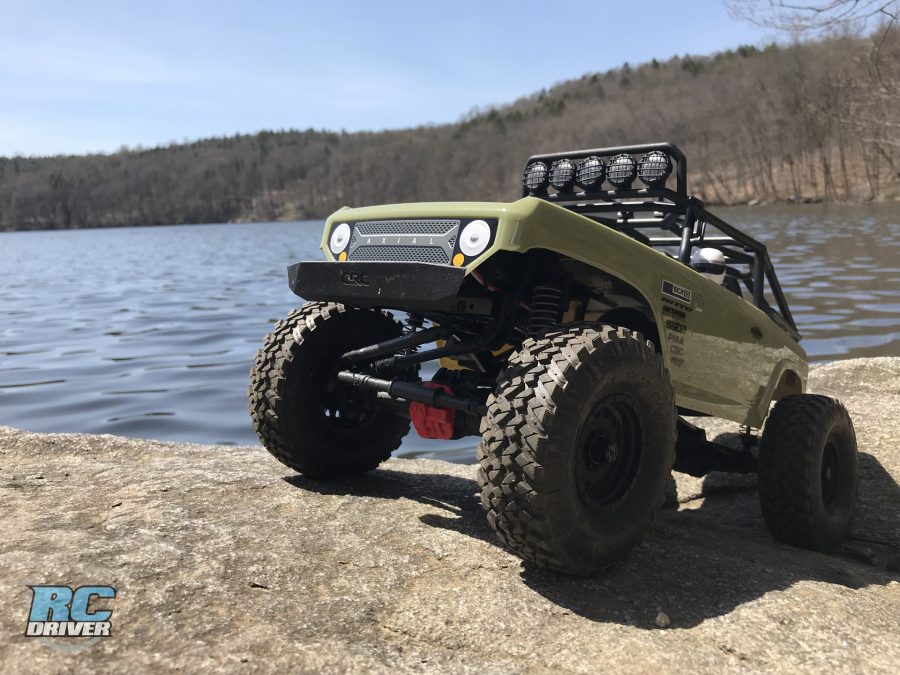 The Axial Deadbolt was the last original design SCX10 to live up into 2018 and it has been put into the legacy category now that Axial has released the SCX10 II Deadbolt. The new Deadbolt carries that same agressive looking off-road body, but now in a more muted green, but it still has the take me out for adventure look. Under the body is the SCX10 II platform that is nearly all new in comparison to the SCX10. In fact it’s the newest of the new SCX10 II designs with changes made to the axles and transmission from when the first SCX10 II’s were released. What remains the same is its true off-road performance and ability, but at a price that has many drivers making the move to get into a trail truck and making season enthusiasts think about new builds with this rig as the base. We have the SCX10 II Deadbolt in our collection now and we want to show you some of it’s key features and run you through a day of driving with this exciting rig. 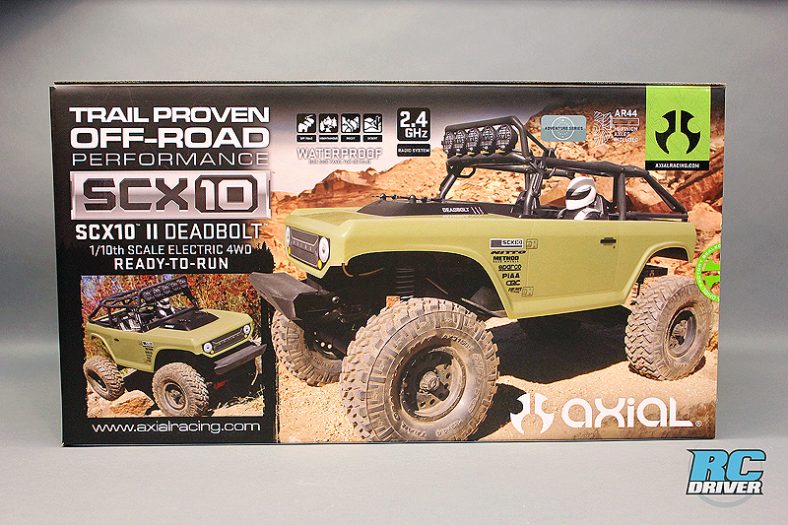 THE BOX- Axial’s signature look is wrapped around the Deadbolts box and shows just what type of terrain this machine is capable of handling. This should get you exciting about driving the rig from the moment the box touches your hands. 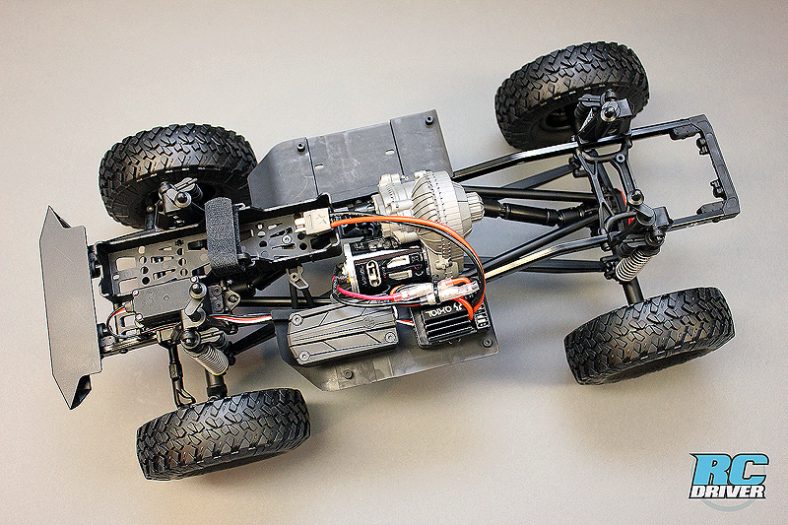 THE CHASSIS- When you pull the SCX10 II Deadbolt from the box and remove the body, this is what you’ll find. A well built and designed chassis just about ready to go. In comparison to the other available SCX10 II ready to runs, this is the most stripped down version of the bunch and that shows in the price tag as it’s the most affordable. But, just because it doesn’t have the frills like LED lights or a fancy licensed body doesn’t mean you should just pass this rig by. In fact, this is a popular platform to build your own dream scale truck with. 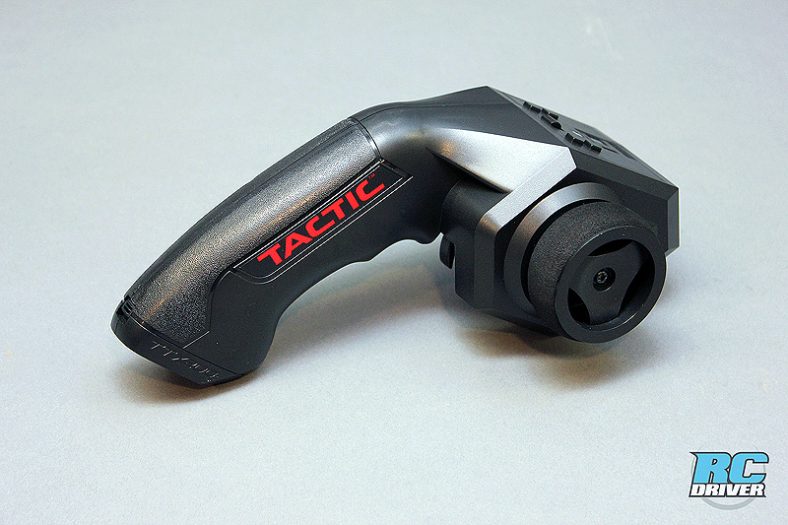 THE RADIO- As of now, the Deadbolt 2 comes with a Tactic TTX200 digital 2-channel radio system although we speculate this might change at some point since Horizon Hobby aquired Axial Racing. So that means a Spektrum transmitter may be in future production kits. Again, this is just a guess. But in any case, the TTX200 is a good basic radio. Good feel, adjustable trims and even end-points. 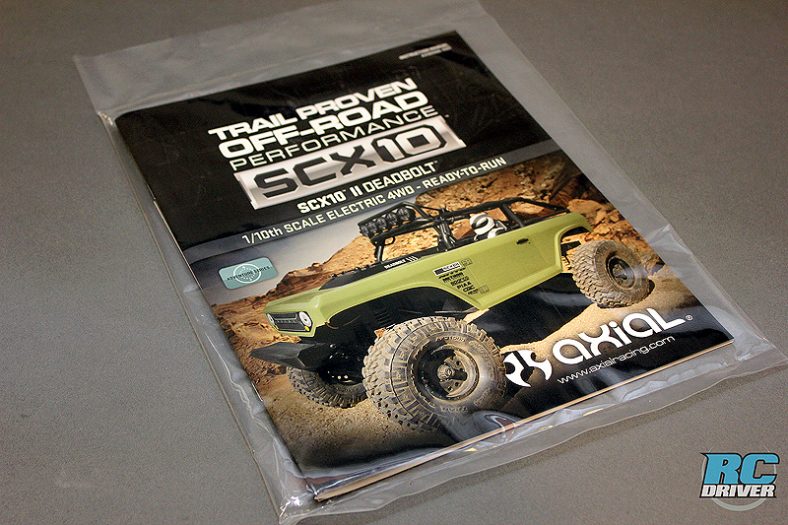 MANUAL- The standard baggy of paperwork is tucked away in the box. The key booklet in here is the manual. If you are new to RC, get to know your machine here before you operate it. 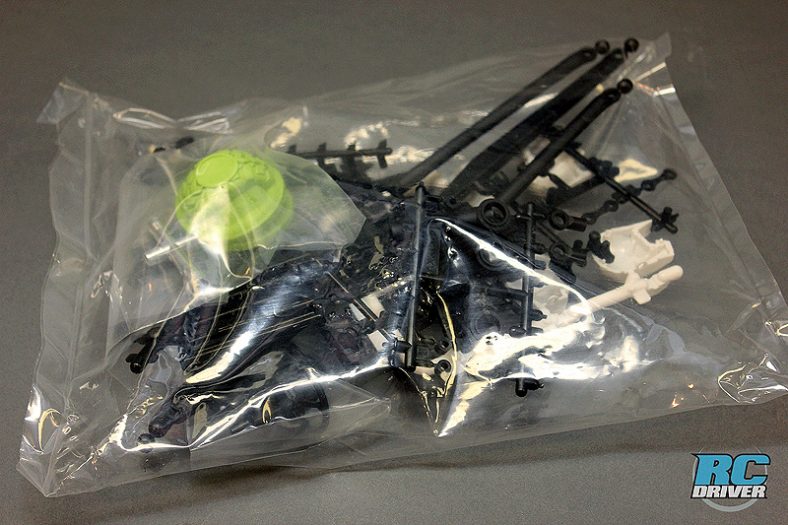 SPARES- Parts! Like every Axial kit the left over parts trees from the kits assembly are included. Some of the parts can be utalized when customizing your rig later on. Trail markers and basic tools are also included. 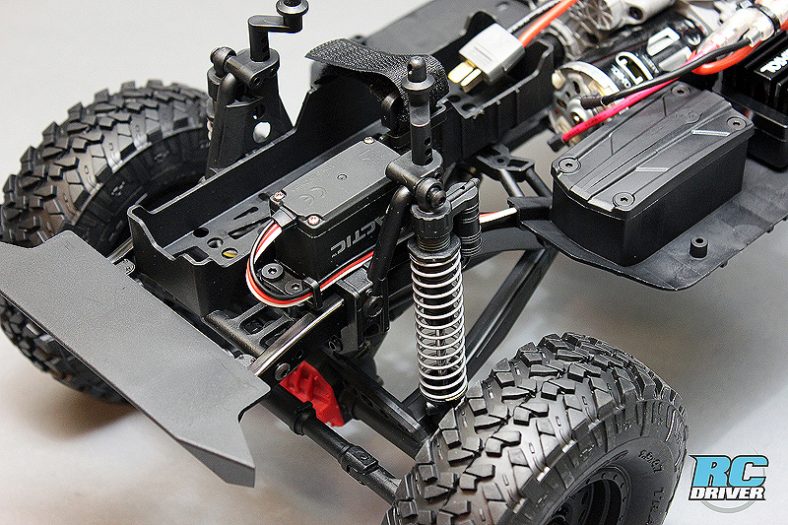 FRONT CHASSIS SECTION- Now we can get into some of the cool stuff. The kit of course comes with the chassis mounted steering servo to give the rig a more scale appearance. The shock towers have been revised since the first generation kit, however the classis Axial stamped steel frame still serves as the base on the II model. 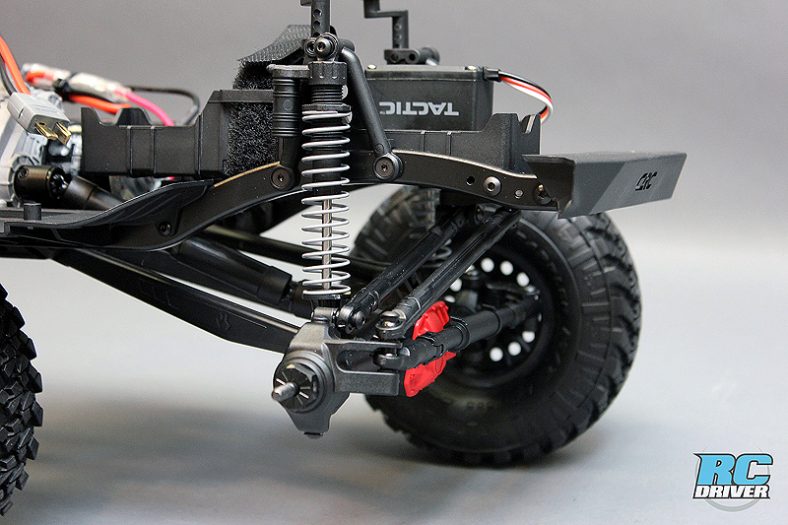 FRONT AXLE AND STEERING- Here we get a better look at the steering links on the Deadbolt which are composite plastic. You’ll also notice the pan-hard bar to prevent the axle from swaying side to side. The front of the truck has a 3-link set-up and a 4-link in the rear. The links are plastic, but they are revised from the originals, so they are a bit stronger. The new AR44 axles incorporate the C-carrier so there are less parts that make up the axle. The downside is, if you do break the C-carrier portion of the front axle you do need to buy a complete axle set. But, back on the plus side, there are bulky steering knuckles with twin steering arms to capture the drag link. The hexes are a standard 12mm too, so you can use just about any trail truck wheel on the market when you choose to start customizing. 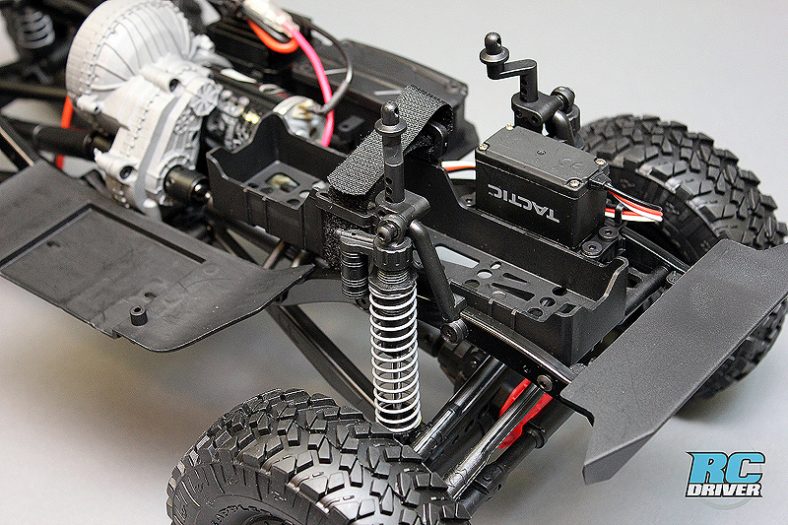 BATTERY TRAY AND SHOCKS- On the SCX10 II, the battery is located in the front to keep weight on the front wheels to help you traverse inclines. The SCX II has new front shock hoops and Axial has installed off-set body posts to secure the Deadbolt body in the original location used on the SCX10. On each corner are Axial’s composite threaded body oil filled coil over shocks. There are firmer springs on the front of the rig than in the rear. 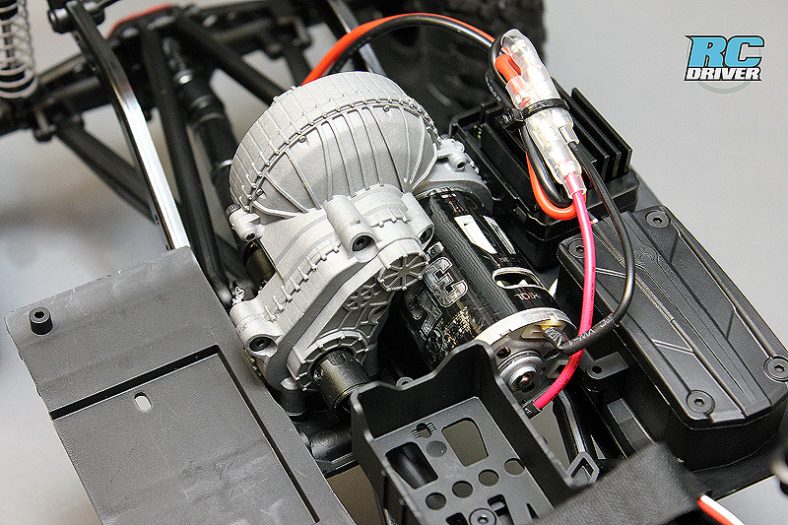 TRANSMISSION- At the heart of the truck is the new LCX transmission case that mimics the look of a real transmission. The layout of the transmission however is the same three gear internal set-up that we’ve seen before and only the top shaft gear is metal. The idler and main gear are plastic. Good news is, an upgrade to metal is only $7 and a little bench time away. Bolted to the tranny is an Axial brushed 35T motor and it has plenty of torque. The spur gear does sit between slipper pads so the transmission is protected from shock. 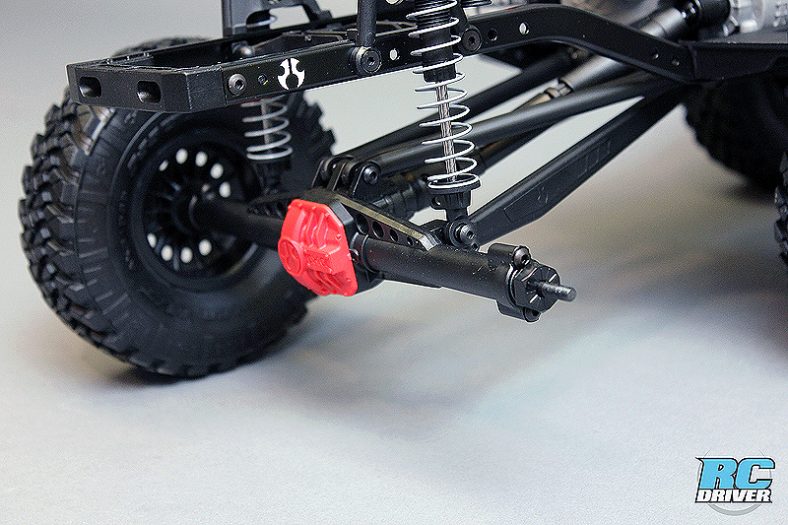 REAR END- The rear axle housing is unique and no longer a similar axle to the front with endcaps like the original SCX10. The axle has a small gearcase housing with raised pinion to help it clear terrain. The ends are simple fitted with screws to hold the axle support bearings in place. We love the look of the truss on the top that adds additional support to the axle and link mounts. 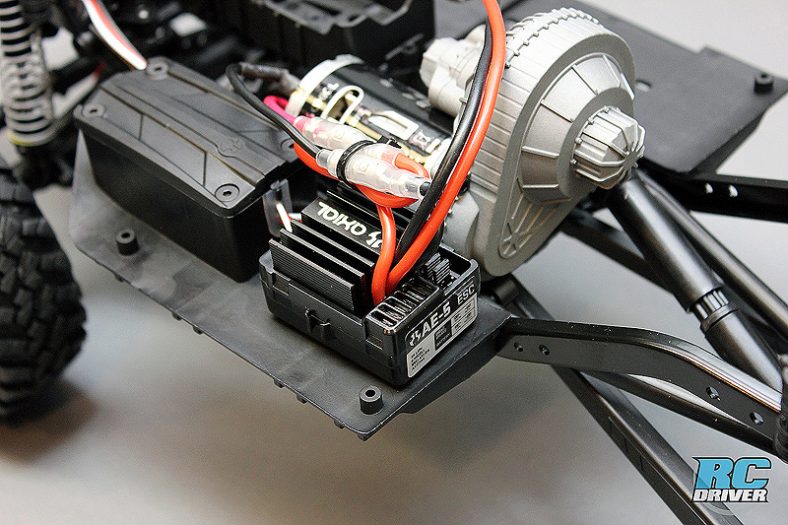 SPEED CONTROL- Axials AE-5 brushed motor ESC is secured to the left floor pan right behind the sealed radio box. This ESC is a great RTR ESC that offers excellent drag brake, the option to use NiMH or LiPo batteries and its fitted with a high current connector. The downside for us here is this is not the AE-5L speed control that has the pigtails to connect LED lights. That would have been a nice option to include here. 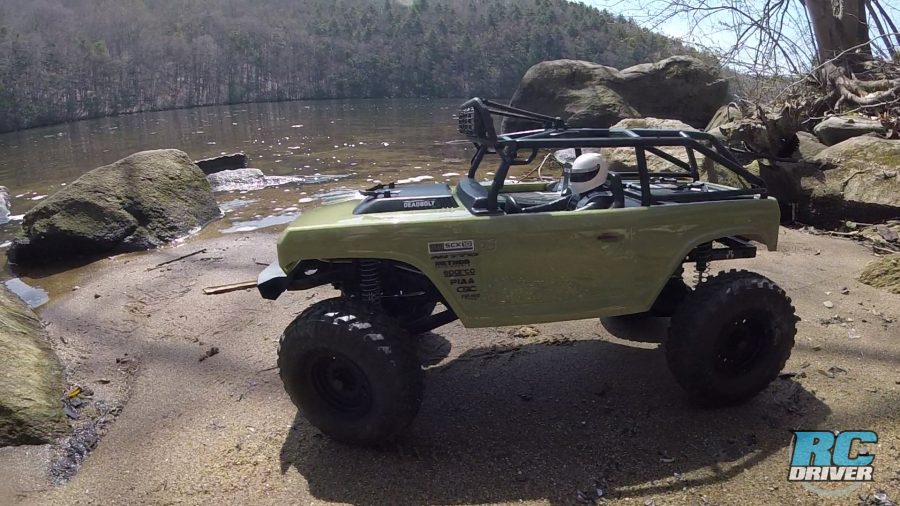 Getting the Axial SCX10 II Deadbolt from the box and into driving mode is very simple. You’ll need to supply and install four AA batteries in the radio and charge the 7.2v NiMh or 7.4v LiPo of your choice and install it in the rig. Turn the radio on, plug in the battery and you’re off. Axial makes it so simple to get going with success, just about anyone can get right into the hobby and on the nature trails. For testing we headed to the nearest town park which consists of beautiful walking trails next to a lake. 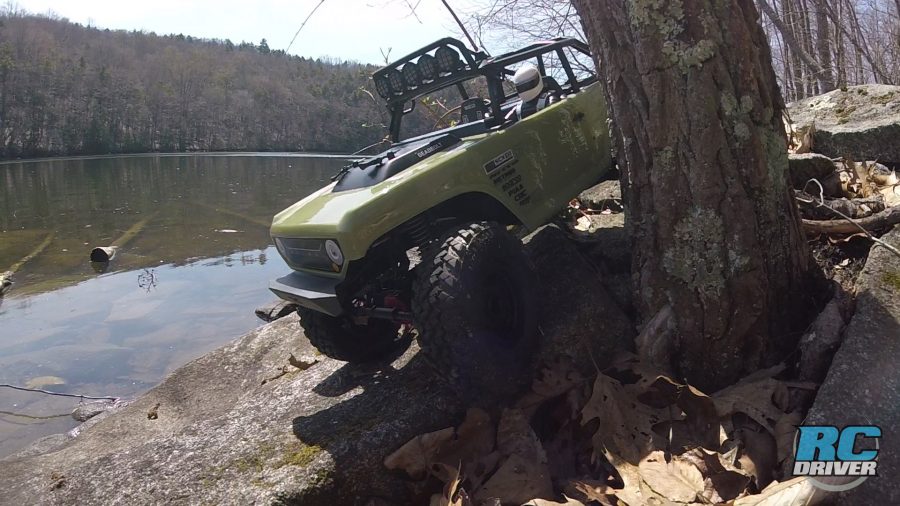 STEERING- The Deadbolts steering works well as the stock servo has plenty of torque for your average trail running. In comparison to some other SCX10 II Models, the Deadbolts steering assembly is limited due to it’s specific cost saving design, but for general trail running, you won’t notice the few degrees of loss in throw. If you really needed the few degrees, you could always upgrade a just few parts to do it. But back to what’s included the trucks steering didn’t hold us back from the courses we navigated through, in some tough rock sections, we did max out the servos torque and it couldn’t crank the wheels when in some rock gaps, but we were pushing things to the limits. This is Axial’s lowest price vehicle and the stock steering assembly gets the job done. 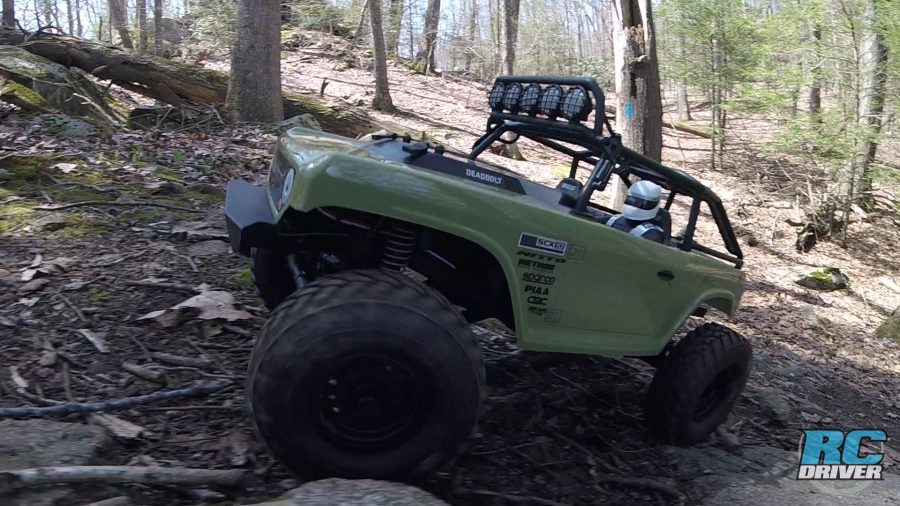 POWER AND BRAKING- The Axial 35T brushed motor is a brute. It puts out plenty of torque to handle standard off-road trail driving. It can also handle some wet and wild runs, we know, we ran the Deadbolt through the water in a small beach area and the truck didn’t change its pace. The speed of the rig is slightly faster than a walking pace, but what we really like about the truck is its drag brake for nice slow decents. There were several spots that the smooth drag brake came in handy when challenging the truck on the rough terrain. 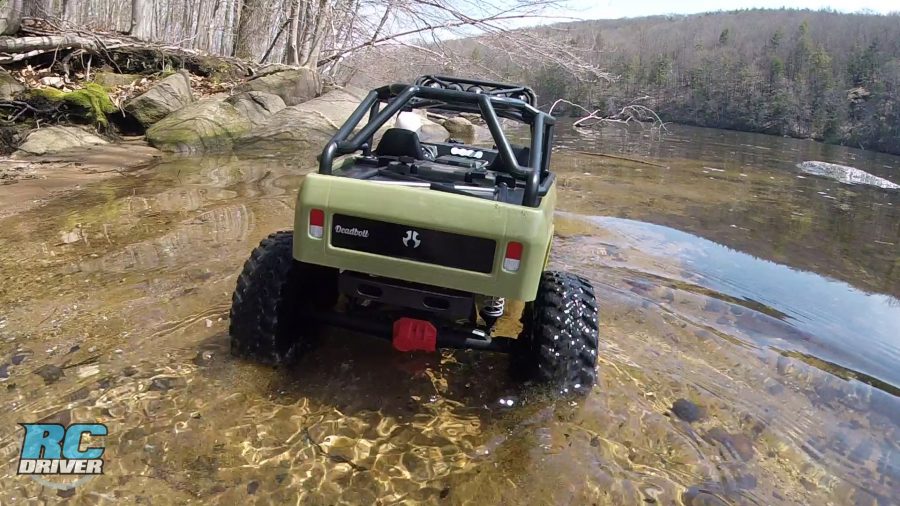 HANDLING- The suspension on the SCX10 II works well to a certain extent. It tackles your basic dirt trails with easy, driving over tree roots and small rocks without issue. Nothing really disrupts the truck on a basic walking trail. But once you start really challenging the truck, hitting some tough rock faces, you can see the suspension is rather stiff. The suspension has some firmer springs in the front than in the rear and in some instances, the truck rolled rather than the suspension continuing to articulate and keep the chassis level. So some tumbles were pretty nasty. There are some simple, low to no cost mods that some drivers do to the suspension to improve its ability and we’re going to do that to get more out of this rig. Those mods can be found in Axials Blog. Again for general trail use, the suspension is just fine and the links appear to be much more resistant to bending than the original SCX10. 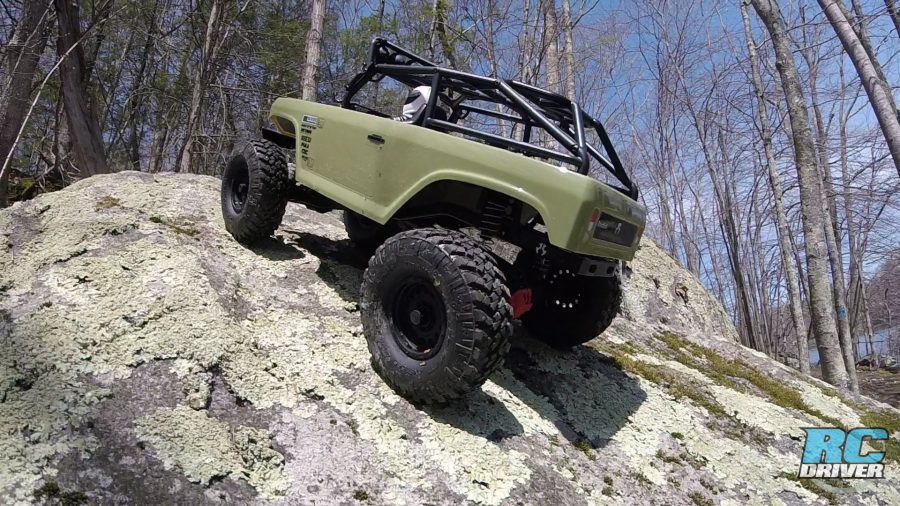 DURABILITY- Over the years of driving Axial SCX10’s we can probably fit just the few parts we broke in just one hand. This truck is tough, it can take some hard hits and tumbles. Our rig had no issues other than the driveline being a bit noisy at first, but once it broke in it was fine. There’s no issues with those plastic transmission gears yet either, but for the low cost of a metal gear upgrade, we’ll probably add those to the truck before a problem does arise. 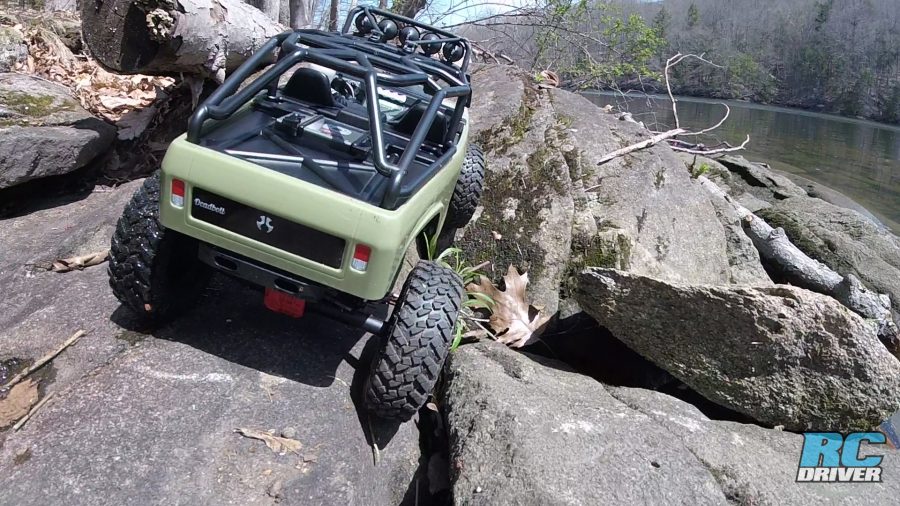 The Axial SCX10 Deadbolt was a favorite in the RC trail truck community and we have a suspicion that the SCX10 II Deadbolt will continue that trend. This rig has a great look to it, even with the new muted green paint. The cage looks cool, simple driver and cabin look great and the lightbar makes adding LED’s to the truck later easier. Under the body, the SCX10 II chassis is capable of every day off-roading and it’s performance design allows it tackle a lot of challenging terrain. It’s of course a great platform too, to use as a base to build your own custom rig. The truck is priced just right to help get new drivers into the world of scale and trail off-road with success. Axial continues to offer great options for the emerging and seasoned scale trail enthusiast!

Share
Previous Cross-RC vehicles now available at HRP
Next Another Level of Awesome! The 8IGHT-X Nitro Buggy from TLR