Victor Ma, an expert in automobiles, especially in the KDF car series, is also a model Enthusiast and collector who shared his advice in the early development of the FMS Type82 Kubelwagen, making the model perform better and stand out in terms of the shape and mechanical structure layout. He felt delighted to receive the model and could not wait to share his thoughts with all RC fans. Below is the whole comment article.

The Second World War was a disaster in the history of mankind. The maniacs who started the war were no doubt ugly, shameful, and unforgivable. The German industry, which was trying to win the war, spared no expense to produce the world’s leading off-road vehicles, innovative in design, light and agile, fuel-efficient and reliable. We can’t deny that the war pushed the automobile industry to the highest quality without intention, and these advanced military automobiles were applied to civilian use after the war, affecting the world for more than 70 years. The car enthusiasts would feel lucky to see a KDF VW at the Volkswagen Museum of Europe, the Porsche Museum, or the Porsche Home Museum as there is only a few KDF VW left especially Type87, the design of which far exceeded anything manufactured in America, England and Japan at that time. In 1940, the American Willys had not yet been produced, and England even failed to create its own 4WD vehicle until just after WW2. Whilst Japan had its own small four-wheel drive in 1935, it was completely unreliable, especially its off-road performance. In stark contrast to the other three countries is German VW’s 82/87/82e and 166, whose off-road performance and design was decades more advanced than the cars of the same era- each one was equipped with four-wheel independent suspension, opening side doors, reduction gearbox for each wheel, anti-slip differential, horizontally opposed air-cooled engine with four-speed transmission, with some even having a built-in four-wheel drive low range gearbox! The type 166 is even a dual-use vehicle for both water and land use. Today let’s explore the high-tech secret of the Type 82 Kubelwagen eighty years ago with this perfect 1/12 replica from FMS Model.

As a Chinese car collector, I feel so delighted to see that China is now capable of producing such high-quality RC model like the 1/12 KDF VW 82/97 Kubelwagen as it’s known that the top of the RC models industry, especially realistic RC model area, has long been dominated by Germany and Japan. I did offer some advice in the early process but I have to say the prototype of this model surprised me more than I thought it would do, and I have had many great experiences with realistic RC models over the years. Back in 1980 when I was a fourth-grade primary student, I started changing static models into remote control vehicles. In first grade of middle school I managed to change the Hirobo 44B to 4WD by adding a motor and drive system. In grade two the same again but with the Audi Quattro, and I rebuilt a Tamiya Hilux to six-wheel drive. In the 1970s, the RC model market was not mature enough to do this as model car transmission system are more complex than the aviation or marine models, not to mention the real RC model car. At that time though, whilst not being that authentic, the Japanese Tamiya brand Tamiya was easily one of the best, but if I was using them for competition I still picked the Japanese Kyosho or the United States Associated RC10, etc.

The past forty years has not seen much progress of the Japanese model industry while on the contrary, many young toy designers in mainland China and the second generation of young bosses there worked together to bring us lots of excellent remote control models. Over the past few years, they even managed to build new type models which combines high authenticity, machine and remote control system and no doubt rocked the whole RC car market. When you first see this VW 82/97, you can’t believe you can take it out for off-road! The model featured with four-wheel drive system designed by Dr. Ferdinand Porsche in 1941, four-wheel independent suspension and horizontally opposed rear engine. It also has a built-in motor and the external belt to drive the generator and the cooling fan. Two-speed transmission and RWD &4WD are available too ready to meet the demand of different road terrain. The models tail wheel is equipped with a wheel-side reduction gearbox, along with the front and rear differential systems and special snow oil, all making non-slip performance excel just like the ZF limited-slip differential.

This 1/12 Kubelwagen features much more complex structure than 1/12 Willy’s MB and at the price of $299 it is great value! Trust me. I can say this model is the best ever of KDF VW82/87 in the world. Let’s look at its metal gearbox and drive system equipped with metal bearings. The lights on the model can be remotely switched on and off, not to mention the realistic anti-aircraft lights, headlights, low light adjustment, the stop/tail lights and commanders’ lights. Inside the car you can also find a realistic interior, with the steering wheel turning with the tie rods. With that being said, many experienced RC model fans may wonder where’s the battery? You may find it hard to believe that the batteries are properly placed in the front 40-litre oil tank, which would definitely please Dr. Porsche if he was still alive. Due to insufficient materials, Dr. Porsche had to adopt RWD design instead of 4WD for VW 82 but still managed to produce ten 87/877 four-wheel drive prototypes. As early as 1939, Porsche’s R&D team developed the world’s first high-performance, ultra-advanced and four-wheel drive Type 86 which was very much based on the Type 62. It wasn’t until 1941 that America had its own Willy’s MB which was designed based on the shrink truck. As for the British, they didn’t have their own 4WD vehicle. In 1946, the British and French armies wanted to use the Type 877 as their own army commander’s car. They managed to make two 877 4WD Beetles to test from parts left over from the production line at the Volkswagen factory that had been bombed by the Allies. Both British and French armies were satisfied with the samples and planned to have mass production. Unfortunately, the factory supplying the four-wheel drive parts was located in the Red Army-controlled area east of Berlin, so the project was canceled temporarily and instead 1,800 Type 51 were produced for the British, American and French allied officers. I’m sure you can now see how advanced the Porsche research center was. There are only five 87/877 left today and we’re so lucky today because we can get its realistic RC model with only $299. I’m confident that products made-in-China will sooner or later be the best in the world with such quality. 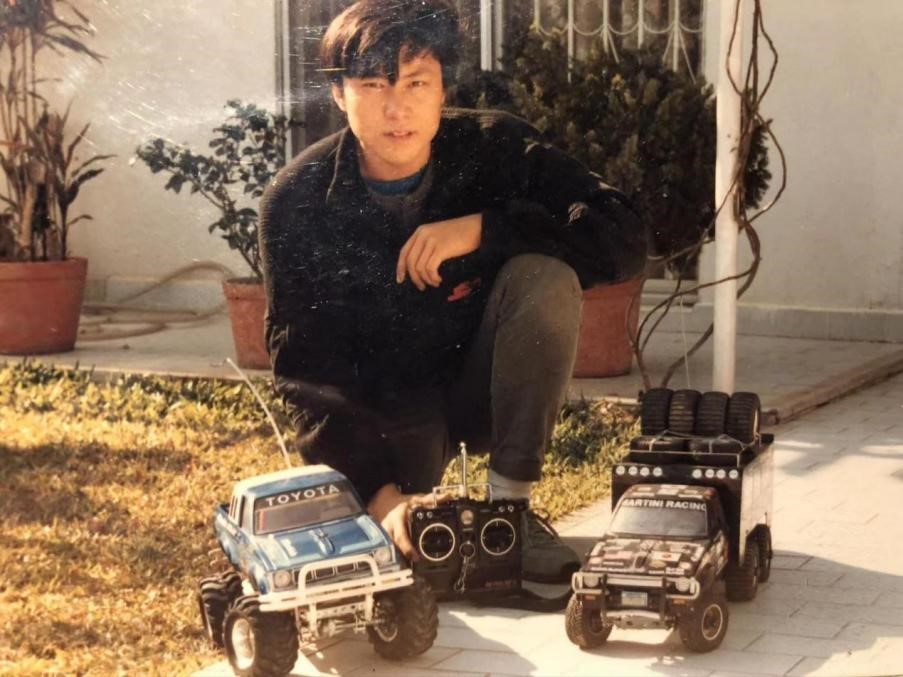 Below is a set of pictures taken by Victor Ma of the FMS model car and the actual car. 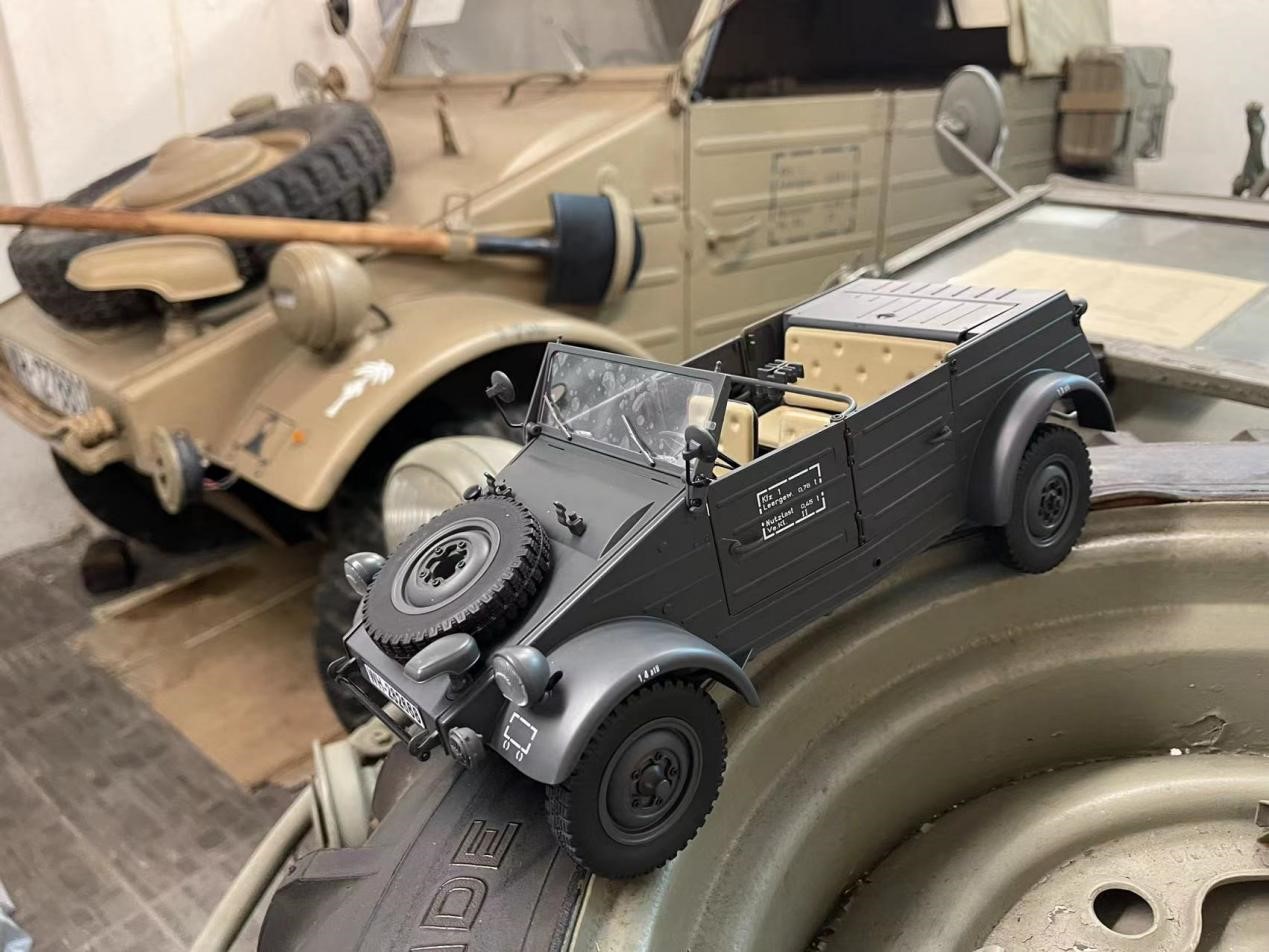 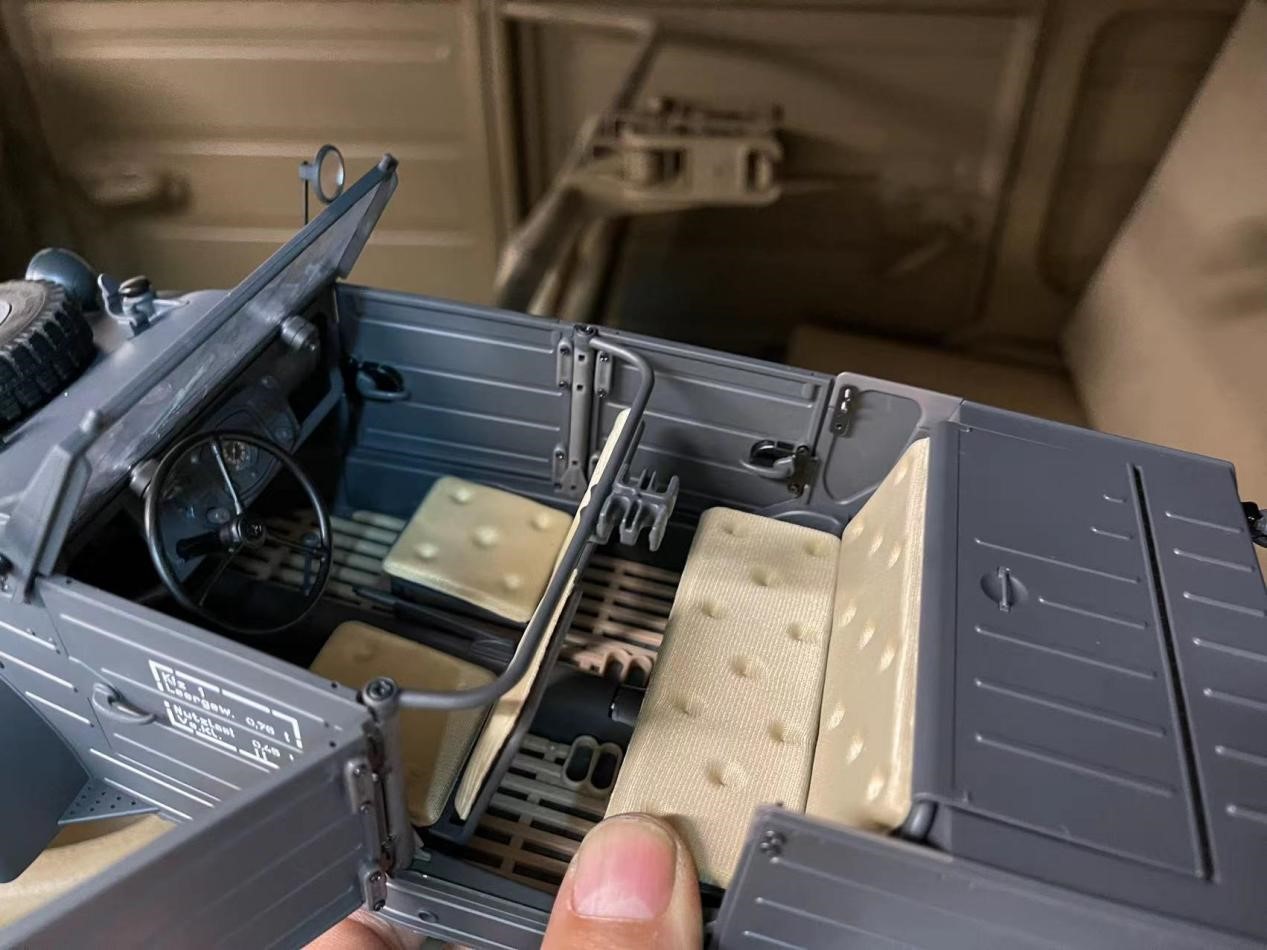 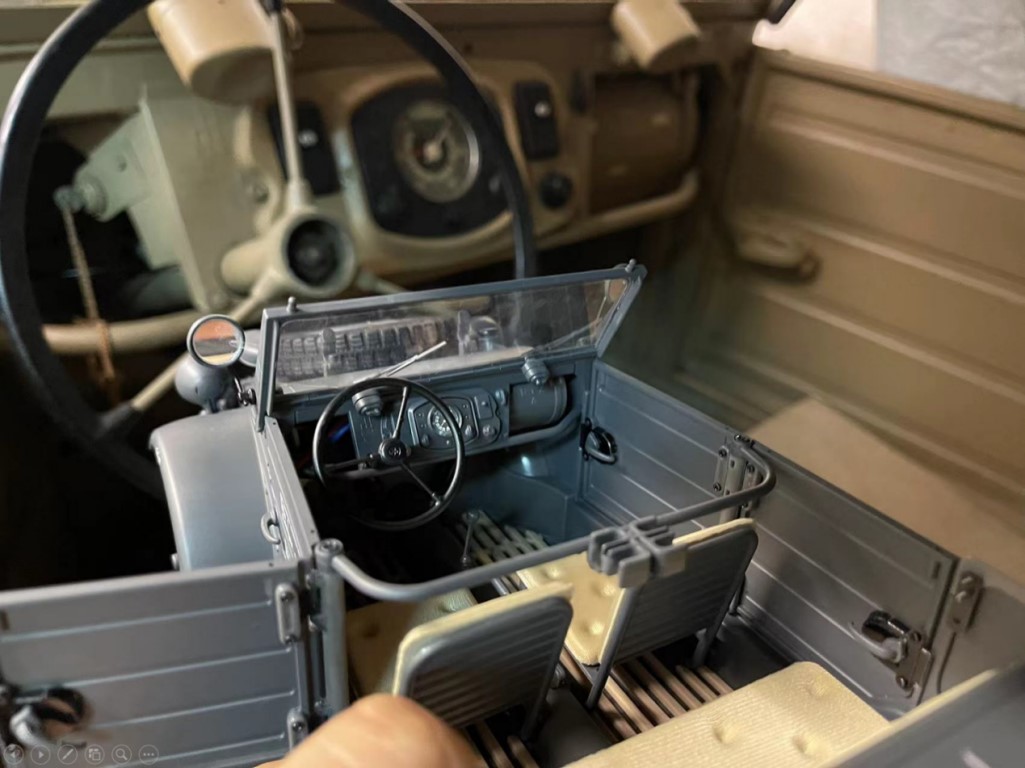 This little model car is just as much at home as either a display model on your desk, or taken out in the garden for some backyard crawling! With this model, you can feel a sense of the ingenuity held by the early automotive engineering pioneers, and how their far-reaching influence drives today’s automotive technology-Isn’t that the purpose of a model like this, and that is exactly what the FMS 1/12 Type82 Kubelwagen does. 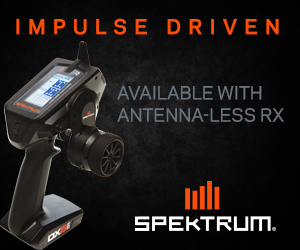