In the past, The Vogel (as he likes to be called) did a review on Hitec’s X1 Pro Multi-Charger and 17A ePower Box. This system is great; simply install the pair of bullet plugs into the top of the ePower Box and mate them to the input holes on the bottom of the Hitec X1 Pro

. This creates a nice, compact combo that sports a very tiny footprint, perfect for times where pit space is limited or for those that want to keep their space extremely tidy. I loved the small size of this setup (I’m used to using Hitec’s X4 AC Plus) but my only concern is that you can only charge one battery at a time. I sometimes get bored running just one car, so having multiple batteries charging at one time is a must for me. 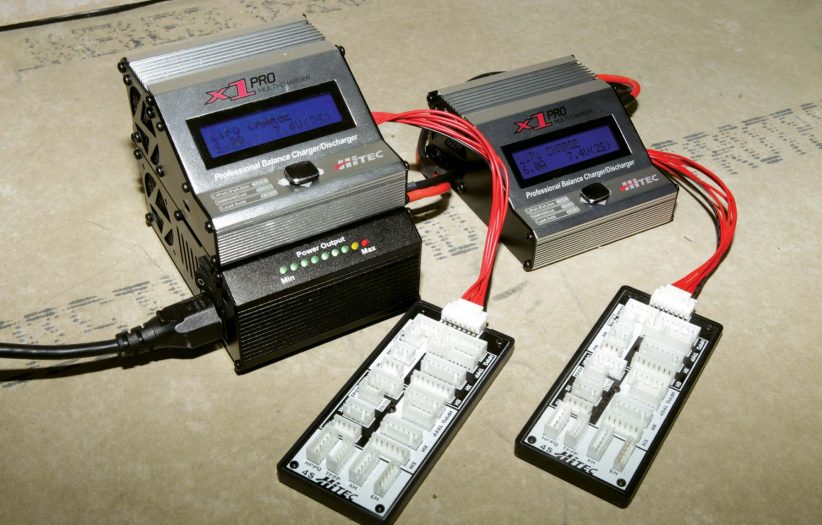 I scanned the ePower Box for a solution and noticed a second DC Output on the side of the unit that used a XT60 plug and was rated at 13.8V. My second X1 Pro had a DC Input on the side that utilized a XT60 plug and was rated at 11-18V. Oddly enough, the charger system comes with a long lead in the box that has a XT60 plug on one end and bullet plugs on the other. Theoretically, if I replace the bullet plugs with another XT60 we should be able to connect the second X1 to the power supply.

After swapping out the bullets for the XT60, I plugged everything in and turned on the ePower Box. Hooray; both X1 Pros had power. I did a couple of test charges and the system worked flawlessly. The only drawback is that since you’re now using two chargers off of the one power supply, the maximum amps you can charge at will be split between the two chargers. I’m ok with that since I rarely charge my packs past the 7A range. It’s been a couple months now and this system is still working great. The best part is that it is out of way, tucked into one corner of my pit. You’ve got to love a clean pit space!