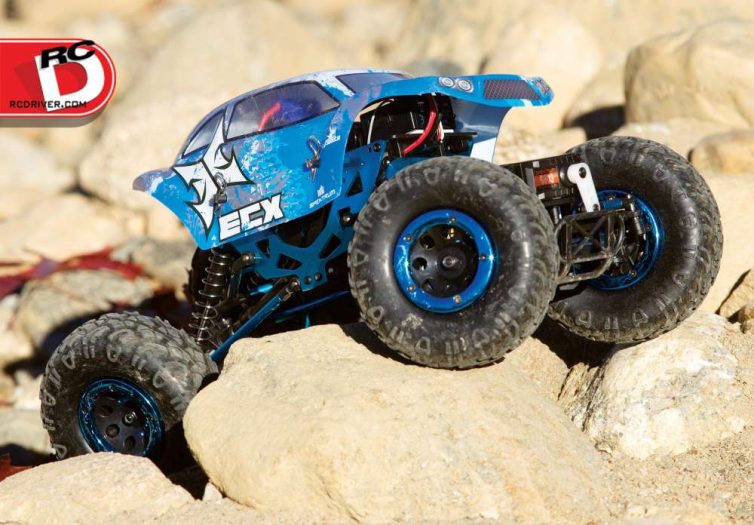 ECX is a brand that is known for beginner friendly vehicles that make it easy for the newcomer to jump into the hobby. Rock crawlers are actually a great way to get acquainted with driving an RC, because they will drive over anything and since they are geared for torque they are not too fast. So it is nearly impossible to get into trouble driving them. Mini crawlers are particularly well suited for starting out because they can be run almost anywhere. Mini crawlers aren’t just fun for the first-timer, though. Advanced RC enthusiasts might want to consider one to run around the house when the weather is bad and you can’t run your big cars. Hardcore DIY project guys might also look at these cars for potential parts for competition crawlers, and the narrow width of the axles also makes them useful for super-scalers, where you want the wheels tucked in the body. So while the ECX Temper is a mini crawler aimed straight at the first time driver, I will also be looking at its potential for the more advanced builders too. So, let’s see what it can do!

AT A GLANCE
WHO MAKES IT: Horizon Hobby/ECX
WHO IT’S FOR:  Beginner to Intermediate
PART NUMBER: ECX01003
HOW MUCH:  $129
BUILD TYPE:  RTR

REVIEWER’S OPINION
I think this is a great rig for the first timer, the go-fast guy that wants to try other aspects of RC, or to mess with around the house. I feel the suspension could use some work out of the box but I would say the same of any RTR crawler. I was disappointed in the the steering radius, since a mini will typically run in smaller areas. However it does have some quality parts, and I just see the potential of what it could be with a little work.

ITEMS NEEDED
•  Nothing, everything included!

HOP-UPS WE RECOMMEND
• Parkzone 7.4V 800mAh Lipo battery, put a servo tray on the rear axle, and mount this battery to the tray with Velcro. This will make a drastic improvement in keeping the center of gravity low.
• Dynamite Prophet 80W Charger, DYNC2015, $69.99 If you don’t already have a LiPo charger, this is a good starter unit that will come in handy as you advance through the hobby.
• Spektrum High Torque Metal Gear Servo, SPMSS6020, $39.99 When it comes to rock crawlers, more torque is always better. 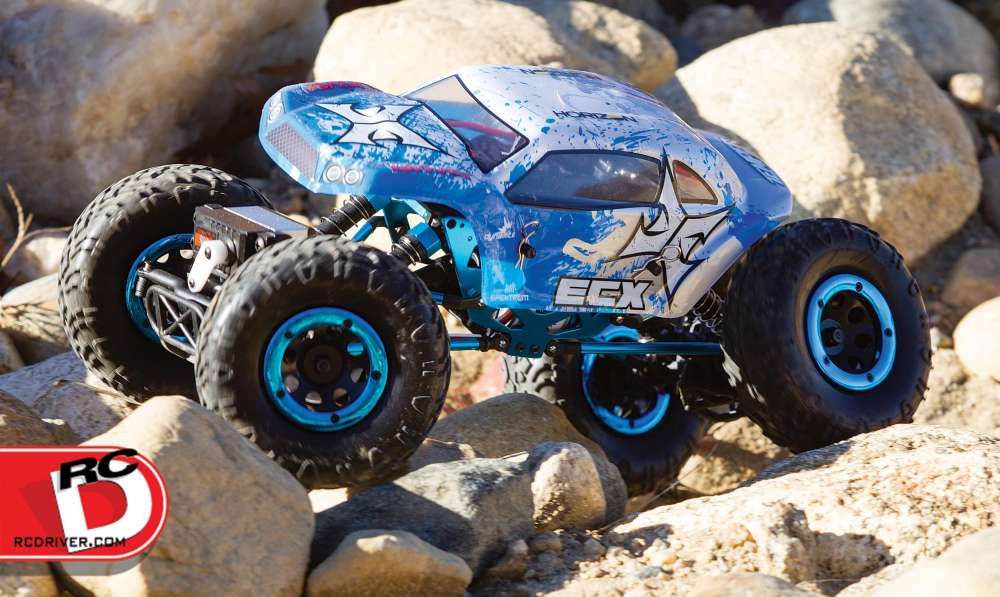 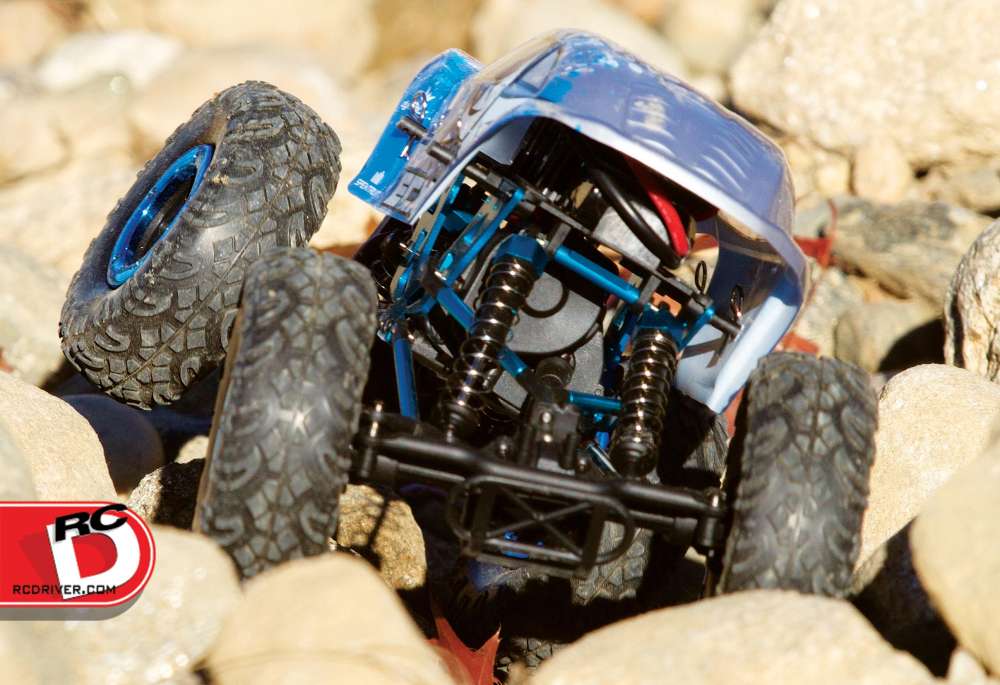 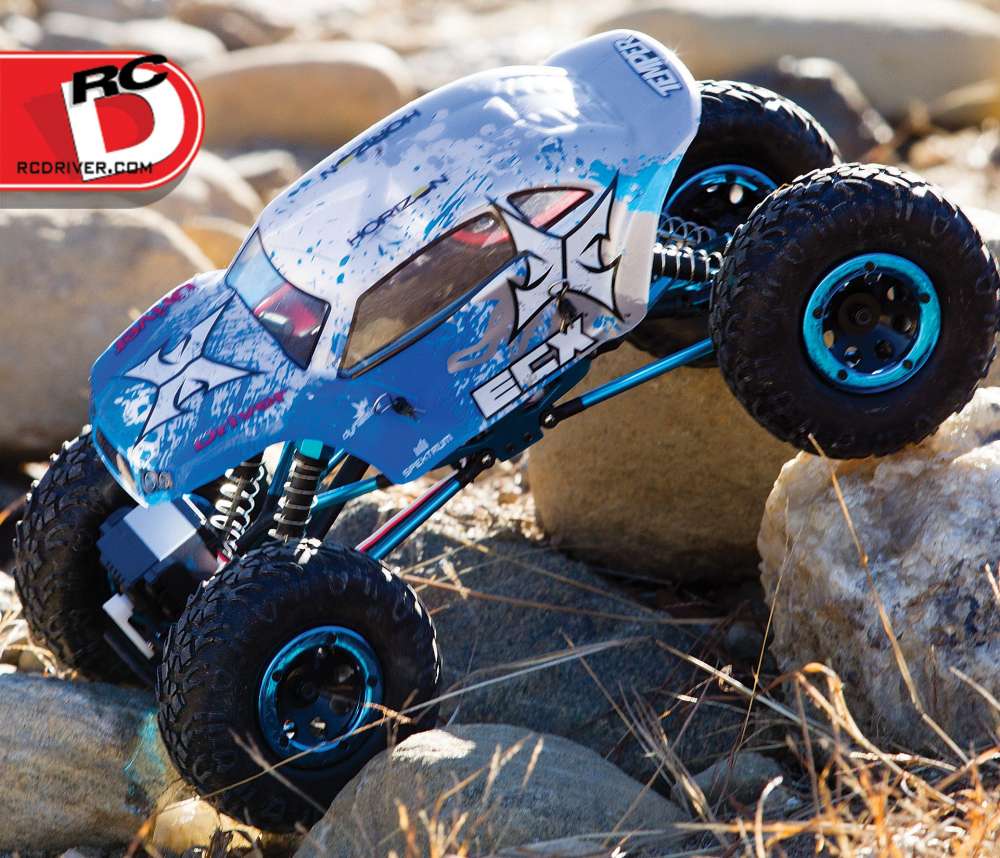 FEATURE BREAKDOWN
In this hobby people always want to know, “What’s it based off of?”, since many companies base their vehicles off others in their lineup, and people want to know parts compatibility for potential upgrades. I’ll tell you this RC is not based off any crawlers in Horizon Hobbies line up, so parts like the transmission and axles are unique to the Temper but since it uses standard sized ball studs, parts like shocks and linkages are transferable and since it uses 12mm hexes, wheels are a standard fit.

The chassis is standard for a comp crawlers using twin vertical plates made of shiny anodized aluminum. Between the plates is sandwiched a skid plate, to which the the transmission is mounted to keep the motor’s weight at the lowest point in the chassis. An upper plate holds the battery and ESC in place. I’m not a huge fan of the battery placement, but this is a typical RTR setup. Using smaller LiPo batteries will open up your battery mounting options.
The stout 4WD drivetrain is a standout feature of this RC crawler. I have heard of people using the three gear transmission and modified versions of the axles in their mini class comp crawlers. So you know it is more than stout enough to handle the power from the stock system. Steel universals connect the composite sliders from the transmission to the axles, and the diffs are locked at either end, to effectively put power to all four wheels at all times.

The shocks on the Temper actually feel very good for mini shocks. They have just a little bit of pack to them. The blue aluminum links look really nice. I almost want to steal them for my other mini crawler! The setup of the suspension is where I feel it could use some work. The shocks and springs are a little long allowing it to over articulate. There is such a thing as too much articulation. The lower links come straight out to the axles. I feel they should be moved inwards for better triangulation, which will help with torque twist and allow for more steering because the tires are about to hit the links as is.

The Temper uses a 1/10-scale size servo, so even though the Spektrum servo is a basic plastic gear unit, it is the larger size so it has much more torque than a mini servo, and the size also opens up numerous options. The receiver and ESC are combined together in an all-in-one unit, and while it is a very compact unit that saves space and weight and does its job well, it is unfortunate that if I want to change receivers to bind to my radio, I also have to add an ESC. The included radio is your basic RTR type, but it has a nice feel, and I really like the stubby antenna, also that the steering and throttle trim knobs are easily accessible.

The body is a cool, interesting design. Many started preferring bug bodies for their rock crawlers as they would help roll the car back on it wheels. This body has the look of a truck in the front, but is rounded like a bug in the rear, giving it good looks and practical function. The tires, at first glance, look like unbranded Rock Claws, but I quickly realized they are not. The tread is much more shallow and they are made of a fairly hard compound, which makes them better suited for use around the house, but they did surprisingly well on the rocks. The wheels are true beadlocks, which makes it easy to add or remove weight for tuning. The wheels are 1.7 inches, which is an oddball size, but it shouldn’t be much of a problem stretching 1.55 inch tires over them which opens up the options to a large range of scale tires, and a couple of comp tire options.

ON THE TRACK
After topping off the battery with the included charger, I was anxious to give it go. I plugged in the battery, turned on the radio, and I was ready to drive just that quick. I sat it on the couch next me and started to climb the throw pillow. At first it flipped backwards a couple of times, rolling right back on its wheels. What I’ve learned with rock crawlers is not to give up, there might just be a way to get up. And when you’re landing on pillows, you’re not going to hurt anything, so I kept on trying. I came in at an angle and steered into the the pillow, then around the outside edge to get the Temper up on the arm of the couch. Well that was a fun challenge, but I knew there was no way I was going to climb up the back of the couch, so I decided to take it out to my little rock pile outback. This pile was set up to test and tune my larger rock crawlers, so getting the mini up on the rocks proved to be a challenge. Again I kept at it, found the right angle, and I got it up the rocks. The tires did better on the rocks than I expected them to. Once up on the rocks, I was surprised how well it handled the extreme terrain. This was mostly due to its extreme articulation. I did get stuck in a hole where I realized the limitation of the mini motor and stock servo. It was locked up and I felt I should have been able to pop the rig out of that hole. I decided to test its vertical climbing ability. I had a piece of wood propped up against the porch. I gradually increased the angle to find where the Temper would tip back. At about 45 degrees, the right front tire was lifting and it was right on the verge of its tipping point. I felt a crawler should do better than that, so rather than continuing testing, I will offer my setup advice. Rotate the battery tray 180 degrees to put the battery in the front; it’s just four screws. Remount the ESC on the underside of the tray. Add some weight to the wheels, about two or three ounces in the front, and one in the rear. That’s about five bucks for weights. Cut about three coils out of the shock springs so the bottom links are level, and not pointing down! This will give you a partial droop setup, so you might want to glue the spring to the bottom perches so they don’t slip off, and you should have glue around the house. Put about a quarter inch limiter inside the shocks to limit the articulation to about 45-degrees, with fuel tubing. This will help keep you from getting stuck in holes. You can do all this at next to no cost, and I guarantee it will perform a thousand times better.

WRAP UP
The Temper is based off an older style competition crawler design, and while the hardcore guys have evolved past this point, those guys run custom built rigs. This is still a good practical design that works. It is especially suited for first-time drivers who have never driven an RC since rock crawlers are designed to go slow and combined with durable materials there is little risk of damage. I also think the hardcore project guys will find the parts to be useful on the Temper, as it seems to be built of quality materials throughout. I know many of us have spent more on a servo so this could be good chance for you to try something different. If you’re looking to try a different aspect of RC, and appreciate taking your time to figure how you can overcome an obstacle, then give the Temper some consideration. It might be right up your alley!