Check out this hot homebuilt, James’s Knight’s “Big Oly” Bronco which is based on Tamiya’s proven CC-01 (Cross Country) 4WD off-road chassis. If the name, James Knight, sounds familiar then chances are you are a scale builder because he is the owner of Knight Customs. As you could imagine, the Bronco shown here is just one of the many incredible builds that James has created over the years which made it very hard to narrow it down to just one. 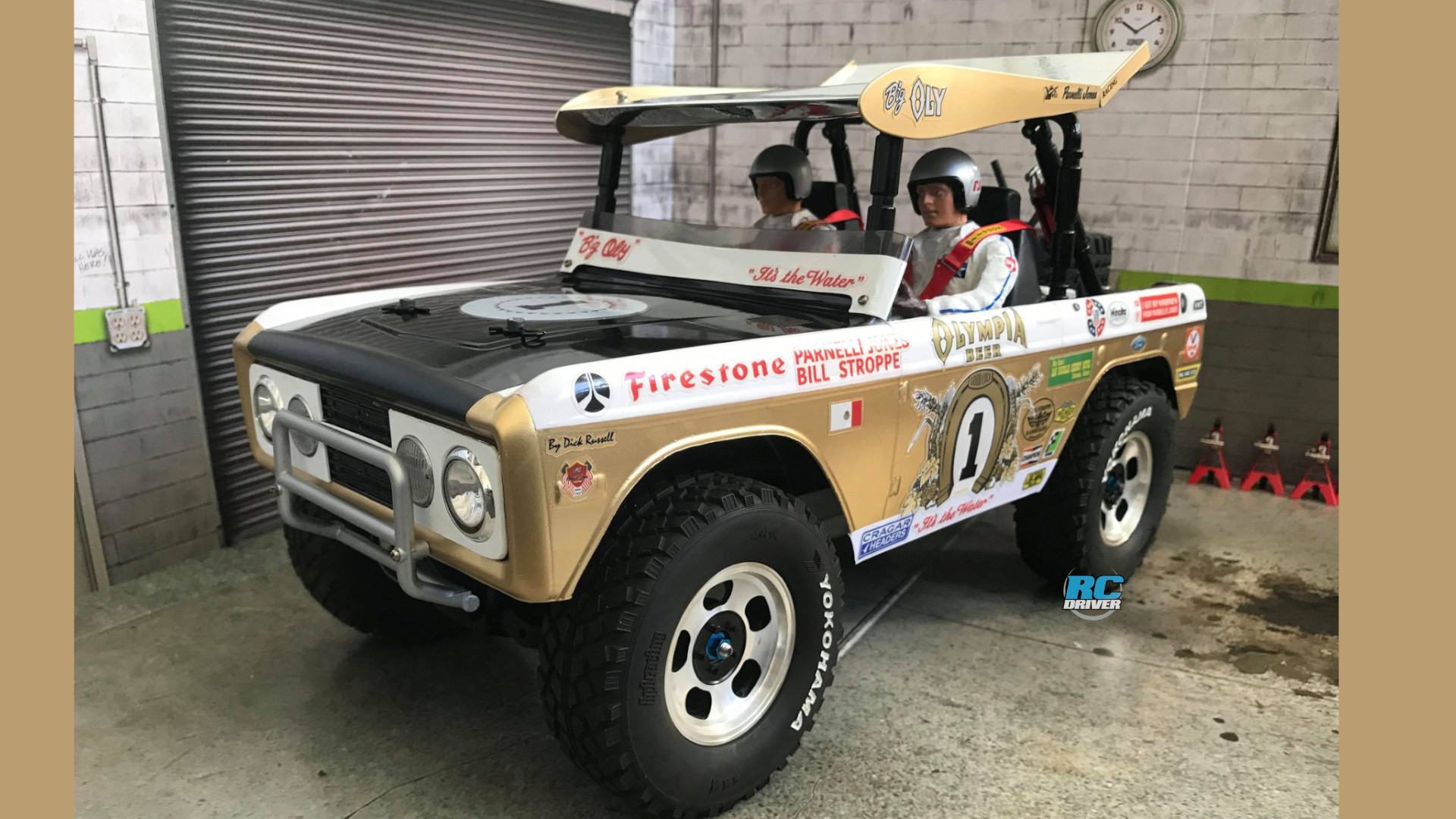 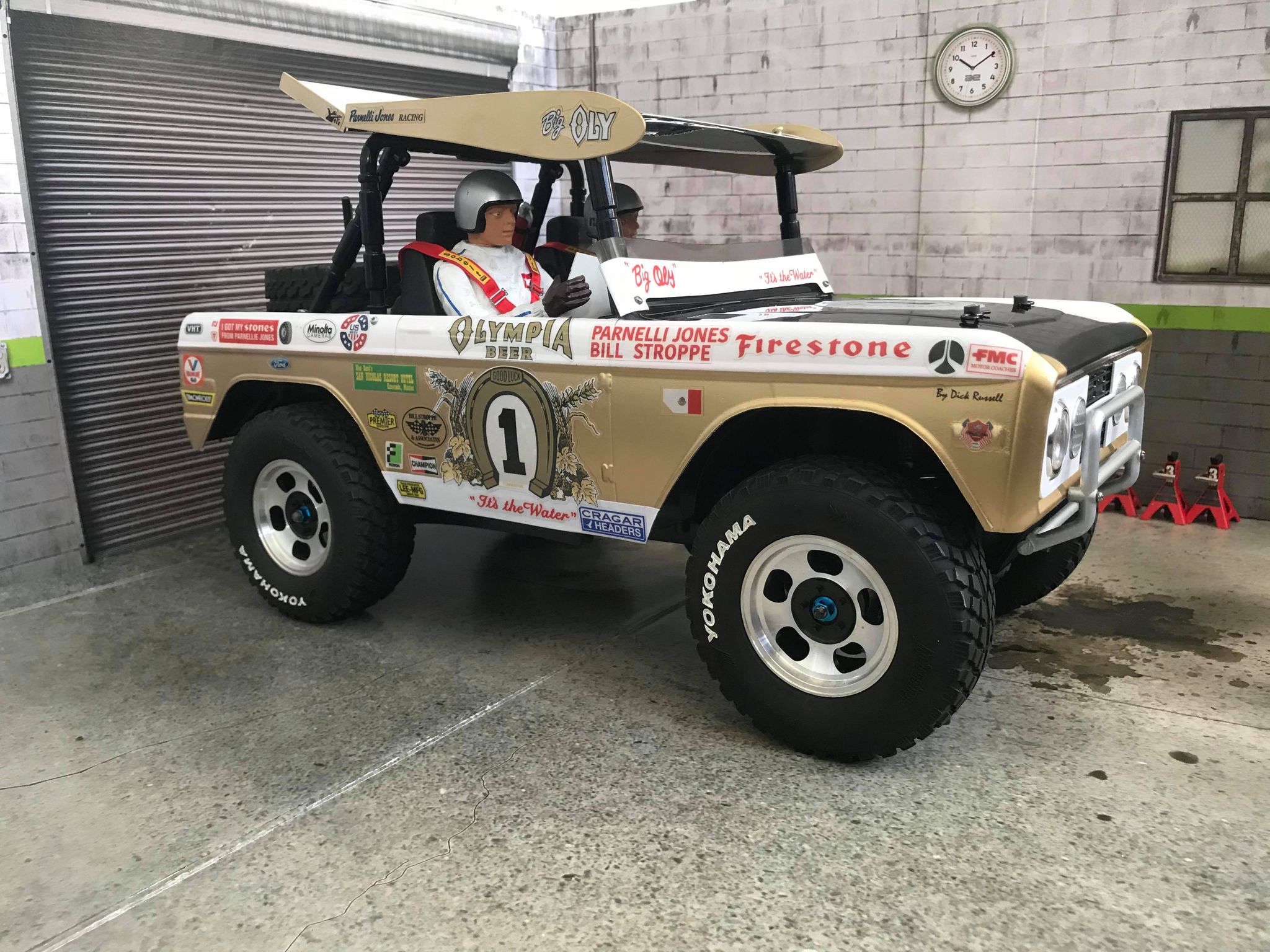 James tells us that this build was a tribute of the Parnelli Jones “Big Oly” Bronco which recently sold at Auction for a whopping 1.8-million dollars. The storied race truck is considered the grandfather of all modern desert trophy trucks as it was the first truly custom chassis that did not use the actual chassis from the production truck body. The “Big Oly” was 2WD with I-beam front suspension and a rear solid trailing arm. Parnelli later went on to race the Chevy Blazer that Tamiya replicated and is known as the Blazing Blazer. Whilst the Tamiya Blazing Blazer is more famous with vintage RC fans, it was “Big Oly” that was actually the original design that made the roof top wing so iconic. 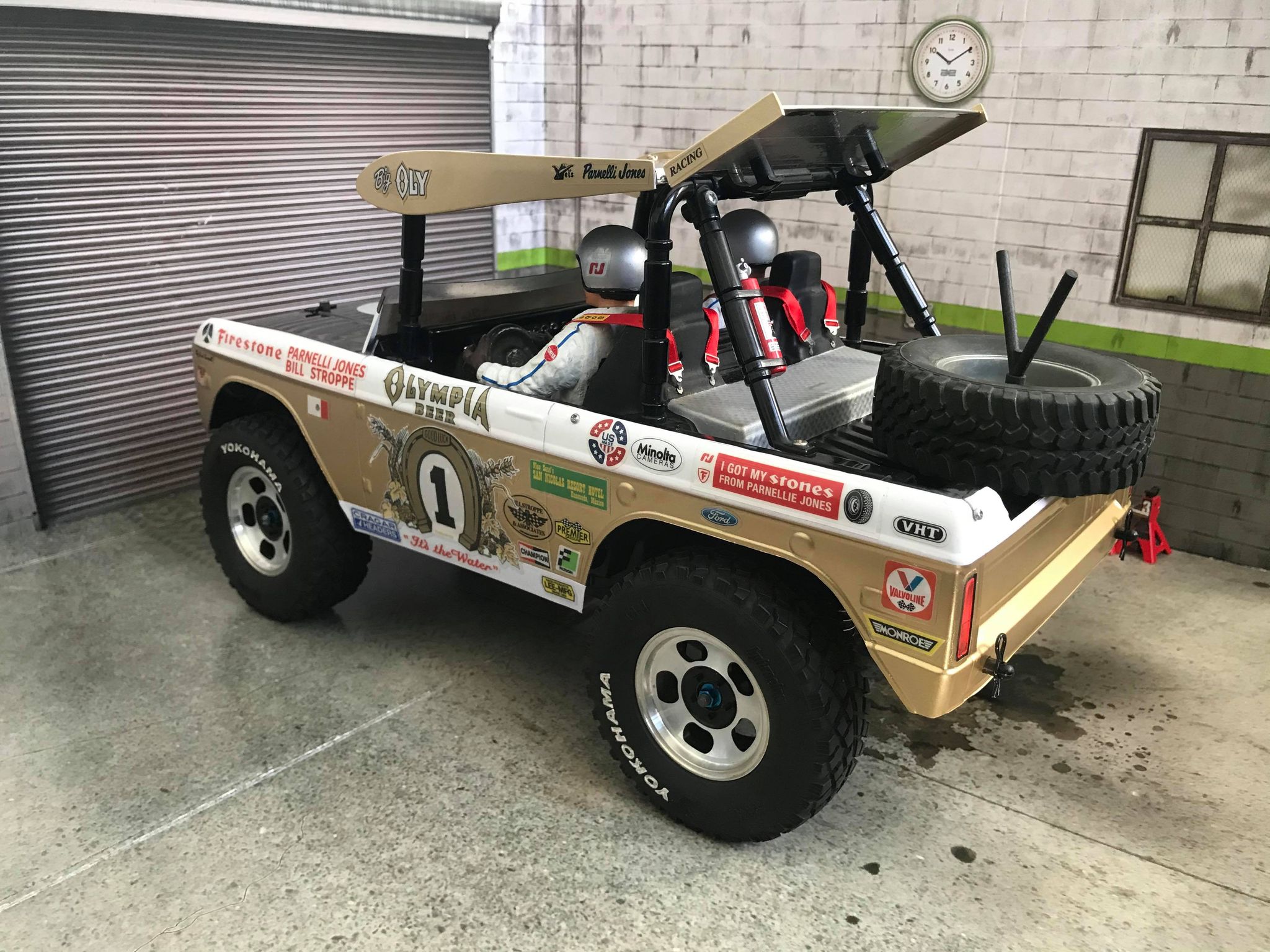 For James’ RC replica build of “Big Oly”, he used a Tamiya CC-01 chassis which is also known as the Cross Country Chassis. The chassis is almost stock except for cutting off the front “box” to allow for more clearance. He then fabricated a cover from the left over parts and some plastic sheet. 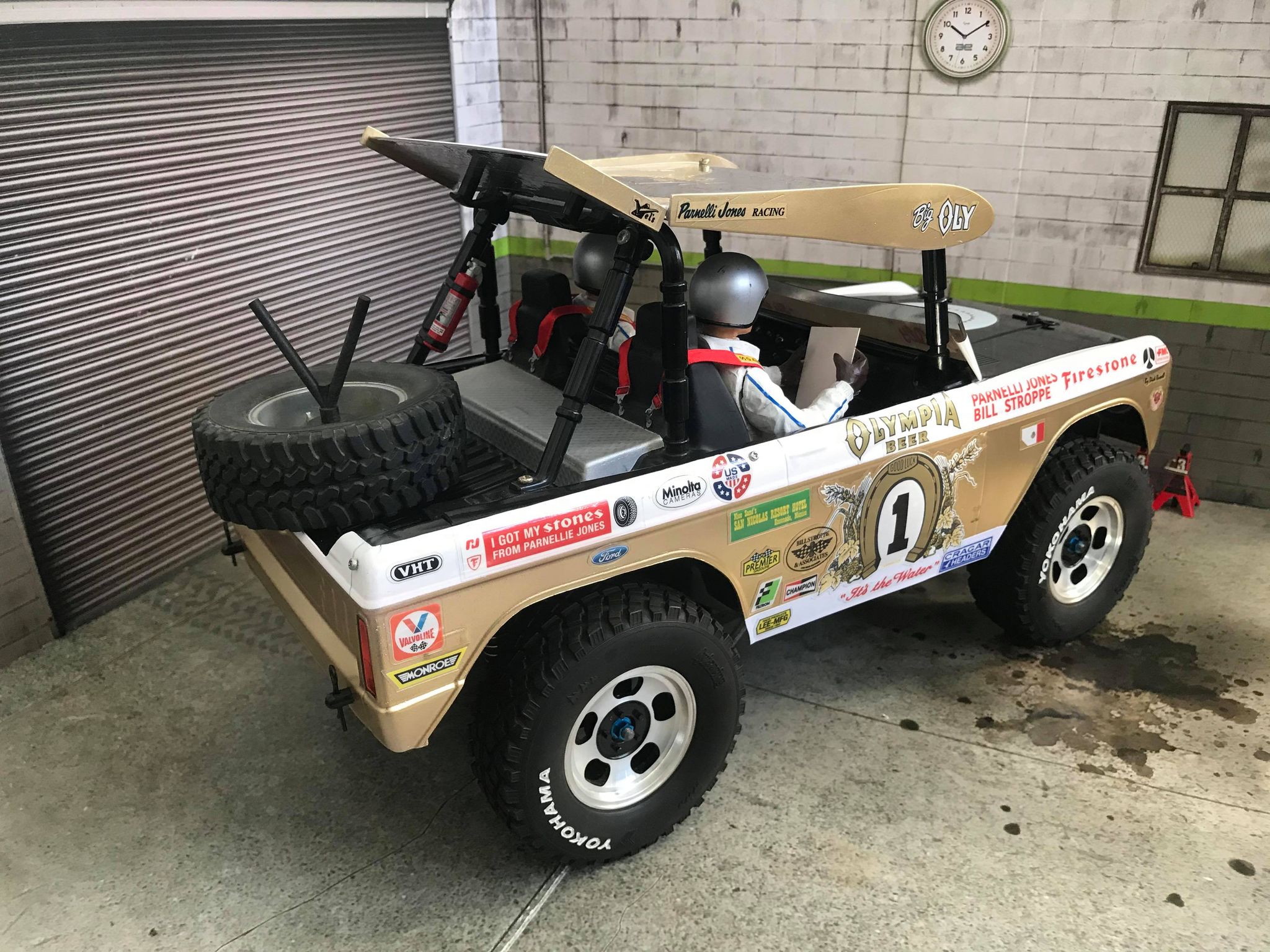 ABOUT THE BUILDER – JAMES KNIGHT

James has been into RC since the mid 80’s with his very first hobby grade RC was the Tamiya Grasshopper. For over 20 years, James has been collecting and customizing vintage RC cars mostly from Tamiya’s first 100. Later he started Knight Customs in 2013 to utilize the growing popularity of 3D printing technology. This enabled him to bring to market low volume parts that other manufacturers were not able to produce with existing manufacturing. James tells us how he feels fortunate to be able to work closely with many of the top scale RC Manufacturers, creating option parts that allow builders to put their own personal touch on their favorite kit.

You can check out the Knight Customs website HERE! 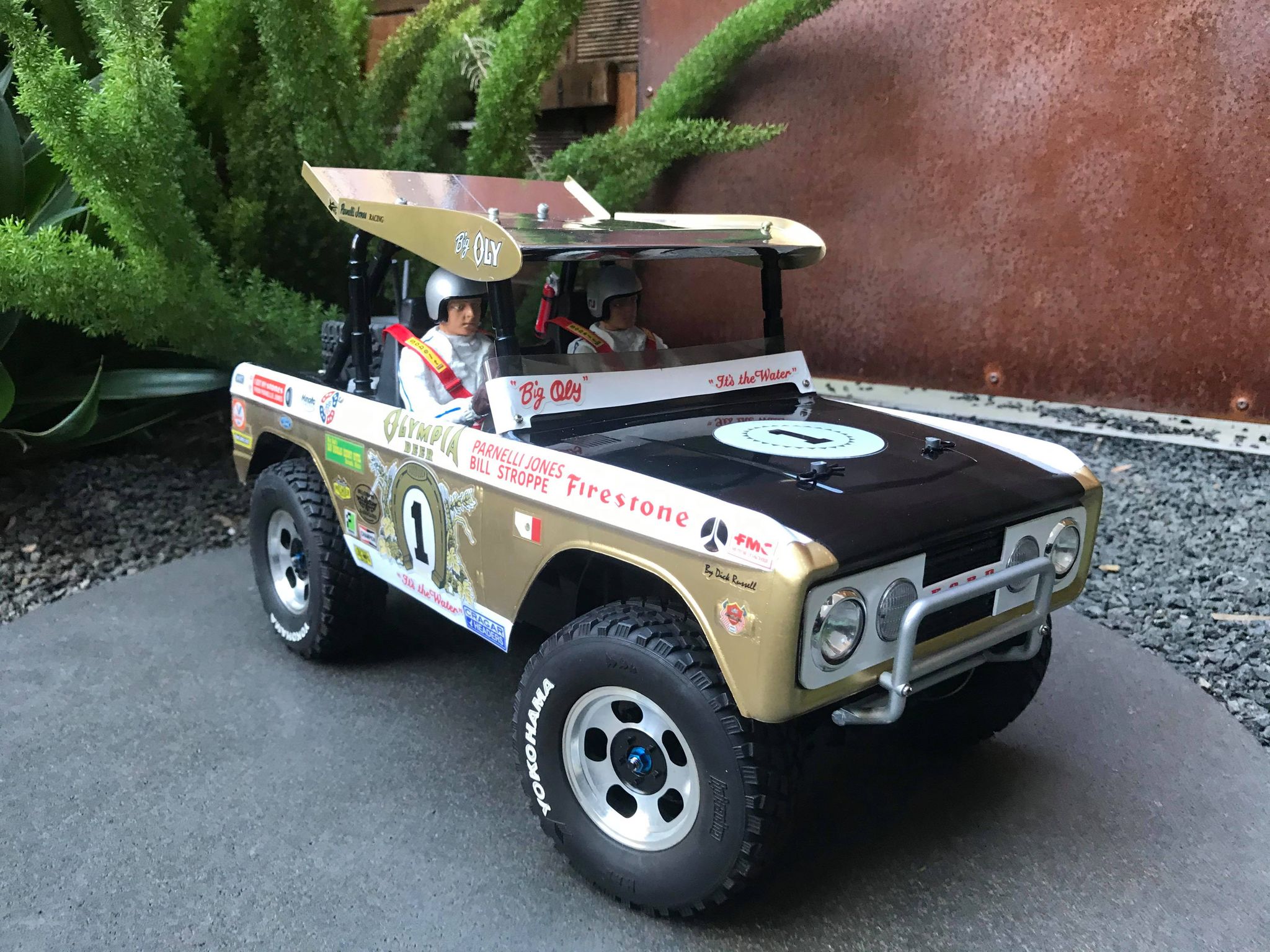 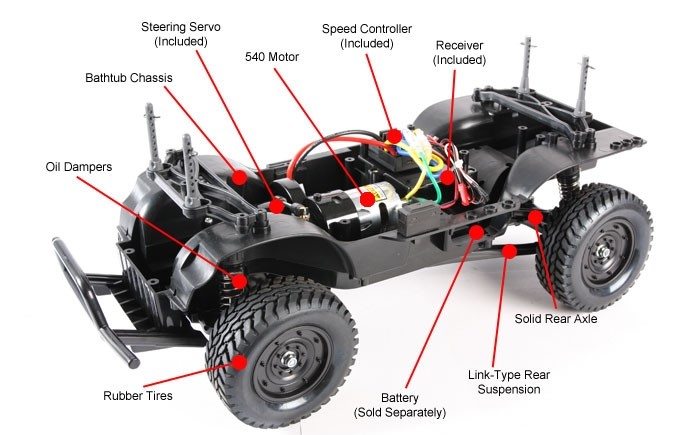