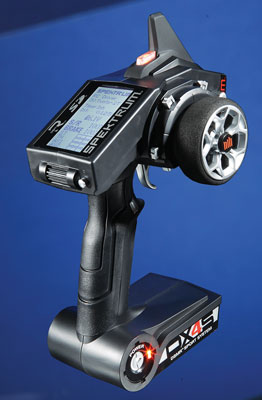 The world of Spektrum radios is one of constant evolution, sprinkled with a bit of revolution now and again. From the early days of the module systems that converted existing radios to 2.4 GHz, people have looked to Spektrum for the latest spread spectrum innovations to keep them glitch-free. The newest release is the DX4S, which introduces DSMR, an update to DSM (Digital Spectrum Modulation) and DSM2. With each iteration, DSM technology has become more reliable with less chance of interference.

Some obvious changes are the new black color, a lack of folding antenna and the “4” in the name, which represents a 4th channel. What’s not immediately obvious is the mixing capability that is going to go over big with crawlers and scale guys. While the DX4S is not aimed directly at the high-end user this latest model in the DX line could be the most versatile yet.

WHO IS IT FOR?
This transmitter is set up for comfort. From its balanced weight to the programmable switches that are strategically placed within easy reach to the three included grips, with which the user can tailor the DX4S to his or her needs. The capabilities that have been designed into the unit make it suitable for any surface RC vehicle and any level of driver experience. New users will appreciate its easy to navigate screen and basic functions and will take comfort in knowing that the radio can grow with them as their interest grows. Bashers, scalers and crawlers will make use of the additional auxiliary channels for any number of available accessories. Racers will find all the adjustment, functions and features needed to dominate the track within the backlit menu. “What about boaters?” you ask? Well they are covered, too. The DX4S and included receiver are marine compatible so boaters can hit the lake, confident that their radio won’t leave their vessel stranded.

FEATURES
All of your basic features are well represented , as well as some not so basic. Reverse switches channel direction for any of the four channels. Travel sets the endpoints, for example the length of the steering servo throw. Each direction can be adjusted independently. Exponential, a.k.a Expo, adjusts the response rate of throttle/brake and steering. Sub-Trim provides minor adjustment electronically to center each channel. Failsafe is critical for nitro models. You can adjust it to apply full brake if the transmitter signal is lost for any reason. Timer can be used as an up timer, starting at zero, or a down timer when running LiPo batteries and you want to know when it’s time to change packs. Since the radio can be programmed for 30 different models it’s likely that you could occasionally have the wrong profile loaded when you turn on your vehicle. The Model Match feature prevents the receiver from responding, and by doing so, avoids potential disaster. ABS (automatic braking system) keeps the wheels from locking up by “pumping” the brakes. Nitro drivers will find the Throttle Punch function useful. It eliminates the lag created by any slop in the throttle linkage.

Now to brief you on a couple of the more exciting features, Mixing and Telemetry. Several mixing options are built-in. Steering mix works well for 4-wheel steering rigs and for any vehicle that uses dual steering servos. Brake mixing is helpful in large scale situations when separate front and rear brake servos are used. If those don’t work for you then you can program your own mixes using any two channels.

The Telemetry function requires a separately purchased appropriate receiver. With it you can monitor your car’s speed, battery voltage and engine or motor temperature.

The switches can be programmed individually allowing you to assign most functions to most buttons. It’s now easy to customize controls to fit your individual needs. There is a conveniently located button that can be programmed for a ROSS system if you have a nitro vehicle that uses the remote starting system.

IN USE
The DX4S is backward compatible with DSM and DSM2 receivers so I chose to bind it to my HPI Trophy Truggy, which currently has a DSM2 receiver installed. The intuitive menu and the scrolling wheel/button made quick work of adjusting the settings to the vehicle. Even though I never gave much thought to the size of the grips an any of my radios, I installed the largest of the three grips that are included with the DX4S and found it to be more comfortable than my others. I set the timer function at 12 minutes, knowing that I usually get at least 15 good minutes on the batteries I was using. Response was instant and accurate. The trigger feel was smooth and allowed for consistent input.

WRAP UP
Obviously you cannot go wrong with any of the Spektrum radio systems. However, if you have not yet chosen which one you would like, the DX4S should be one of the first you consider. It’s versatility, 30 model memory and ease of use can go with you down any RC path you are taking now or may decide to take in the future.