Spending any amount of time on the Tamiya USA website can prove to be dangerous for the radio control addicted. Tamiya has been the gateway for so many people in the RC hobby with their diverse offerings, but even those who get into RC through the brand may not know about everything they offer. On-road, off-road, semis, tanks, the list goes on and as you go through the website, you’re reminded more and more about how much is available in the hobby and that Tamiya is the one company that can truly bring you RC diversity. As we cruised through the twin star’s pages, we came across their front wheel drive 1/10 electric on-road cars. Sure we knew Tamiya offered front wheel drive cars, but as we looked at what was offered, we remembered the fun we’ve had with them in the past and thought it was a great time to feature them again for other who may not have experienced this unique style of road racing machine. Let’s take a look at what Tamiya offers in this particular niche segment of the hobby. 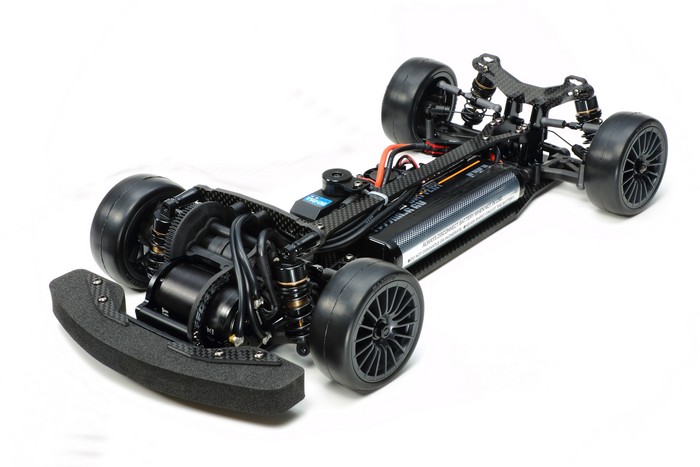 This is a LIMITED EDITION of the FF-04 EVO with black aluminum parts. The FF-04 EVO builds on the carbon fiber double-deck concept of the FF-03 EVO Chassis and takes it to a new level with a range of upgraded and newly-designed parts. The chassis offers superior cornering, and employs a double deck layout with 2.5mm thick lower and 2.0mm thick upper carbon fiber decks. Suspension arms use the same design as those on the TRF418/419 touring car chassis, and power is transmitted via an oil-filled gear differential unit housed in the XV-01 chassis design gearbox. The result is reduced track surface contact during cornering, and even sharper handling. Furthermore, this limited version includes big bore dampers and a new aluminum bumper mount for further performance gains. 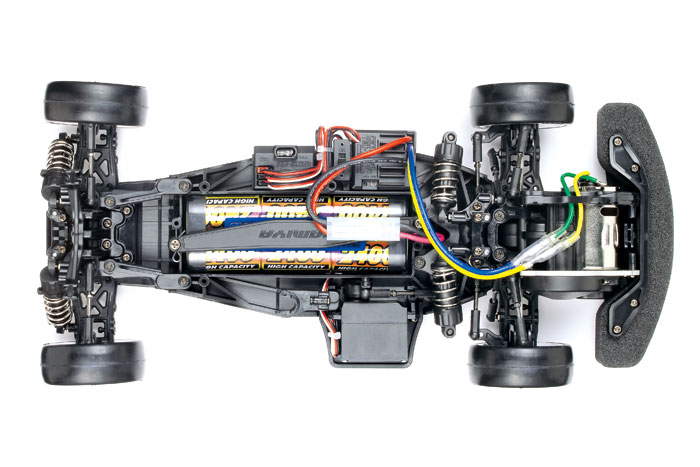 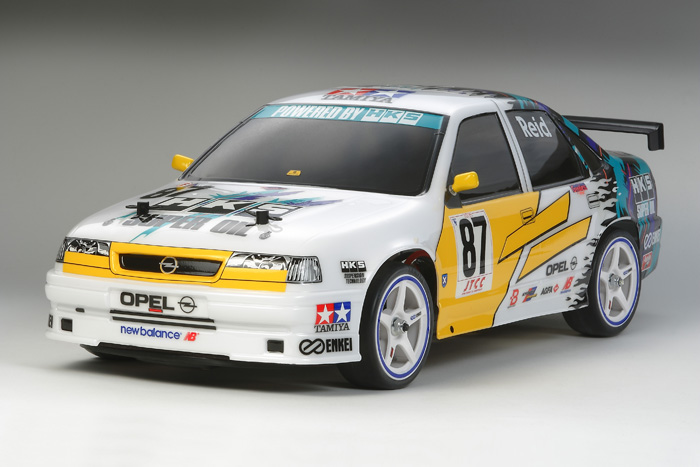 Tamiya originally released this racing car as a 1/10 scale R/C model in 1995 on the front wheel drive FF-01 chassis. It now comes reproduced as a limited edition R/C model on the modern FF-03 chassis.
ITEM# 84228 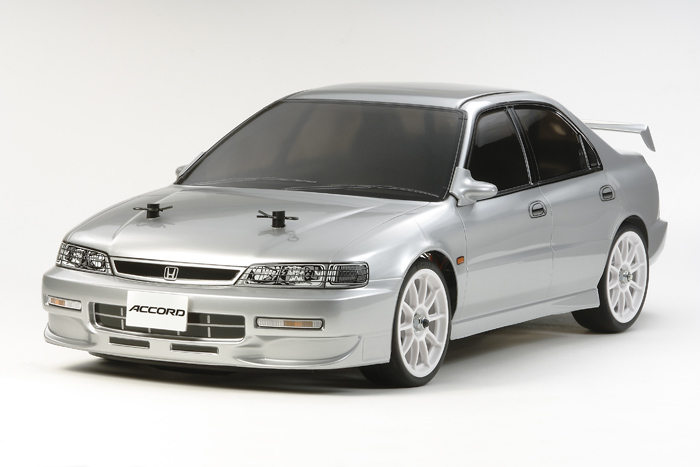 The Honda Accord is one of the most successful models in Honda’s automobile history. Since the 1st-generation Accord debuted in 1976, the car has been acclaimed due to its reliability and performance. Various body styles have been released, including sedan, coupe, and station wagons. Tamiya has reproduced the popular 1996-1997 model year Accord and it is fitted on the 3rd generation FF-03 FWD platform.
ITEM# 58540 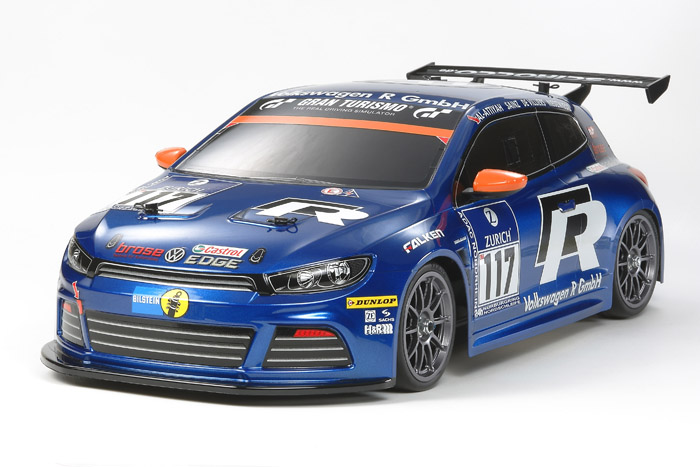 DESCRIPTIONSPECIFICATIONSGALLERYREQUIRED ITEMS
ManualSpare PartsHopups (102)
The 2008 24 Hours Nurburgring had Volkswagen debut a contingent of new Scirocco GT24 race cars. They went on to earn an impressive 1-2 finish in their inaugural race. The car was later updated with a new 2.0-liter inline 4-cylinder turbocharged engine that was notable for being powered by Compressed Natural Gas (CNG), which reduced CO2 emissions by 80%. This machine again demonstrated its superb performance, capturing the AT (alternative powertrain) class titles in 2009, 2010, and 2011. The Tamiya R/C car model is produced in 1/10 scale and the featured chassis underneath is the FF-03 (Tamiya’s 3rd generation Front-Wheel-Drive chassis). The RC model depicts the Scirocco GT24-CNG which raced in the 2011 24 Hours Nurburgring.
ITEM# 58505 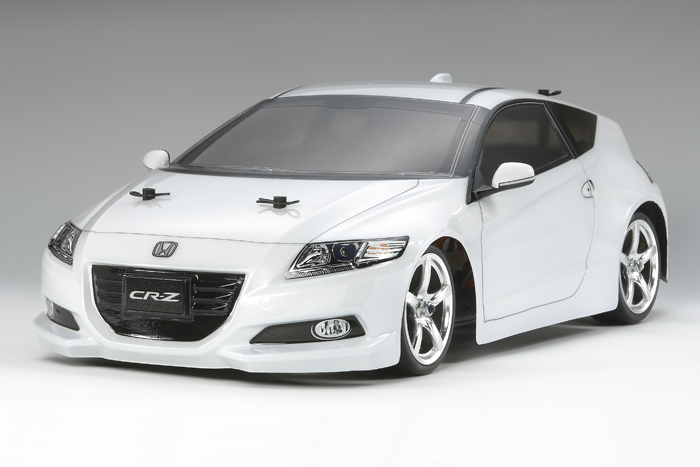 The 2010 3-door hatchback sport hybrid coupe Honda CR-Z comes equipped with a 1.5 liter SOHC 16-valve i-VTEC engine which produces an excellent economy of 25km/l. The Honda CR-Z is also the first hybrid care to include a 6-speed manual transmission whereas its predecessor the CV-T had a paddle-shift transmission. The CR-V won the “Japan Car of the Year for 2010-2011” and now comes accurately reproduced as a 1/10 R/C car loaded on the FF-03 chassis.
ITEM# 58490 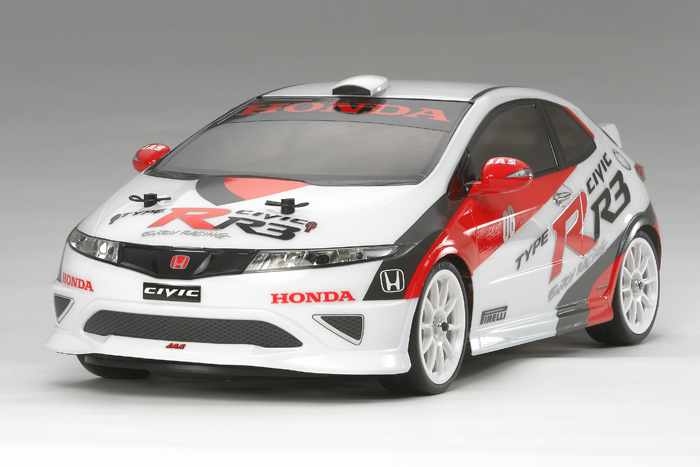 The latest addition to the FF-03 line-up is a racing version of the European Honda Civic Type R. This Civic is a three door hatch back which uses a different chassis and internal layout than its Japanese counterpart. JAS Motorsport, an official Honda customer racing partner, developed this special version to compete in various racing events.
ITEM# 58476 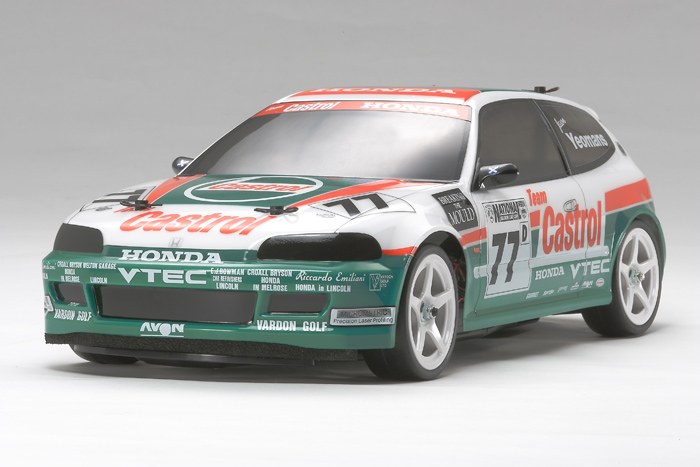 The fifth generation Honda Civic (EG) was first released in 1991. It featured larger dimensions and a more aerodynamic body than its predecessors.
ITEM# 58467