Racing on a paved track or smooth parking lot with a dedicated on-road racecar is an absolute thrill, especially the ones made by Tamiya. They are super responsive and incredibly fast…just what you would want for an on-road car. The chassis are relatively simple with a small parts count, are direct drive 2WD, and lightweight. An added bonus are that these cars do not require super powerful motors or high voltage battery packs to make them lightning fast. Even a relatively low turn brushed motor with a 7.2-7.4 volt battery pack will suffice and not break the bank. If this sounds like something for you, then you are in luck. We compiled Tamiya’s purpose built on-road racecar offerings here in this article along with details for each one. It features four Formula 1 racecars and two Endurance racers. This is a helpful resource so that you can determine which of these Tamiya on-road rides to choose. And we focused on just the ones that come with a body and not the chassis-only kits. 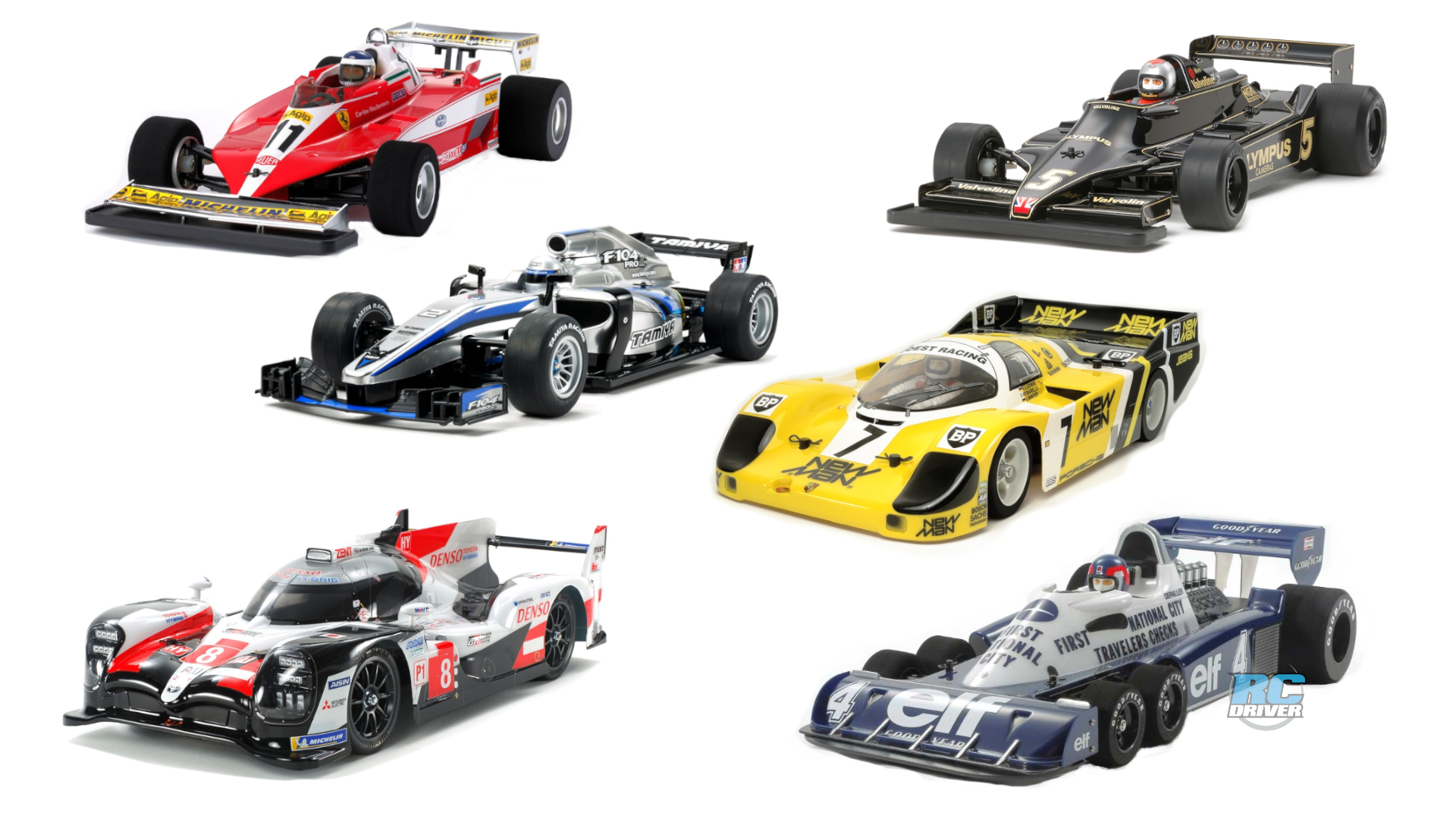 Three of the four formula 1 cars are models of historic racecars from the past. Like this Ferrari 312T3 which is a replica of the F1 piloted by drivers Carlos Reutemann and Gilles Villeneuve during the 1978 racing season. The sleek aerodynamic body is stunning and underneath sat a powerful 3-liter 12-cyhlinder engine. In 1978, the 312T3 made its debut in the South African Grand Prix and later took four victories in the season and came in second in the Constructors’ Championship.

Tamiya did a beautiful job in recreating this notable F1 racecar from Ferrari’s impressive racing lineup. The original 1/10-scale version was released back in 1979 followed by other versions until what we have today. The Ferrari 312T3 item #47374, shown here, now comes mated to the proven Tamiya F104W F1 chassis. A nice bonus to this kit is that Tamiya includes two bodies; one made of red ABS plastic and the other is clear polycarbonate. Additionally, the included sticker sheet allows you to recreate either the number 11 or the number 12 racecar. There are also ABS plastic parts that are used for the detail pieces like the wings and helmeted driver. To match the full-size F1 winner, chrome plated plastic parts are used to replicate the front and rear wings as well as the spoked wheels.

To make the Ferrari 312T3 come alive, Tamiya spec’d its F104W chassis that uses F103 front suspension arms to reproduce the wide stance of the 312T3. An FRP (fiber reinforced plastic) semi-double deck is utilized and places the battery pack longitudinally down the center of the chassis. Providing the suspension are kingpin coil springs up front and a T-bar rear suspension setup wit mono shock for the rear. Tamiya includes a 540 brushed motor that directly drives a spur gear equipped with a ball differential. It is a highly efficient setup to provide plenty of speed and performance.

Easily one of the most recognizable Formula 1 cars ever made, is the Lotus Type 79. This car, nicknamed “Black Beauty”, recorded a pole-to-finish win on its debut race back at the Belgian Grand Prix in 1978. This car also helped Lotus to claim not only the Constructors’ Championship but also the Driver’s Championship as well by racking up numerous wins and dominating the field. 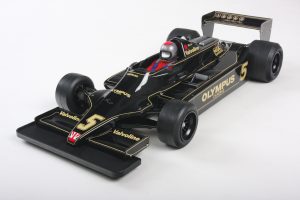 In order to accurately recreate the Lotus Type 79 body, Tamiya took the extra steps and molded many separate body parts from polycarbonate. Along with the main body shell there are separate polycarbonate parts to create the rear wing with side panels, side pontoons, side mirrors and driver torso. Then when you add the ABS helmeted driver’s head and detail stickers, the car comes to life. You have the option of building the car with either car no. 5 driven by the renowned Mario Andretti, or car no. 6 driven by Ronnie Peterson. 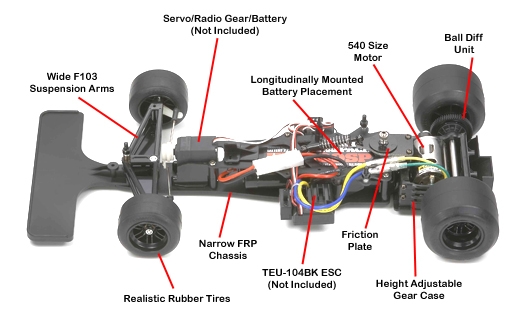 Like the Ferrari 312T3, the Lotus Type 79 also used the F104W chassis. Its wide stance lends itself well to mimic the footprint of the Formula 1 cars that raced in the 70’s like the Lotus. Independent kingpin with coil spring provides suspension up front while a proven 3-point suspension system is used at the rear. It is comprised of friction plates and a coil spring to help keep the rear tires planted. The rear gear case is designed to be adjustable for ground clearance while a 540 brushed motor spins a spur gear equipped with a ball differential. In order to keep the looks true to the full size Lotus Type 79 F1 car, Tamiya includes large diameter rear tires and small diameter front tires. The tires are semi-pneumatic rubber that feature a realistic finish. 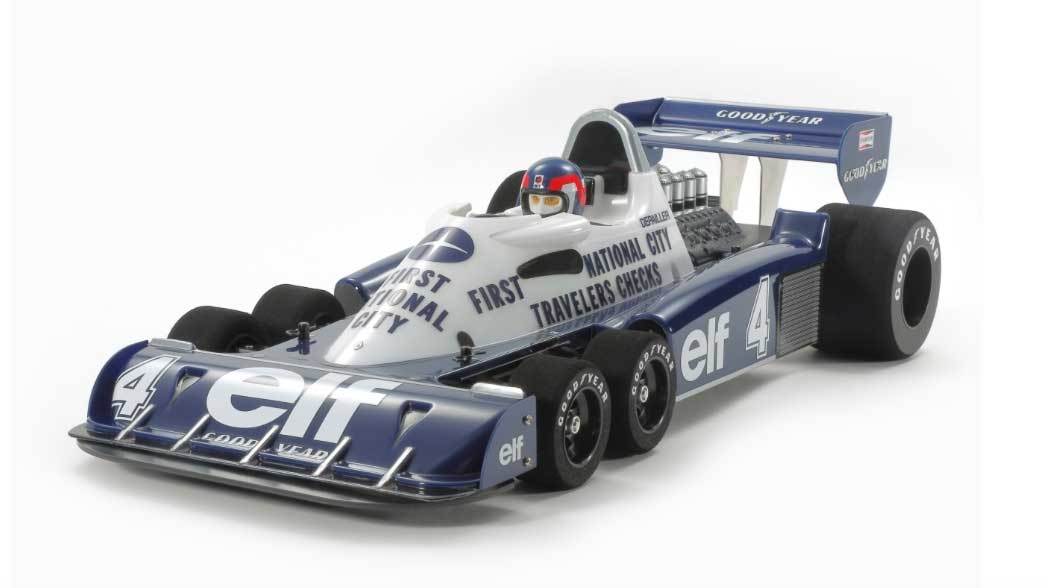 If you are looking for a super unique model of an on-road racecar, then the Tamiya Tyrrell P34 Six Wheeler 1977 Monaco GP is the one. It is the only six-wheeled Formula 1 racecar to ever compete in the history of the sport. Surrounding the car was a lot of fanfare and controversy when in debuted in 1976. The P34 was built with six wheels to take advantage of a more aerodynamic front end thanks to the smaller diameter front tires that could be tucked behind the front bodywork of the car. The use of four tires provides the necessary contact patch with the ground for grip. This 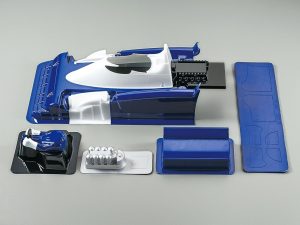 specific version of the P34 faithfully captures the looks of the iconic racecar that competed in the 1977 Monaco Grand Prix.

Tamiya has made a few 1/10-scale version of the famed Tyrrell P34 and this one is a Special Edition version. It comes with the body, engine, rear wing, driver torso and more already painted. And not only that, complex sections are pre-cut for you. So all you need to do is paint the driver’s head and apply the stickers to finish off the body.

A specially modified version of the Tamiya F103 chassis was created just for the Tyrrell P34. A single servo controls the steering of all four front wheels. The front end is designed with kingpin coil spring 4-wheel independent front suspension where there is a single piece of FRP for the lower arm 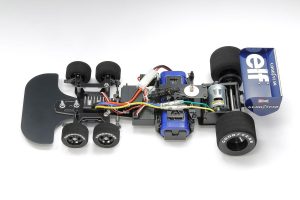 and individual left and right upper arms. Like the F104W, the F103 Six Wheel has a double deck frame with a 1.5mm thick upper and 2.5mm thick lower FRP plates. Suspension for the rear end has a rigid T-bar with a TRF damper and low-friction pads. Tamiya further decked out the P34 with Hop-Up Option parts which are listed below.

The Tamiya F104 Pro II is a departure from the previous three Formula 1 RC cars mentioned above as it is a full-fledged, modern day RC racecar and not a replica of a full-size F1 car. Tamiya designed the F104 Pro II for racing and was evolved from the tried and true F104 Pro. It takes the lightweight and streamlined direct drive of the F104 chassis and pairs it with a new lower deck and upgrade parts. This translates into sharper and more responsive driving feel.

Typically when Tamiya releases special chassis like the F104 Pro II, a body is not included. This time around a body is included and it is a stunning one. It is an original Tamiya design that incorporates realistic body ques from the rear world, specifically inspired by the trends from the 2017 F1 racing season. Up front is a complex wing with a sharp slanted nose that leads to pronounced side pontoons and a low rear wing with diffuser. Separate parts are included for the bargeboards and the induction pod sitting behind the driver. 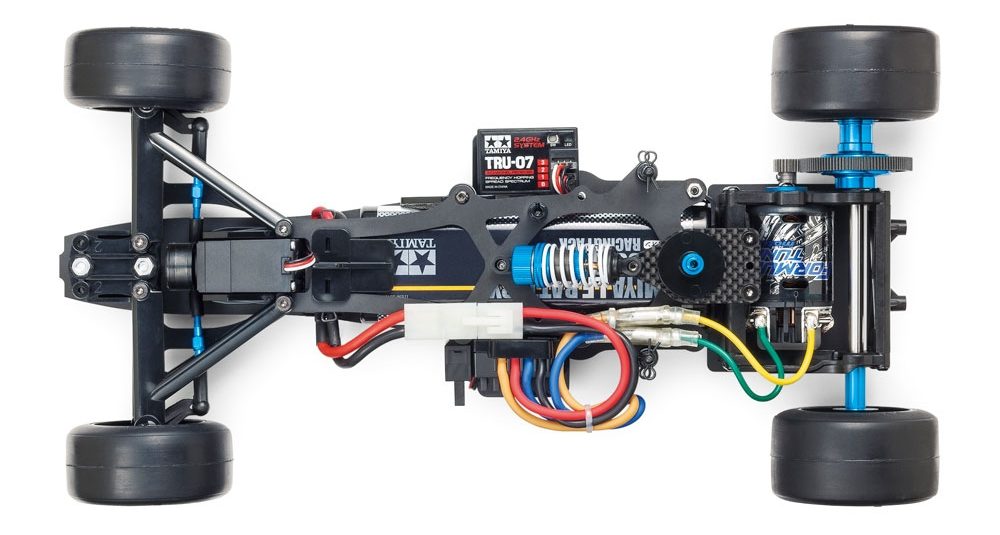 You will find similar chassis features on the F104 Pro II that came from the standard F104 platform. This chassis has been upgraded to make it more refined thus a better on-track performer. A rear rigid setup has a T-bar for smooth pitch damping that works in conjunction with friction plates and TRF damper. The front end has been upgraded with the independent kingpin coil spring suspension’s camber can be altered by switching the upper mount direction where it attaches. A clever feature has also been added to the rear axle where you can swap out the wheels without needing to take apart the aluminum ball differential.

Obviously the Tamiya Toyota Gazoo Racing TS050 Hybrid is not a Formula 1 car but rather an endurance thoroughbred race machine. If you follow endurance racing, then you will know that this specific kit replicates the car that competed throughout the World Endurance Championship 2018-2019 season and was the 2019 winning car at the 24 hours of Le Mans. It needs to be mentioned that the Toyota TS0505 won the famed 24 hours of Le Mans in 2018 as well. 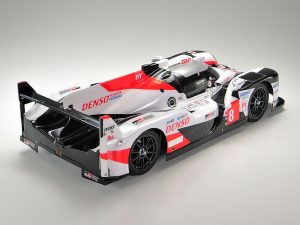 Polycarbonate body masters, Tamiya, did an outstanding job of recreating the full size TS050 Hybrid in 1/10-scale. The body is made of crystal clear, lightweight polycarbonate and accurately captures the unique form of the real car. Additional separate body parts are included to create the nose, headlight buckets, canards, rear wing and shark fin that is located behind the cockpit. Incredibly detailed sticker sheets allow you to add the numerous sponsor logos and many of the black and red sections of the body to reduce the amount of painting required. Lastly a nice set of 10-spoke plastic wheels that are paired with semi-pneumatic tires give the correct look and performance.

The F103GT is a proven performer and has been used on previous Tamiya cars. You can quickly ascertain that it was developed from the F1 chassis made by Tamiya. It utilizes a rear mounted direct drive motor setup along with a double deck FRP chassis decks. An FRP T-bar is the centerpiece of the rigid rear suspension system that work in unison with the friction plate and coil spring. Up front are upper and lower suspension arms with a spring mounted on the kingpin for damping. 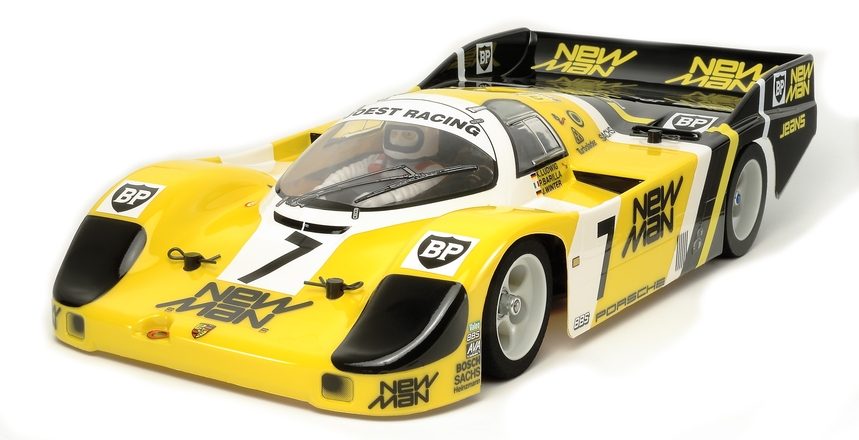 The last of Tamiya’s purpose built on-road racecar offerings is another endurance racecar and also a 24 Hours of Le Mans race winner. Here is the Tamiya Newman Joest Racing Porsche 956. In 1984, the Newman Joest Racing Porsche 956 entered the 24 Hours of Le Mans, arguably the toughest endurance race, and went on to claim the overall victory and incredibly came back in 1985 and won it again. The Joest Racing team was founded back in 1978 and achieved numerous successes in the world of motorsports with the Le Mans being the clear standouts. 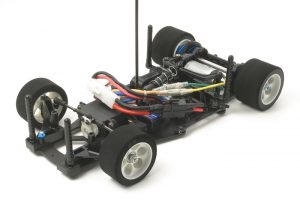 Out of the six cars highlighted here, the Newman Joest Racing Porsche 956 is the only 1/12-scale. Tamiya created a beautiful polycarbonate version of the Porsche 956 body. It also includes a nice sticker sheet to replicate the Le Mans winner and there is even a driver figure to make the car look more scale.

At 1/12-scale, the RM-01 chassis is compact and uses a 2.5mm thick black FRP chassis plate. Like the other on-road cars, the RM-01 uses a direct-drive setup that is equipped with an aluminum diff housing and steel rear shaft. A brushed 380 size motor comes stock, but a 540 can be installed in its place. There rear suspension is a pivot-ball link rear (PBLR) system features a center pivot ball, a pitch damper to lessen chassis pitch movement and a roll damper and side links are used to control chassis roll. White molded plastic wheels wrapped with high-grip sponge tires provide plenty of traction.