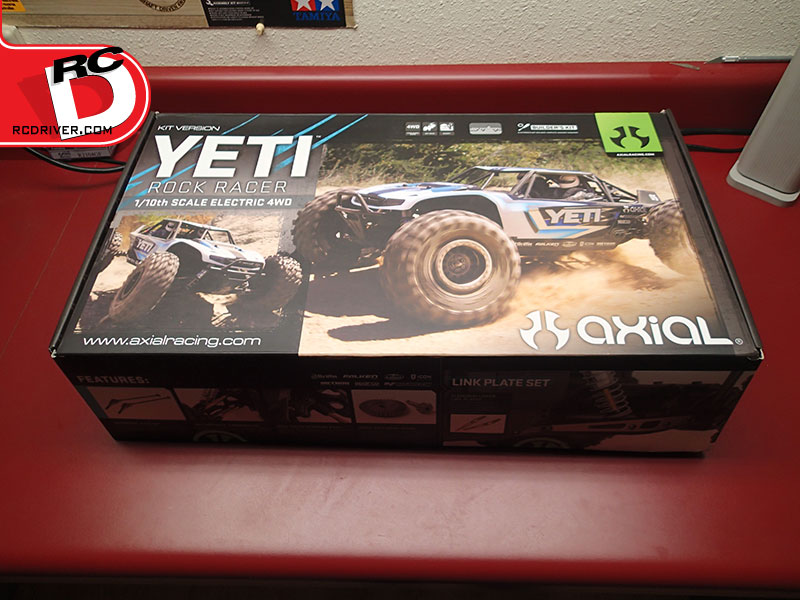 This year Axial has shaken up the off-road scene with the Yeti.  The 1/10th scale Yeti RTR and the 1/8th scale Yeti XL RTR were released mid-year 2014.  The capable rock racers feature a solid rear axle with independent front suspension.  Axial then in late 2014, the 1/10th Yeti kit was released and the 1/8th kit soon followed.  The release of the kits where welcomed by those who not only enjoy building their vehicles, but also by those who prefer using their choice of electronics without having to just remove what comes with the RTR versions.  Finally, as with all the Axial vehicles, the kit includes some upgraded parts not found in the RTR versions. Now lets check out some build highlights.

BUILD NOTES:
The build of the 1/10th Axial Yeti is an enjoyable experience, but requires an ample amount of time to complete.  Start to finish, excluding the painting of the body, the build takes 8 to 10 hours if you take your time and work as a leisurely pace.  Before starting the build, check out the pages at the end of the manual.  Axial includes some additional information and options for building the kit.  There were a couple confusing items in the instruction manual, but most appear to be resolved in the manual located on Axial’s website.  I assume all kits will be shipped with the updated manuals, but if you are building one of the Yeti kits and something does not appear to make sense, download a copy of the manual online.  While going through the build, a few items to take note of would include:
•    Step 9 shows to use part AX80072[1], but part AX80072[2] should be used.
•    Step 29 indicates a quantity of 2 AX31067, but only one is included in the kit and used.
•    Step 64 shows the mounting of the wheels to the tires.  There are three different slots were the tires can be mounted.  Adjusting the mounting position changes the amount of air that can enter the tire thus adding adjustability to breather holes for fine tuning performance.

WRAP UP:
The Axial 1/10th Yeti kit build was a blast.  It is awesome to see Axial continue to grow and improve with each kit they release.  The Yeti is the perfect combination of the Wraith and the Exo Terra buggy.  The cage and body are simple to remove to expose the driveline and radio gear for performing routine maintenance.  The parts fit well and there is a vast amount of accessories on the market to make the kit reflect your needs.  I know that I can’t wait to check out the two-speed transmission upgrade.  Finally, the adjustability of the suspension will ensure Yeti can be adjusted to fit anyone’s driving style.  If you love driving off-road, ensure the Axial Yeti is on your must have list of vehicles.