For several years now, scale trail drivers have hovered around their computers waiting for registration to open up for an amazing RC event that takes place at Rose Point Park in New Butler Pennsylvania. That event is the East Coast Scale Challenge. Registration is limited, so you have to be quick on the clicks to get in and this year the registration spots filled to max capacity in a matter of minutes rather than the few days it took to fill the slots of years past.

The event attracts some of the best RC model builders in the scale truck scene to a beautiful family oriented park with plenty of camping amenities and activities. RV’s roll in from all over the country and those participants from farther away rent some of the on site yurts, cabins and facility RV’s. This year, main event sponsor RC4WD invited us to attend the event. After a brief rundown of the event schedule, we graciously accepted the invite and headed there the week of August 18-20, 2017. 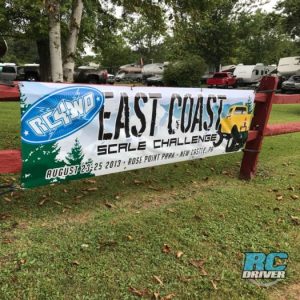 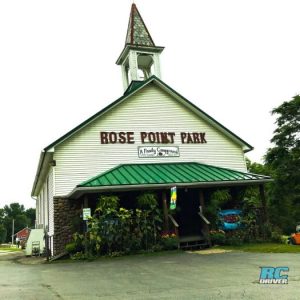 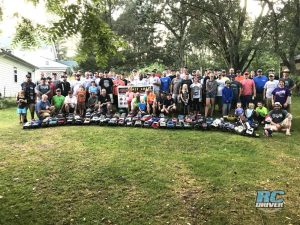 Rose Point park is a family owned park and the super friendly staff is more than welcoming at the front office and market when you arrive. From there we headed into the park to find out what was going on. We stayed at a nearby hotel because the park was full, but making the trek to have fun each day was not an issue. Plus it allowed travel friend Tony Phalen of Competition X and I to hit up the local Sheetz for junk food every day.

The camp grounds are fairly large and having a motorized cart certainly helps get your around. The trails are actually located away from the camping site. To access the RC trails, you’ll have to go back out of the campsite entrance and head down towards the river where you’ll see a small path that heads off into the woods. Once you enter the woods, it’s like you’re in a whole new world. Massive trees provide a high cover to the walking trails below. The woods line a swiftly flowing river and there is a stream the flows from deep into the woods that helps feed that river. As you look around, you’ll see an awesome spectacle of nature as glaciers had carved out the terrain. Rocks, trees, moss, plant life, river rock, mud, water, hills; all the terrain you could want for a trail truck event is all right here.

For many years John Thorton waved his wand to put on the event, but as it grew, he had to pass the torch on to new coordinators Matt Lockwood and Ed Pacola along with a helpful staff of volunteers. These guys worked hard to put on a great show and had everything running smooth from scale scoring, to setting up trails and keeping track of the points. For their first year, the event appeared to run smooth to us, but after a quick talk they said there were times they were on edge. You fooled us crew, great job! 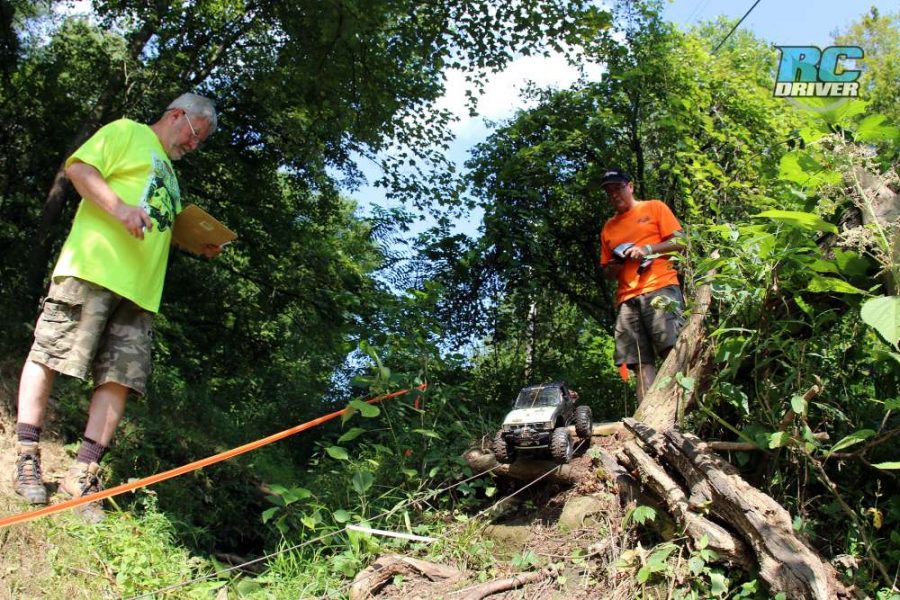 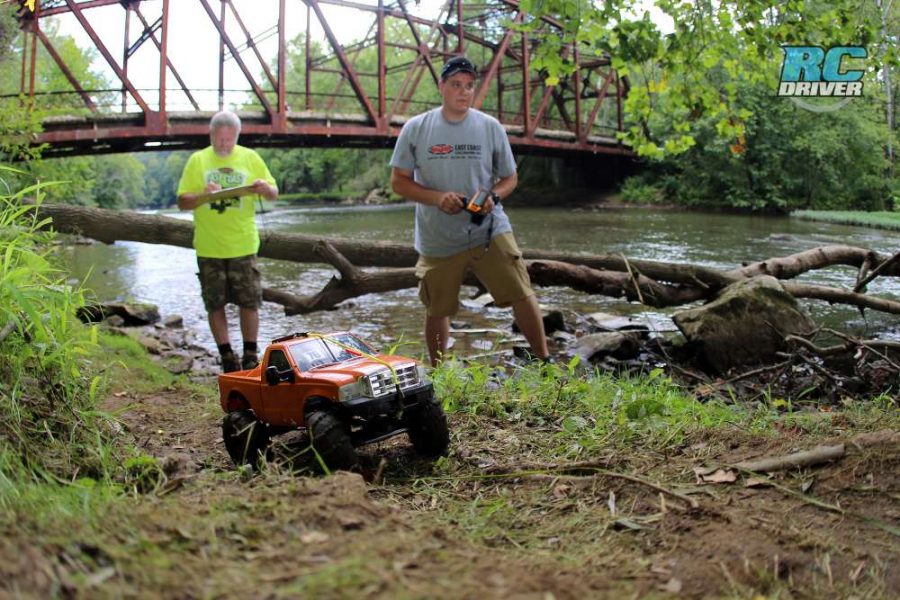 If you head down to the trails where the competition is held before the designated time frames, you won’t find anything. Matt, Ed and crew have scouted the trails ahead of time and know exactly where they will be, but only put the gate markers out a few hours in advance in order to keep the playing field as level as possible for the competitors. The Class 0 trail was fairly easy and just right for the true scale looking builds that pushed through the course. It was very cool to see these rigs in action. As the different classes hit the trails, you could see the degree of difficulty increase in the courses. Courses tested driving skill, vehicle set-up, durability, ability to find drive lines and a test of accessory use like winching. Rigs in the event experienced all of what nature had to offer at Rose Point. Some trucks made their way with ease and others struggled; we even saw one rig toted away with a wisp of smoke trailing behind.

So rigs are split up into classes, Class 0, 1, 2 and 3. Class 1 being finely crafted scale machines that you would think would never make it off the fireplace mantel and Class 3 being fully modified rigs that were built to dominate the trails as quickly as possible, with little rule sets to follow. Before you head out for competition, you have to run your car through tech where it is checked and approved for your entered class and then your rig is accessed for scale points that are used in your scoring. As for how drivers did and who did what on the trails, it is very difficult to follow at a trail event. Everyone is on their own times, skipping from course to course and only the staff behind the computer really knows what is happening. So you’ll have to take it all in through our photo gallery in this article to see some of the exciting moments and challenges from the event. 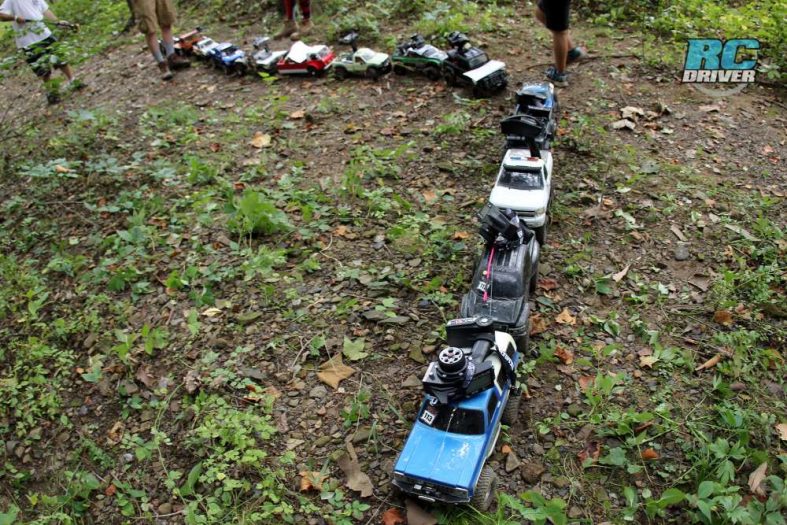 From what this reporter could tell by walking through the camps and on the trails as drivers were gathered around enjoying time with other hobbyists and running on the trails themselves, this is one successful event. Everyone was having a good time. Drivers were challenged on the trails. There was plenty of joking and bets and a general feel of a big group of friends all just getting along. I was able to hit the trails in Class 0 with an RC4WD Blazer and the trail was so much fun. I spent the majority of the time behind the camera though to get some event shots, but after the event was over, went out with a group of drivers and a stock RC4WD D110 and tried the trails I watched drivers do battle on from behind the camera lens. I have to say so many drivers made passing through the trails and gates look easy. Congratulations to everyone who simply put their rigs on the trails. There were some incredible challenges and many drivers put on a great show.

EAST COAST SCALE CHALLENGE WRAP-UP
At the end of the East Coast Scale Challenge, drivers could pick up a ticket for the BBQ buffet which was so good I went back for seconds, followed by a massive giveaway ceremony and of course awards ceremony for both concourse and the scored scale and trail event. Drivers left with their hands full of goodies and many won some pretty neat trophies and ribbons. The East Coast Scale Challenge was pure fun and this RC enthusiast would love to go back again. There is a cap on entries and some talk of expansion due to the popularity. But with whatever happens, if you do want to try and get into this event, you’ll have to wait by that computer when sign-ups open and be quick on the click. We’d like to thank RC4WD for inviting us to this event and showing us such a great time at ECSC. RC4WD not only offers some incredibly scale detailed RC parts and rigs, but there is a great group of people behind the brand that want to make certain you have the best possible experience in the hobby.