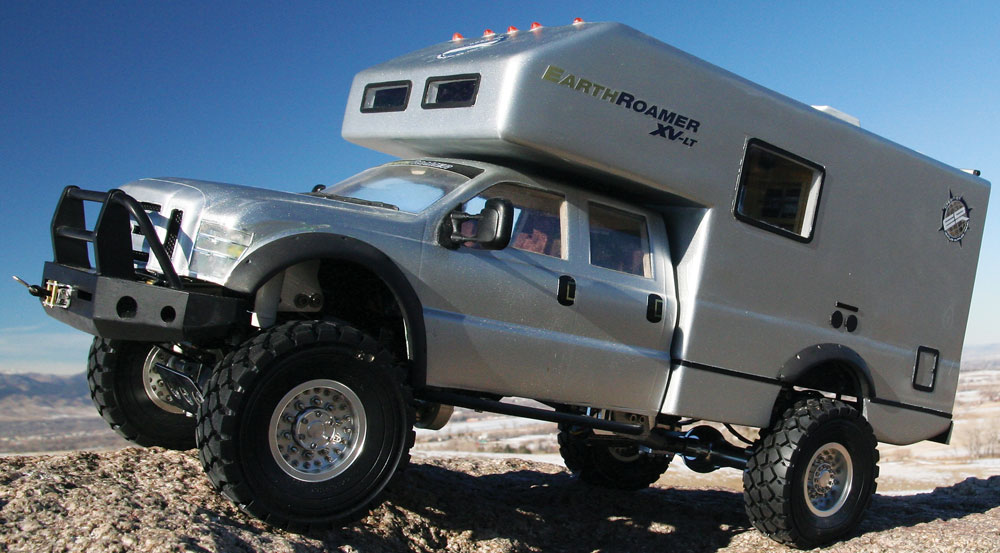 Cool builds take time and Lonnie Sexton has built a rig that is beyond cool and has taken more than five years to complete. In late 2007, I was online on a forum and remember running across his idea to build an RC EarthRoamer Xpedition vehicle. I ensured that I had the post marked so that I could track the progress. Lonnie indicated that the idea for the build had started when he was on scale4x4rc.org and he had seen a group of builders starting a competition for a camper build-off. He then performed an internet search of expedition style campers and when the EarthRoamer came up in the search, he knew that he had to build one. Lonnie started by compiling two different parts list, one would be the ultimate expedition camper and the other list was how it could be built on a budget. Willing to take the risk, Lonnie emailed EarthRoamer and started discussing the build with the company. After several emails and a face-to-face conversation, EarthRoamer agreed to sponsor the build.

By April of 2008, parts had been ordered and the build had begun. By the end of 2008, a majority of the work on the chassis and camper interior had been completed. In early 2009, the bad economy hit our great nation and countless small businesses were affected, EarthRoamer was one of these small businesses. Worked slowed on the scale build for a period of time until the economy started to improve and the final push was made to complete the vehicle in late 2012. Following the photo shoot in early 2013, the final product was delivered to the EarthRoamer factory.

Lonnie has over 20 years of RC experience, but about five years ago he started getting into crawlers and scalers. Remarkably, this is actually his first custom build! When we first met to take the pictures, I was amazed at the level of detail in each part of the build. I had watched this truck come to life over several years on an online forum and the pictures did not do the build justice. Measuring over 27.5 inches long and 13 inches tall, taking just under 300 hours of build time and a cost of about $4,000 to build, this is truly one of the top scale RC builds out there. 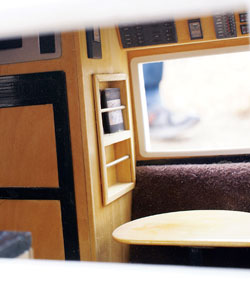 DETAILS
CHASSIS
The chassis started out as an RC4WD Bruiser 3-speed 1/10-scale truck kit that has been extended nearly 7.5 inches to accommodate the massive camper.

SUSPENSION
The final weight of the truck is over 12.5 pounds, thus a full leaf sprung suspension was an excellent choice for drivability and realism. While many people do not believe that leaf springs can provide ample articulation with a truck of this size, the leaf springs do provide decent flex where a standard coil-over suspension would not hold up under the weight of the chassis.

ELECTRONICS
Utilizing a Spektrum DX6 2.4GHz 6-channel radio, Lonnie was wishing for more channels. From the remote, the driver needs to operate throttle, steering, two winches, lights and shifting of the 3-speed transmission.

A high turn crawler motor and Novak Crawler ESC provide the power to the driveline that powers the beast over nearly any scale obstacle. High capacity 2-cell LiPo batteries power the motor and winches while a custom battery pack, which is recharged using the solar panels on the roof, power the receiver and lights.

BODY
The truck cab started out as a Pro-Line Ford F350 with a full custom interior. The interior has working dash lights, simulated TV’s in the headrests of the front seats and an illuminated GPS. Custom molded fender flares give the truck the perfect scale look.

The camper was constructed from cell foam, basswood, brass, and styrene coated with Plasti-Paste by Smooth-on. Wires for the marker and interior lights were run within the cell foam walls. The interior is complete with a kitchen outfitted with a granite countertop, cloth seats, carpet, and more. While investigating the camper you will find scale copies of the Overland Journal, a big screen TV, plenty of lighting to enjoy a cup of coffee from the kitchen, and a scale certificate of authenticity that is smaller than an SD memory card. Lonnie has gone above and beyond what anyone could wish for in a scale rig.

The bumpers are fabricated from brass and the rear taillights are custom molded and LED illuminated. The rear portion of the truck has two opening doors that house the secondary battery pack and additional electronics for the lighting. No detail has been overlooked on this beast, right down to the sewer connections.

WHEELS AND TIRES
The RC4WD Militant wheels are wrapped in RC4WD’s 1.9 MILSPEC ZXL tires that provide excellent traction over numerous surfaces, from loose sand to dirt to snow and ice. The stance of the truck was perfect and making the truck difficult to distinguish from the real thing. 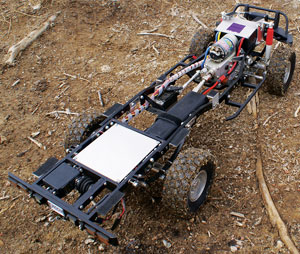 ON THE TRAIL
While exchanging emails with Lonnie, I explained to him that I had a found a location that would be a ton of fun to run the EarthRoamer. I sent him some sample photos that I had taken with one of my scale rigs, but explained that I did not expect him to push the truck to the limits for the photo shoot and to only drive in the areas where he was comfortable. I did not want to be the guy responsible for sinking a $4,000 RC truck in the lake.

Lonnie showed up and he embraced the true capabilities of the EarthRoamer by pushing the truck through harsh terrain and it handled everything we threw at it. While the truck weighed in at over 12 pounds, it was surprisingly nimble. The combination of the overall weight, the 3-speed transmission and the MIL-SPEC tires kept the truck planted as the vehicle made its way down snow covered paths, over sandy beaches and through some thick, nasty mud.

After forging our path in the un-chartered scale territory, we made our way to some mildly challenging obstacles. As the truck trudged through the virgin wilderness, for the first time the truck got stuck. Upon closer inspection, we found that the front drive shaft had come loose at some point during our adventure. After a little backtracking, we were able to find the missing part and perform a quick field repair to continue the scale adventure.

ROUNDUP
The 1/10-scale Ford F-550 EarthRoamer possesses all the attributes of the full-size Xpedition vehicle. The truck was agile and extremely capable for a rig of its size. Even with all the scale additions, the center of gravity was not excessive and it handled the roughest scale terrain with ease. Shortly after the photo shoot, the truck was delivered to the EarthRoamer factory in Dacono, Colorado.

Lonnie summed up the build by saying, “Thanks to everyone that assisted with parts, watched the build on the forums and kept me going. This included all the tips and inspiration from the old school builders. Thanks to the fantastic vendors that provided topnotch products. Finally, a special thanks to EarthRoamer, without their support I wouldn’t have had this challenging and rewarding opportunity.”