Get Geared Up – The Story of a HoBao Racing Pit Space

Meet Mike. You will know that Mike is present because of the catastrophic mess and sprawl that follows him everywhere. His buggy is stripped of its shocks and tires and lays halfway into the next pit over, making the twelve year old next to him work in half a pit space and balance his cherry coke precariously atop his charger while he fights to rebuild the entire front end of his SC before the next heat begins. In ten minutes. Needless to say, Mike is unaware that his mess is inconveniencing his fellow racers, including the seventy four year old on the other side of him who is staring blankly at a set of tools that is not his, half a monster truck chassis, a set of drift tires, and two and a third chargers. Don’t ask. The old man says nothing as he watches little Joey Upstart slam the front tires back on his truck and run for the track. All without spilling his Cherry Coke. The shame being that while Joey goes out and runs the best race of his life, qualifying first in the B main, Mike’s disaster area grows to encompass more of the adjacent pit and the cherry coke is emptied onto little Joey’s brand new charger that he mowed lawns and clipped his great aunt’s toenails for a whole summer to save money for. Mike takes no notice, just curses the young boy under his breath when the puddle of sticky, dark, electrified liquid cements his drift car to the bench. In Joey’s pit. 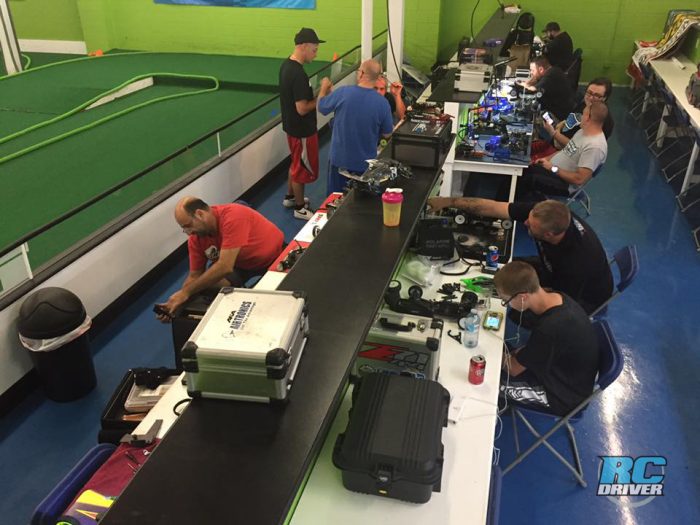 Everyone knows a Mike. His name might not be Mike, but he’s the walking disaster that hoards an inordinate amount of space in the pits, even though he has no more stuff than the person next to him. His tools come into pit lane in ziplock baggies that end up torn and strewn about the pit lanes, leaving his tools to spread incessantly further away. The tools themselves nothing more than the hex keys that came with his various models, unlabeled and darkly colored. They disappear pretty much everywhere, so it is necessary to carry multiples of everything. Cardboard boxes hold spare parts and empty parts trees, grocery bags house his batteries and his lack of a pit mat allows the clutter to slide in a steady, unstoppable circle outward from his pit. Screws litter the floor and there is the constant smell of CA glue hanging about wherever he may go. Right now, the shocks for his buggy are balanced in the open mouths of bottles he fished out of the recycle bin and nearly a dozen screws are being trampled into the dirt beneath his feet. As he slides his buggy over, one of the loose a-arms catches his charging wire and rips it from the battery, flinging the pack into the row of bottles that hold his shocks, and there is instantly silicone oil, sparks, and swearing. More screws hit the dirt, along with his last 2.5 hex driver, never to be seen again. 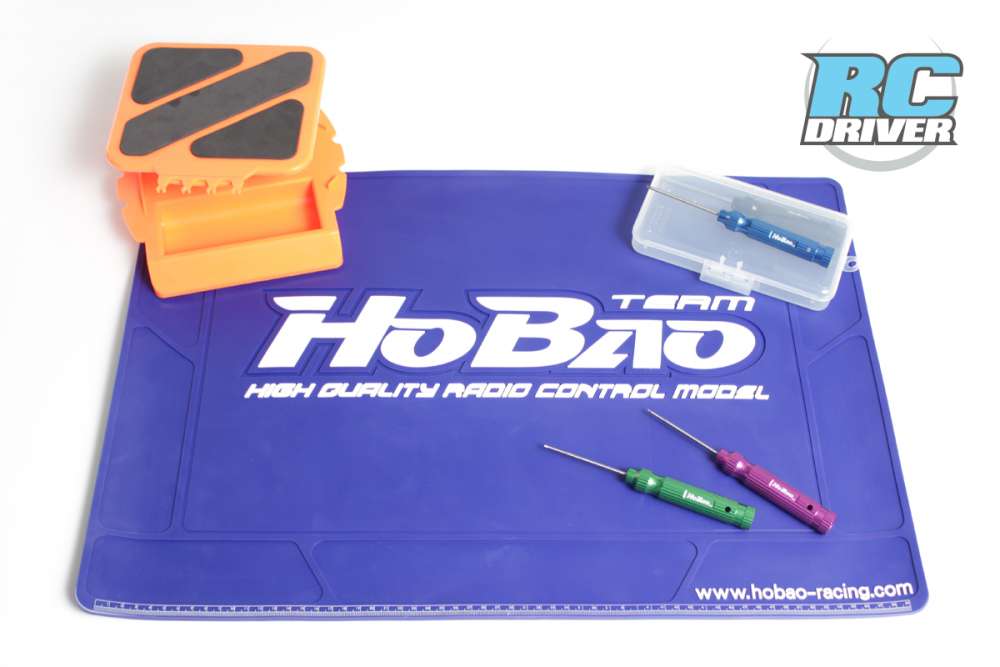 Cursing the fact that he can no longer find his 2.5mm, one of Mike’s friends reaches over the clutter and hands him a 2.5mm HoBao hex driver and a miracle of realization comes to him. 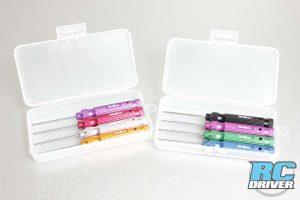 Not only is the HoBao much easier to use than his right angle hex drivers, it makes working on his car a snap. The HoBao drivers have color coded aluminum handles for easy recognition, replaceable blades and a comfortable grip. But wait, there’s more. The handles are hollow so your toolbox won’t gain five pounds when you put them in there, and they have a hole drilled through the handle crosswise so that when you absolutely, positively have to have more torque to break a screw loose, sock it down, or snap the head right off, you can stick another hex wrench through there and make yourself a t handle hex driver. The driver sets also come with a sturdy plastic box to keep them in. Goodbye, ziplocks! Mike immediately fell in love with the wrench, and figured he would buy himself a set.

Impressed with the thoughtful design of the hex wrenches, Mike also got himself a HoBao pit mat, made of thick silicone rubber, to keep his cars from sliding into his neighbor’s territory and keep his screws from travelling quite so far when they drop. Complete with a metric ruler along the bottom edge and the rich smell of 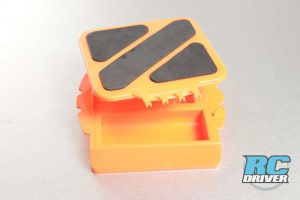 new tires still lingering on it, the pit mat helps Mike contain his mess and keeps him from ruining the bench underneath. It is thick, but it is not a cutting board, as Mike found out one night while lopping the burrs off some a-arms with a meat cleaver on the dining room table. Careful how you swing that thing, buddy. But Mike would not stop there. HoBao also offers a car stand, available in a wide variety of bright colors. The foam rubber pad on top holds Mike’s ride securely and a spindle attaching the top platform to the base allows the stand to spin all the way around, so you never have to worry about floppy suspension bits catching parts and small children while dragging it across the bench. A removable perch for your shocks holds them upright and secure while you bleed them, and a depression in the base allows you to put tiny parts like screws and ball diff bearings in a secure place so they will never end up disappearing in a puddle of cherry coke. The stand also folds up flat for easy storage.

The next time Mike went to the track, his track mates didn’t even realize that he was there. Without all the cursing or a circumference of tiny parts marking his location, his presence went mostly unnoticed. His friends remarked on his peaceful state, commented on his organized appearance, and mentioned that it was nice to see him so calm. So if there are days that you feel a bit like Mike, when things just will not go right, and the perfect tool is just a figment of your imagination, why not invest a little in your sanity? Toss those right angle hex drivers, get rid of the battered piece of cardboard that does nothing anyway, and get yourself some tools that are worth wrenching with.