Today we are lucky enough to have every type of RC vehicle available to us. If you can think of a full-size vehicle, chances are there is an RC counterpart for it. Now if you are a scale enthusiast and/or like having wicked cool RC vehicles, there is one such type that may not have come up on your radar and that is an RC tank. One company in particular that is arguably the best at creating ultra-realistic RC versions of these heavy metal machines is Tamiya. Tamiya has a long history of making RC tanks with their first coming out in the mid 70’s, the M4 Sherman. The tanks have come a long way since then where today’s Tamiya tanks are available as Full Option kits meaning not only are they incredibly accurate in their scale detail, but also offer authentic sound and light systems that bring these RC vehicles to an entirely new level. Tamiya offers many types and scales of RC tanks from 1/35 up to 1/16-scale and here we will focus on just the largest scale they offer…the incredible 1/16-scale Full Option RC tanks.

Since Tamiya is behind the creation of these tanks, you will find that each and every one is an accurate and faithful reproduction of the real thing—the scale realism is just outstanding. ABS plastic is used for the bodies of the tanks which is the perfect substance to achieve exacting detail. With a close look you will find intricate details like panel lines in the armor, the Zimmerit armor coating found on some of the German tanks, latches, hinges, tow hooks along with ammo boxes, jerry cans, tool boxes, spare track, wheels and even tow cables. The main gun barrel is one of the parts on the body that is not made of ABS and is actually turned aluminum.

Underneath the tank bodies is a tough aluminum chassis that provides a sturdy base. In order to handle on and off road terrain, the tanks are fitted with metal torsion bars and suspension arms designed to absorb uneven surfaces just as a full size tank would.

As a means to propel the tanks, Tamiya uses two 380 size brushed motors or in the case of the US M1A2 Abrams and Leopard 2 A6, two 540 brushed motors are utilized. The motors work in unison or independently which allows the tank forward/reverse running and pivot turning which lets the tank turn in place. The wide tracks coupled with the suspension system and dual motor gearboxes provide outstanding maneuverability. 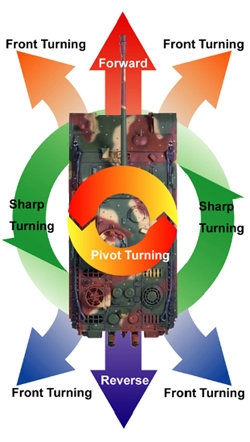 Other movements that can be performed by the tanks is the rotation of the turret as well as elevation of the main gun.

Here is what makes Tamiya’s Full Option tanks truly special. Included with each of the Full Option tanks is a DMD Control Unit and DMD Multi-Function Unit with speaker box that links the tank’s actions with realistic sounds. For example, authentic engine sounds like engine start up, acceleration and idle, engine shut down, turret rotation sounds, gun sounds-main and machine gun fire sounds and track related sound effects. A really cool thing is that Tamiya did not take the easy route and give all their tanks generic sounds, but rather the genuine sounds for each tank. Tamiya designers traveled to museums and other locations around the world to record the actual engines of the tanks so that the sound is 100-percent authentic in the RC version. Even going so far as to recording the metallic clanking of the tank tracks. Furthermore, when the main gun fires or the machine gun, a LED flashes in the barrel to resemble a muzzle flash and it is linked to the appropriate firing sound for greater realism.

As previously mentioned, Tamiya has been manufacturing the 1/16-scale tanks for many years including the ones that are the full option kits so there will be some slight variations from tank to tank including the size of the included motors, gearboxes as well as the sound systems. 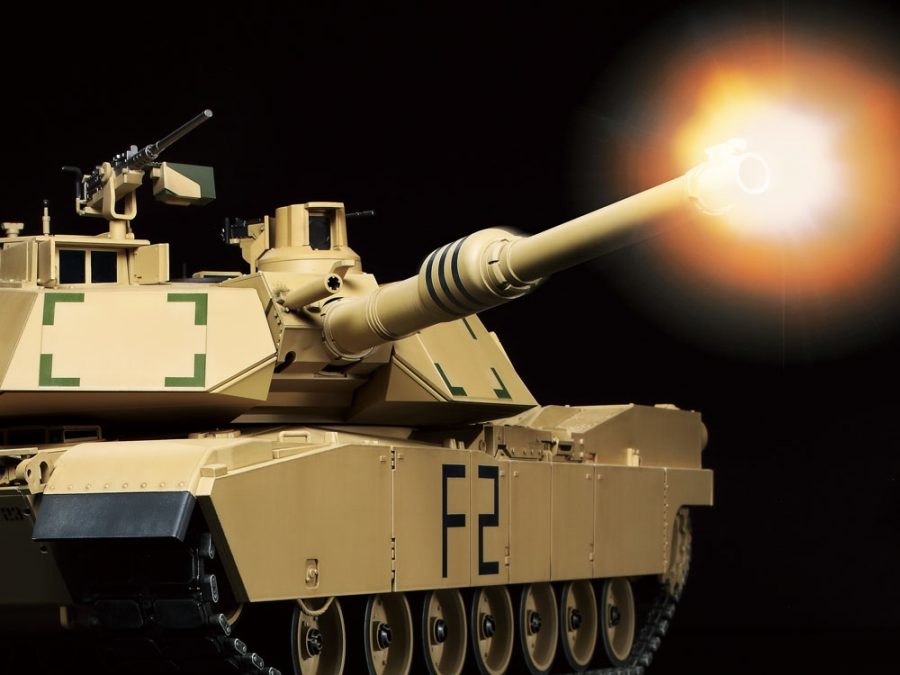 To imitate the firing of the main gun a LED flashes in the muzzle while its own recoil motor retracts the barrel and then returns it to its resting position. This action is also linked to the gearbox to accurately reproduce hull recoil movement. Both actions happen simultaneously to complete the overall firing effect.

The tanks are sold as kits which require assembly and painting. Modeling and RC experience is definitely recommended as these tanks are intended for the intermediate to the advanced modeler. Thankfully, Tamiya’s instruction manuals are second to none and will clearly guide you through the entire assembly process. With that said, Tamiya has completed some of the work for you with the gearboxes and the tracks coming out of the box preassembled.

Keep in mind as you check out the selection of tanks in the Tamiya 1/16-scale line-up, you will discover that there are a few that are offered as display only versions and do not include RC components. Namely the German Panzerjager “Jagdpanther”, the JGSDF (Japan Ground Self Defense Force) Type 10 and the US main battle tank M1A2 Abrams. Since these models are based on Tamiya’s RC versions, they have realistic suspension systems that allows for movement, tough aluminum chassis and other metal parts like drive sprockets and idler wheels. Tamiya also offers a motorized plastic static model of the Panzerkampfwagen IV Ausf.J in 1/16-scale. It comes with a single motor and is powered by two C-size batteries.

What makes this system extra special is that it is not just a simple ‘laser tag’ type setup where one tank shoots a beam of light at another tank and it registers a hit, but rather it offers a wide range of sound effects and actions. Like damage blast sounds, engine trouble sound, loss of speed, blast reaction, limited operation state and lastly inoperative state. There are three tank classes to select on the Battle System, either light, medium or heavy. Depending which tank class you select will determine the number of blasts your tank can endure, the interval between firing and invulnerability time so that you can perform some evasive maneuvering before being reengaged by your opponent. The Battle System has an impressive maximum range of 30m (98 feet) for spacious tank-to-tank battling. Tamiya has designed the Battle System to stay true to the laws of physics where hits received diagonally will harmlessly deflect off the armor plating of the tank unless the tanks are within 5m of each other and then the hit will register. Outside of 5m meters, only shots taken at right angles (front, side, or rear) will be effective. 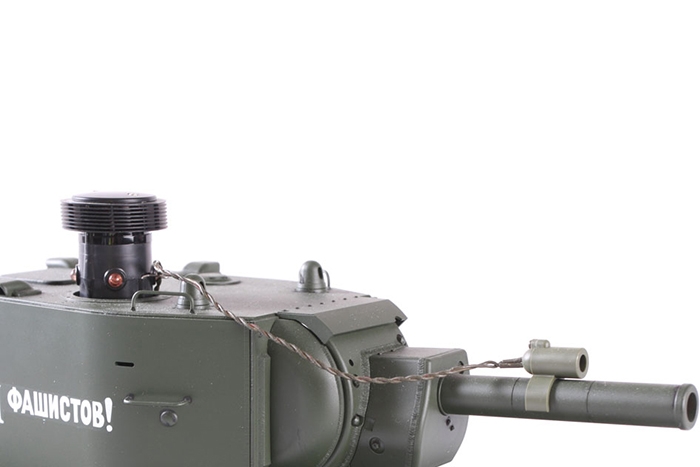 Here is an example of how the Battle System works. When your tank is hit, you will hear a damage blast sound and see your tank shake with the blast reaction effect and the GFS will flash to indicate a hit while making the sound and speed of your motor slow down. Not only that but right after the hit, your tank temporarily loses its ability to fire back since it was ‘shaken-up’ by the impact. As mentioned earlier, depending on the class tank you selected, your tank can only withstand a certain number of hits. When it reaches that number there will be an explosion sound with the GFS flashing intensely. The tank will make two final lurches forward before the engine shuts down and all tank control is lost. After a 15 second down time, the tank function will return signified by the engine start-up sound.

Here is a list of the Tamiya Full Option 1/16-scale tanks that are currently being offered on the Tamiya website. There are some other tanks that have been produced by Tamiya and they could be found out your local hobby shop.
German Panther Type G
German PZKW IV
Jagdpanzer IV/70(V) Lang
JGSDF Type 10
King Tiger Production Turret
Leopard 2 A6
M4 Sherman 105MM Howitzer
Russian Heavy Tank JS-2
Russian Heavy Tank KV-1
Super Sherman
Tiger I
US M1A2 Abrams
US M26 Pershing T26E3