RPM announces the release of its front bumper & skid plate for the Losi Rock Rey and it is more than just a simple skid plate revamp. RPM moved the entire skid plate from between the chassis plate and differential to below the aluminum chassis plate. This move solved a couple of problems. First, the aluminum chassis plate now has some serious PRM skid protection where it had none before. Next, and more importantly, it allowed RPM’s designers the freedom to create a flex zone on the skid plate that would allow more movement of the bumper in impact situations, ultimately saving you from costly internal repairs. 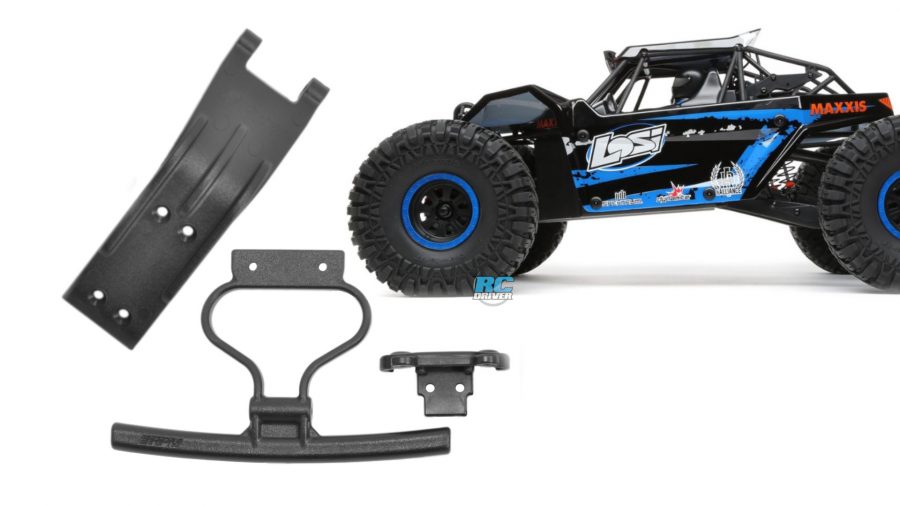 One more trick feature RPM designed in are three skid ribs that help strengthen the front of the skid plate and makes transitions over tall obstacles a breeze. Couple that with the much more rounded transition zone up front and obstacles that would have typically stopped you dead in your tracks now slip smoothly and easily under your truck.

The skid plate isn’t the only place where they looked to improve strength and durability. RPM designed a bumper that actually protects the front of the Rock Rey, yet clears those massive tires during hard cornering. They incorporated another flex zone here that allows the bumper to compress under extreme impacts, yet return back to its original shape once the impact energy has dissipated. This ability to compress also protects the more fragile areas of the truck such as the front differential and chassis plate since the bumper now absorbs the impact instead of transferring that energy into the chassis.

The RPM front bumper for the Losi Rock Rey is designed and produced in the USA and built from RPM’s nearly indestructible blend of engineering grade nylons. Protect your ride with the RPM muscle you deserve.