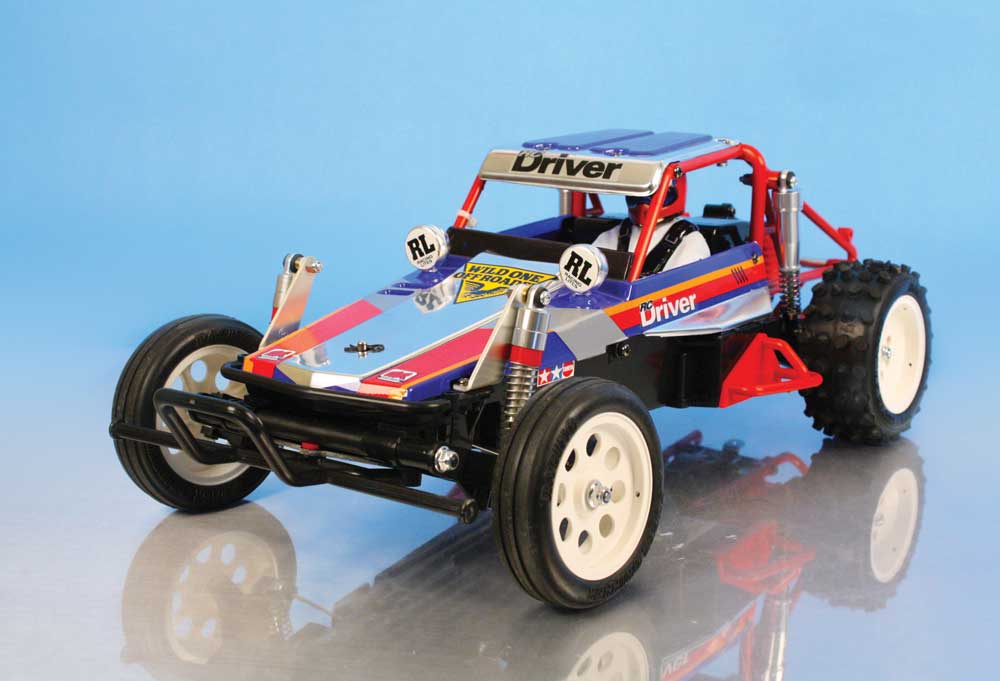 So many of us who became addicted to this hobby in the 80’s, did so because of a Tamiya vehicle. Mine was the Monster Beetle, but I know several others who got hooked on the Tamiya Wild One. The buggy was sold as a kit. For you young ones, that means you had to assemble the bags of parts and hardware before you could drive the buggy. That, however, was always one of the best parts of a Tamiya vehicle. Their instructions were easy to follow, making the build nearly as fun as actually driving the final car. Previous Wild One owners can now relive that moment when they opened the box that featured some of the industry’s best product artwork. Break out your allen wrenches and Phillips screwdriver because the Wild One is back! 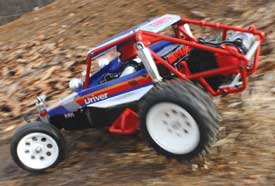 The Wild One is a kit. The parts are all grouped and marked for easy assembly, guided by Tamiya’s well-illustrated manual. It can be completed in a weekend if this is your first kit. One who has built models before can finish it on Saturday and drive it Sunday. The kit uses mostly Phillips head screws and goes together rather easily.

The Wild One uses a tub style chassis, which was common with Tamiya vehicles. It keeps all the inner workings covered and protected from dirt and debris. The battery is installed from the bottom and is held in place with a carbon fiber plate and small body clip. The receiver and speed control are held in place with servo tape. The large front bumper has enough flex in it to prevent damage for collisions with stationary objects or other RC vehicles.

Trailing arm suspension is used front and rear. The upper front shock mounts are made from aluminum and the rear shocks mount to the plastic cage. The shocks feature aluminum bodies. While the front shocks are muck like what we are used to, the rear is a bit different in that the spring is contained below the shock body. The bodies are filled with oil for damping.

A nice thing about these smaller, lightweight cars is that a standard servo works well for steering. Since one is not included it makes it easier to buy one. The linkages run from the steering knuckles directly to the servo-mounted servo saver.

The rear gearbox requires complete assembly. The gear shafts spin on brass bushings. I would suggest installing bearings right out of the gate.

A Tamiya speed control is included this time around. The original used a wiper type mechanical controller that was not all that efficient and had to use a ceramic cooling element. The new ESC makes for a much tidier installation.

The rear knobby tires and front ribbed tires are firm rubber and have no foams. No glue is needed when the buggy is run in its stock form. Bearings are included for the wheels… a big plus.

The driveline consist of dogbones from the tranny to the wheels. The original used hex style bones that had a tendency to wear out so this is a necessary upgrade. Rubber boots protect the bones and just look cool.

A Lexan body set requires trimming and painting. It consists of a main body and a roof panel. Decals provided in the box make it as simple painting the panels a single color. Using black would produce the box art body. I went with blue on the inside and chrome on the outside in some areas. The driver needs painting also. This piece could require more effort. The driver’s helmet/head is molded in ABS plastic. Helmet decals are also included. The face requires paint if you want any detail on it.

The Original Wild One was released when technology was nowhere near what it is today. It was a kit aimed at the novice. This newest version, while utilizing today’s electronics, is still aimed at the beginner. Using a 2400mAh NiMH battery pack, I trekked over to the ball field across from the local hobby shop to make use of the parking lot and the dirt on the field. The 540 motor is not going to set any speed records, but with the updated speed control it provides very smooth operation, especially on the pavement. The turning radius is fairly tight and the chances of flipping the buggy over on a turn are slim, though not impossible. The oil damped shocks let the chassis lean safely into the turns. Onto the dirt piles the rear knobbies bite well and carry the Wild One through the bumps and loose dirt. It takes a good run up, but it is possible to get some air between the chassis and the ground and the shocks cushion the landing. Grass was a bit of a struggle. There simply wasn’t enough torque to quickly move it through any, but the shortest grass. I noticed slowing after about nine minutes and by 13 minutes it would only move on the pavement before the battery died completely.

THE LAST WORD
Tamiya kits have been a long time favorite of mine. Whether for beginner or expert I can get enjoyment from building one of these kits. The Wild One is no exception. It is a simple enough kit for the novice and its performance is ideal for those just getting into the hobby. I do believe, however, that many experienced RC drivers will be picking up one because they got started in the hobby with one many years ago. Perhaps 25 years from now a whole new group of experienced drivers will be picking up 2037 release of the Wild One, version 3 because it got them started in 2013. 