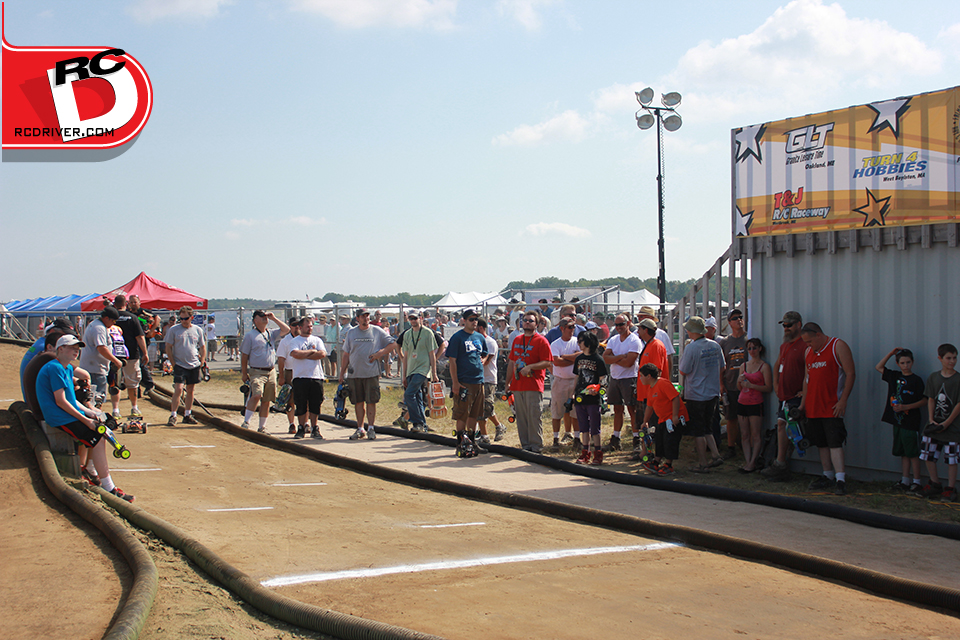 Two years ago, one of the biggest RC events ever came to the Northeast, Sanford, Maine, to be exact. It was the Horizon Hobby US Air Meet. This event was primarily focused on RC airplanes as the title suggested but with Horizon’s influence they also included surface events and exhibitions. The event was a massive success, drawing in a crowd that packed a large portion of an airfield and gridlocked the town with traffic. Fast forward to now and the 2014 US Air Meet was back in a big way with the RC race portion deemed the North East Off-Road Championship. Ray Labonte of Ray and Robin’s Hobby Center has been organizing the Maine Jet Rally at this location for years and headed up the air side again for this successful event. On the surface side, Ray partnered up with Heath Jackson of Maximus Hobby to handle the surface duties. Together this duo planned and executed another memorable weekend in RC along with primary sponsorship from Horizon Hobby.
The Maximus crew started working on the track a month prior to the event bringing in truck load after truck load of clay to 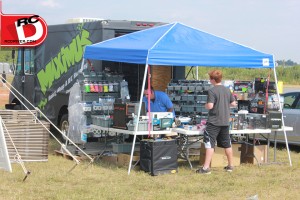 build the track. But the week before the event is when everything went into overdrive. The surface was flattened, the pipes were laid down and rock filled the infield for drainage and then turf sprayed for a cool finished look. The track was top notch and very fun to drive, just a little tight for those running 1/8-scale buggies. Outside of the track, a massive tent was set up for drivers to pit under and one end served as a hobby shop where show attendees could come and buy anything from a battery to a Losi 5IVE at a great price. But to man the shop, Heath did something out of the ordinary, he invited other Northeast shop owners to come in and help out at the event, all while promoting their shops and tracks. Chris Marcy from RC Madness and Todd Anderson from RC Excitement were on hand helping out all around. This comradery between shop owners was a model example of how shops and tracks within a region can get together to help each other out, promote their venues and all benefit by reaching new and established racers, enthusiasts and customers.
Now let’s talk about the racing event. Racers started coming in and checking out the scene on Thursday, but Friday is when 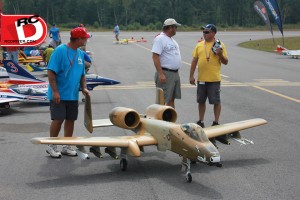 practice and the fun started. Racers set up and dialed in their machines in all the popular 1/10 off-road classes as well as 1/8 nitro and electric buggy. The track held together well and racers were pumped with the fun factor of the layout. On Saturday the event excitement ramped up, the pits were full and tents and trailers filled the outskirts of the track. There were 17 race heats and everybody hit the track for two rounds of qualifying. On the other end of the field, attendees filled the parking lots and filed in through the front gate to see the show. The air show was amazing with RC jets costing tens of thousands of dollars screaming back and forth in the sky. There was a helicopter area for demonstrations and behind the track some control line flyers were performing tricks. Rockets flew into the air, the AMA had flight simulators set up and there were a number of food trailers with good stuff to eat. There was so much to see and do; it was worth the trip to Maine just to walk the show.
Sunday brought on one last chance qualifier for all of the classes, plus one additional class; the Kids Camp Class. This summer 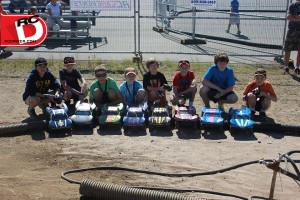 Maximus Hobby held several kids camps where kids came in, built RC cars, learned how they work and how to drive them. A group of kids from the camp arrived Sunday for their own heat race and the pit tent emptied out and surrounded the track to cheer on this new group of RC enthusiasts. There were lots of crashes, but more than double the normal amount of marshals volunteered to help out the race. There was also some great driving by the new participants and it set the stage for an exciting main later in the day. Team Losi Racing’s Dustin Evans was on hand and took the TQ win in the 2WD, 4WD buggy and 2WD SC classes. Over in the 1/8 E-Buggy Class, Carl Doran took first and Mark Smyka took the win in Nitro. Instead of old bowling trophies, drivers were given bottles filled with Maine beach sand wrapped in graphics from the event. Another neat twist to an event filled with excitement.
WRAP UP
After spending four full days at the Air Meet/NEOC, I was sad to leave. Everyone I spoke to had an amazing time and it was all thanks to a crew of people who are very passionate about the hobby. When I talked with the event organizers, I learned they want to continually improve the event and make it more of a destination for the entire family. Judging by this weekend’s turn-out, they are on the right track and RC Driver will be right there to continue to support this event. See you there at the next Air Meet/ New England Off-Road Championship!