Navigating a high speed touring car track and competing against numerous other high-end cars can be a rush. Today’s touring cars are insanely fast and can handle like a Formula 1 car. Part of the performance increase can be directly attributed to the body being used. If you need that added edge over your TC competition, then be sure to check out the 10 race-winning touring car bodies from PROTOform that will fit your 190mm touring car chassis. They offer a nice variety that will not only aid in on-track handling when at speed and in the corners, but will also give your prized TC ride some serious style points. 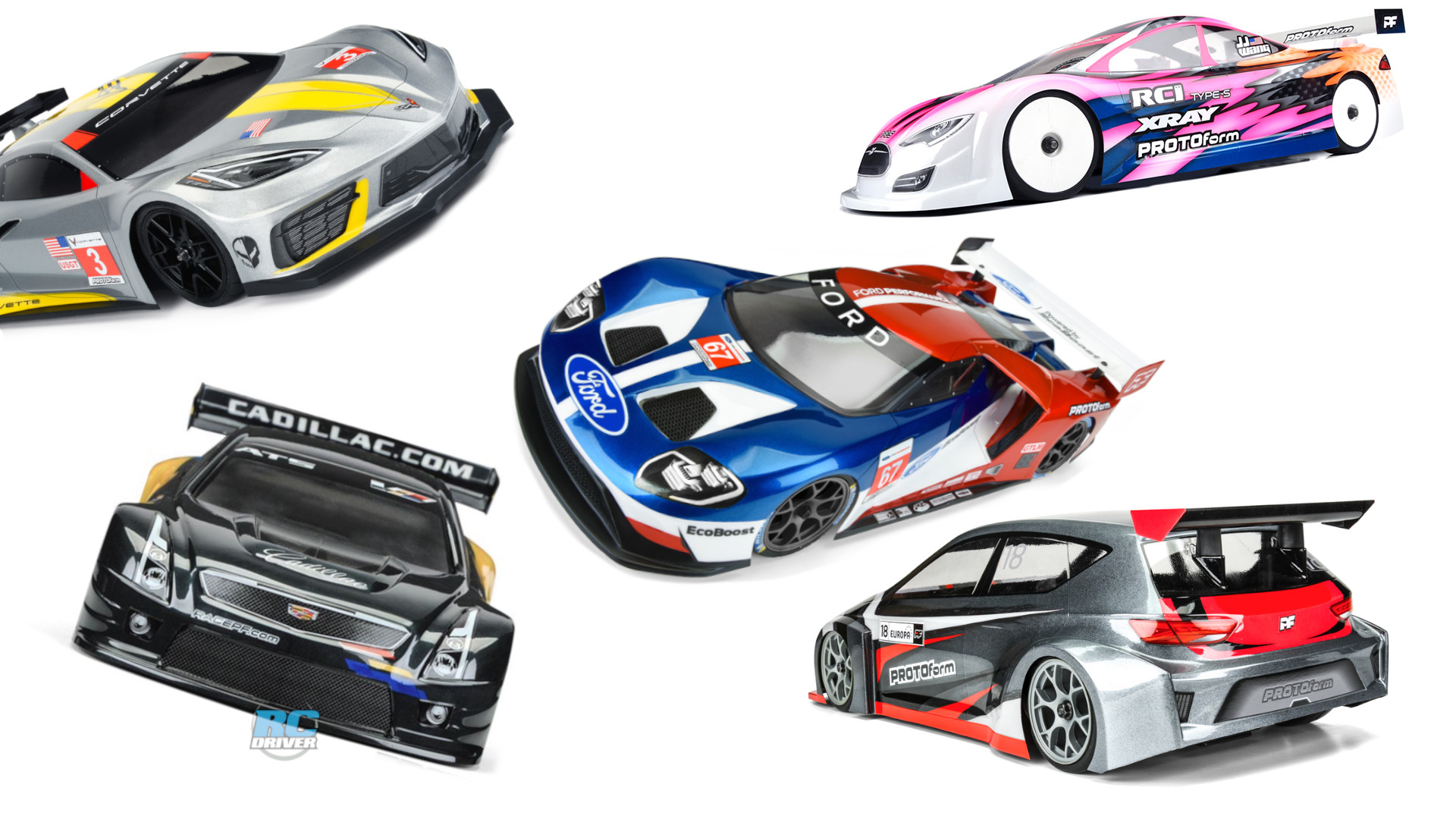 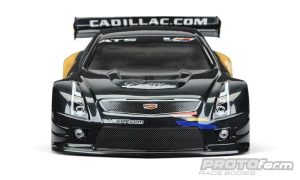 In the early 2000s, Cadillac developed and raced the awesome looking Cadillac CTS race car. Then fast forward to 2015 and they came out with their factory works ATS-V.R. This third generation of the V-series of race cars was built to international FIA and GT3 specs. This opened the door so that it could compete in more than thirty different GT series around the world. In the World Challenge series, the ATS-V.R has enjoyed multiple overall wins and pole positions with top drivers Johnny O-Connell and Andy Pilgrim at the wheel.

Thanks to PROTOform you can enjoy the success of the full-size ATS-V.R in 1/10-scale with this officially licensed clear body. With all the details accounted for and extensive sticker sheet, you can replicate a very realistic looking ATS-V.R thus compete in classes such as the USGT, GT10 and Spec Grand Touring. Genuine .030-inch polycarbonate is used to mold the body which includes the injection molded wing struts that will support the unique rear wing design. What makes this wing special is that it can be setup in two different variations. A 10mm vertical section for sanctioned USGT racing and a 20mm upper lad-back trim for club racing. The hardware is included to mount up the wing and overspray film comes on the body to help ensure a clean paint job. 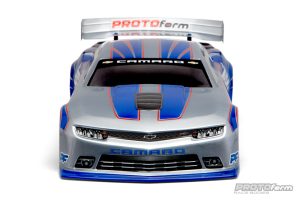 PROTOform likes to keep their finger on the pulse of the racing scene which leads to the development of many racing-winning bodies. For example the PROTOform Chevrolet Camaro ZL1 quickly became the body that everybody was running as it racked up countless IIC, National and Regional race titles. Then when Chevy reengineered their Camaro into a track-ready Z/28, it was an easy decision for PROTOform to use it as the next evolution of their Camaro and created this stunning Chevrolet Camaro Z/28 clear body.

This officially licensed Camaro Z/28 body was refined just like what Chevy did to the full size Camaro. PROTOform lowered its stance, gave it an enlarged front splitter, a signature silver “Flow-tie” grill emblem and integrated decklid spoiler all to enhance the aero performance and overall aesthetic style. Along with window masks, detail sticker sheet and overspray film the Camaro Z/28 body comes with s add-on rear wing that can be mounted on the dual injection molded struts and attached with included mounting hardware. 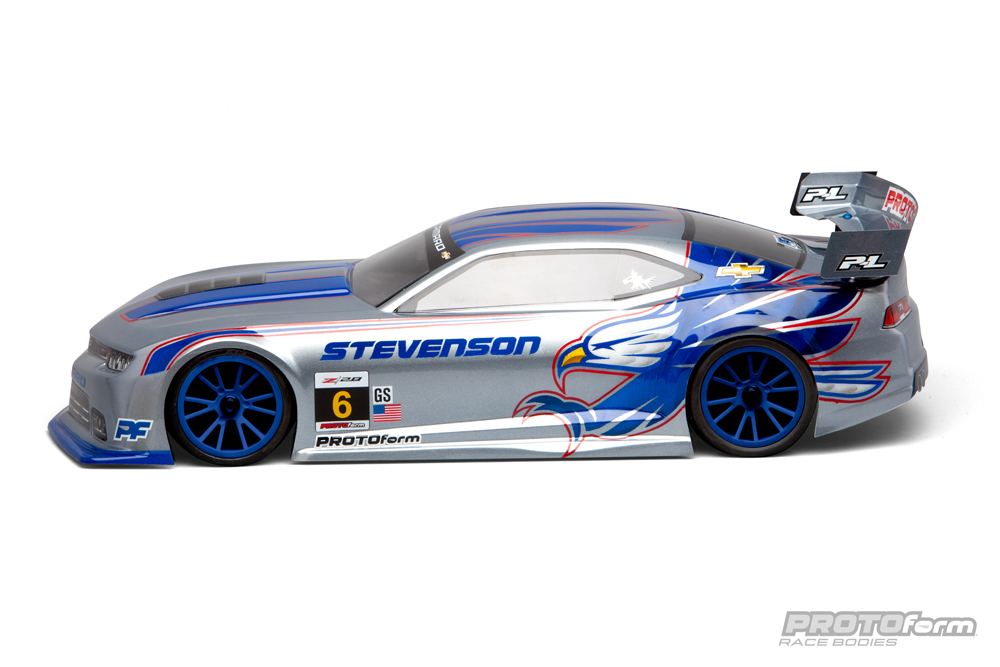 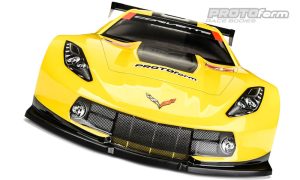 The Chevrolet Corvette has been super popular ever since its release back in the 50’s and has made the race track its home. Here PROTOform created the Corvette C7.R touring car body to pay homage to the super successful full-size C7.R. It captured the triple-crown of GTLM-class endurance racing with wins at the famed 24 Hours of Le Mans, 24 Hours of Daytona and the 12 Hours of Sebring.

Corvette Racing’s championship heritage is brought to the USGT class with this PROTOform Chevrolet Corvette C7.R clear body. PROTOform did it right and got it officially licensed and gave it its signature muscular stance, swept-back roofline, big front splitter and side vents. This allows you to replicate the race-winning 1:1 C7.R for 190mm 1/10-scale touring car. The body comes with the USGT sanctioned wing with nylon wings struts and mounting hardware. When you look over the included sticker sheet you will see that it is quite extensive and features the Corvette branded windshield headers, “Jake” skull hood logo, number plates, and USA flags. 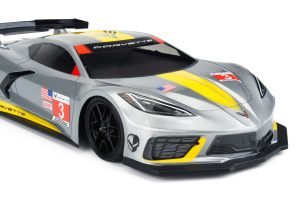 Following the release of the Corvette C7.R was a completely reinvented Corvette, the C8. This all-new super-car features a mid-engine layout and killer looking new body design. PROTOform knew as soon as rumors surfaced that it would be their next USGT body.

It turns out that the PROTOform Chevrolet Corvette C8 officially licensed body is perfectly suited for the USGT class of racing. All the exceptional details of the 1:1 counterpart including aggressive cab forward design, striking front splitter, and sculpted side doors and vents are captured using the latest in 3D CAD and 5-axis milling tech. Once you lay down the paint scheme of your choice and apply the detailed stickers, this body will truly come to life. The details molded into the body really come out in the high-quality polycarbonate that PROTOform uses. Along with the body is overspray film, window masks, rear wing, wing buttons and mounting hardware. 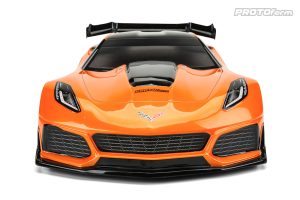 The ZR1 is one mean and extreme Corvette production supercar. Under the hood is a super powerful 755 horse engine that launches this Vette to a top speed of 212mph. With stats like that and the pedigree of Corvette, PROTOform just had to bring it to 1/10-scale and makes a great touring car body.

As you take in the overall detail of the PROTOform Chevrolet Corvette ZR1 clear body, you can quickly surmise that this body is perfectly suited for USGT class TC racing. Officially licensed by General Motors it features a distinctively-shaped high rear wing, oversized front grills with aggressive front splitter resting below. Lighter-weight material is used to create this ZR1 body, thus lowering the center of gravity and making this race body more responsive out on the track. The body includes an add-on rear wing with the USGT-sanctioned 1mm trim height, nylon wing struts and mounting hardware. Most popular touring cars will be able to run the gorgeous Corvette ZR1 body. 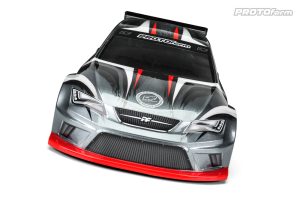 Now for a total change of pace with some European flare…enter the Europa clear body. PROTOform developed and produced this body specifically for the front wheel drive touring cars. Although this body is not directly modeled after a full size car, it clearly has styling cues taken from popular European hatch back cars that compete in the full-scale TCR classes around the globe.

The rear end of the PROTOform Europa features molded in wing platforms that support the add-on nylon wing struts and wing to give it that realistic racing appearance. Moving forward is a slammed hatchback roofline matched up with aggressive fender flares. Again, PROTOform employed the latest in 3D CAD and 5-axis CNC technology to achieve the outstanding symmetry and quality of the surfaces. You can drop the Europa body on any common 190mm touring car chassis. There is also the benefit of a low center of gravity due to the use of PROTOform’s high quality, lightweight polycarbonate. Along with the body there are two wing struts, wing, mounting hardware, detail decal sheet, window masks and paint then peel overspray film. 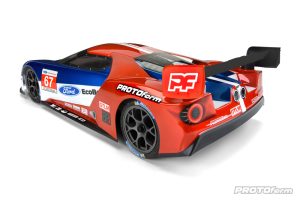 We are suckers for the Ford GT and completely love the 1/10-scale version that PROTOform created. It has that awesome ultra-low stance with teardrop shaped cockpit and cool B-pillar “side wings”. PROTOform accurately captured the look of the full size Ford GT and helped to yield it officially licensed status. Now you can own a 1/10-scale rendition of the GT class winning car that won at the 2016 24 Hours of Le Mans and back to back wins at the 24 Hours of Daytona (2017-2018).

Although the body has an ultra-low body line, extra clearances were built-in so that it can fit over the front and rear shock towers. The rear wing and distinctive side wings are add-on parts that can be attached with the included hardware. If you don’t want the non-scale look of the hardware, you can affix the wings with shoo-goo or high strength double-sided tape. Like the rest of the PROTOform touring car bodies, the Ford GT comes with a sticker sheet, window masks and overspray film. 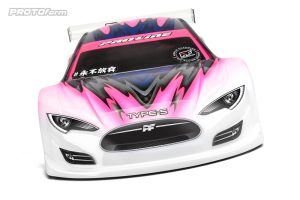 Like the Europa body, these Type-S bodies were created by PROTOform and are not copies of a full-size sedan. The Type-S Light Weight and Type-S PRO-Lite Weight clear bodies are high downforce racing bodies. They are ideal for modified classes or any other track condition and or class where more grip is required. You will find that these bodies offer super precise steering characteristics along with outstanding rear grip, the balance provided is unmatched by any other body on the 190mm electric touring car market. During testing by PROTOform’s team drivers, they discovered the Type-S hand no problem handling multiple racing surface types: ETS carpet, outdoor or indoor asphalt, or high-grip CRC black carpet.

In order to achieve this impressive level of performance, the overall stiffness of the body was addressed. Ridges along the hood, a-pillar and trunk bed provide increased rigidity to create less body tuck and less flex while not sacrificing performance. To assist in body positioning which is a critical body tuning step, PROTOform incorporated mounting marks inside the front wheel arches. Positions for 0, +2mm, +4mm and +6mm are marked.

The two bodies are identical except that the PRO-Lite is approximately 15-percent lighter than the Type-S Light Weight. They are also Global Body Spec compliant and fully EFRA and ROAR approved. 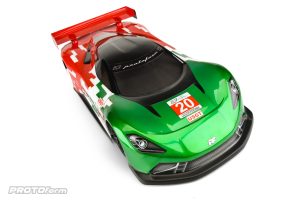 The tenth and final race-winning PROTOform touring car bodies is this Vittoria GT clear body. PROTOform created it for TC racers looking to compete in the scale-spec style classes such as USGT, GT10 or Spec Grand Touring. You can tell that the inspiration of the Vittoria was derived from the wave of hot Italian supercars that have been recently released. It has a low-CG cab forward design that not only looks great but will surely give exceptional handling characteristics out on the track. For USGT sanctioned races that require a lower wing position or for club racing where extra downforce is needed, PROTOform gives you two trimlines to get the wing in the proper position.

High-quality .030-inch polycarbonate is used to mold the Vittoria GT and is fully approved for competition by the USGT rules. To complete the body, PROTOform provides very helpful window masks and overspray film. Once it is painted, you can finish it off with the extensive decal sheet that includes windshield headers and number plates. Just combine the Vittoria body with your race-level 190mm touring car and you will have one hard to beat combo.

Want to see everything PROTOform has to offer? Click HERE!

SHOP PRO-LINE RACING
Use code RCDRIVER10 to save 10% your order at https://www.prolineracing.com/

*Notice: Some of our articles, videos and descriptions may contain affiliate links, which means that if you click on one of the product links, we may receive a small commission. This helps support the website and social media channels and allows us to continue to produce content. Thank you for the support!