We are suckers for scale realism when RC vehicles have been highly customized to look like a full-scale vehicle. It is not an easy feat and takes a combination of talent and time to achieve. An impressive example of one of these super scale looking vehicles is this must-see Tamiya King Hauler homebuilt tractor trailer that was created by Keith Sheppard. We spoke with Keith and got some info about this awesome build as well as a bunch of photos and a video. 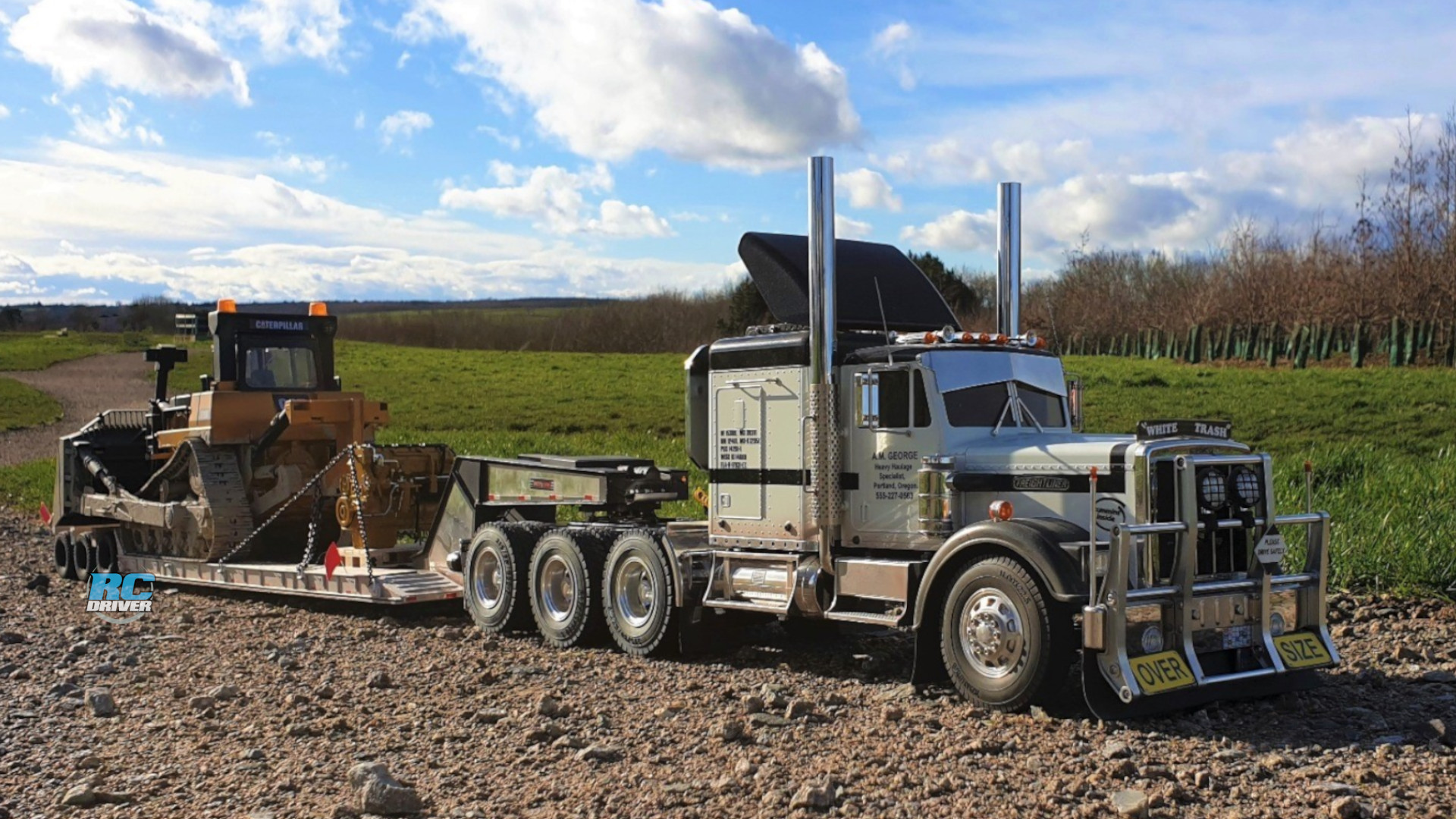 Like many customized vehicles, Keith’s Tamiya King Hauler went through more than one transformation. The build started all the way back in 2010 and included some nice accessories right off the bat. Along with the standard Tamiya King Hauler kit, Keith bought the Tamiya Multi-Function Control Unit for the sounds and action options it provides as well as the, Tamiya roof spoiler, Tamiya animal guard and a chrome sun visor. 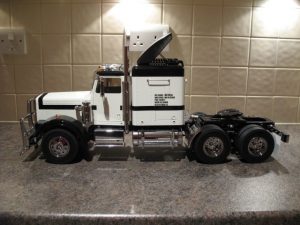 The decision to paint Hauler white was partially made for him. He went with the Glacier White color simply because he had a couple of cans on hand thus helping to keep costs down. The black trim was added to break up all the white and he called it finished. It stayed this way for a couple of years while he built different trailers for it. The current tractor trailer setup came to be when Keith decided that he wanted a lowboy trailer so it could tow one of his RC tanks around. 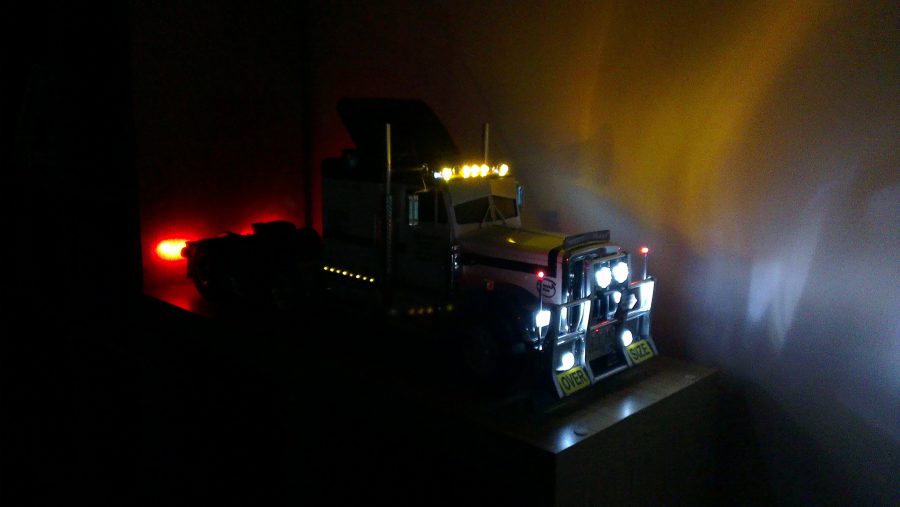 One of the standouts of this build is the lowboy trailer that Keith made from scrap plywood that is then covered with sheets of plasticard along with some aluminum channel down the sides. It has no suspension and runs on wheels and tires harvested off of a Bruder Tri-Axle Low Loader trailer. The gooseneck is manually detachable and the desired look was spot on for what he wanted.

It is all about the small details that helps transform an ordinary RC model into an ultra-realistic RC model. Things like the welds you see on the lowboy trailer were added by Keith using Milliput modelling putty. To create the deck, he used this strips of 3mm plywood which he stained and the rest of the detail was all completed with plasticard. The last steps were to spray the trailer to match the tractor and then add a weathering effect with an airbrush to resemble a working truck.

Once Keith completed the trailer with the weathering, it was at this point when he went back to his King Hauler to make some changes. He told us that he didn’t want a nice shiny show truck like most RC semis and wanted a dirty hard-working truck-look. The biggest change was to add another drive axle to the King Hauler, so he had some custom chassis rails made to extend the trucks length. Then he simply added some standard Tamiya axle and suspension parts to turn the King Hauler into a tough looking three-axle tractor.

Then he swapped out the standard King Hauler rear bumper and lights for a custom setup using the Tamiya Knight Hauler rear lights. Most of the detail was made from scratch like the bug shield, antennas and signs. To create the air lines, Keith cleverly used electrical wire that he wrapped around a pencil to give them the coil look. The rest of the items were sourced from Garden Trucking and eBay. With all the extras added, he then gave both the trailer and the rig a light dusting of dirt through the airbrush to give it that just-come-off-site look.

A 2.4GHz Planet T5 transmitter along with a Planet R6M receiver provides the control for this big rig. Handling the steering duties is a Tower Pro MG-995 high-torque servo with metal gears.

The detachable gooseneck method Keith devised is not accurate to a real one…it’s very basic using a bar that slots into a groove.

One of the last steps for Keith’s King Hauler build was to decide what type of vehicle would call the lowboy its home. So, after he had several different vehicles on the back, he wound up selecting the big Bruder bulldozer as his favorite. There was a problem with the Bruder dozer because it was far too light and did not compress the lowboy enough to allow the front set of trailer tires to touch the ground. To solve this issue, Keith stripped the dozer down and added 26-pounds of lead inside.

Now the trailer sits level and runs smoothly with all of the wheels making contact with the ground. Due to the additional weight, the stock motor needed to be upgraded. Keith scrapped the stock motor and installed an LRP Truck Puller motor which can handle the heavy load. Lastly, he gave the dozer a good dusting with the airbrush and added some Vallejo thick mud paint to give it a used realistic look. Chained down and accompanied by a new CAT engine on a pallet, Keith had achieved the look he was after.

The name on the door, A.M. George, stands for Alfred Malcolm George. He is Keith’s father-in-law who passed away while he was completing the build. George had paid great interest in the build and never got to see it finished so Keith thought it was a nice way to remember him. Now it’s known as Dad’s truck and it will never leave the family for that reason. 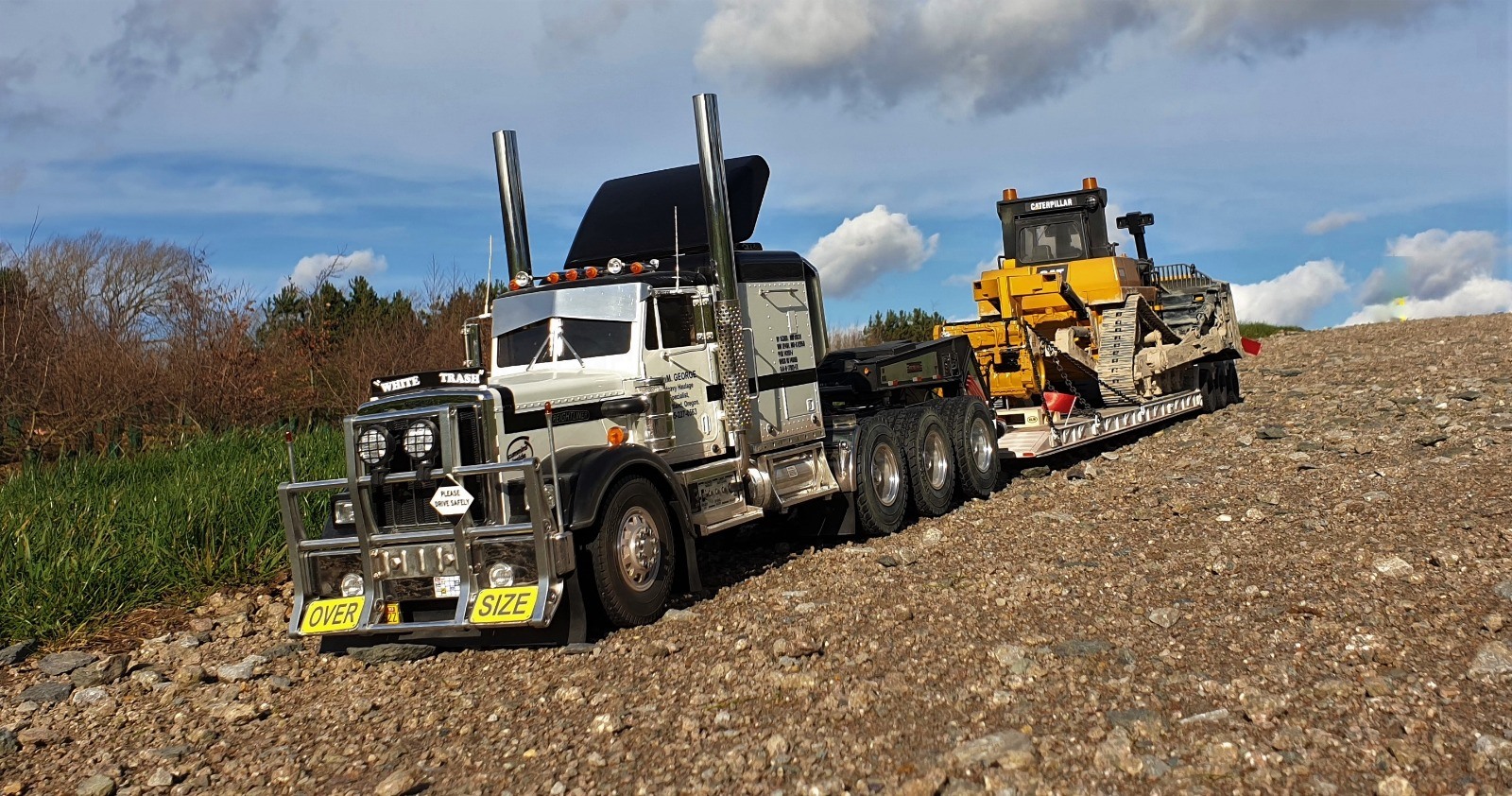 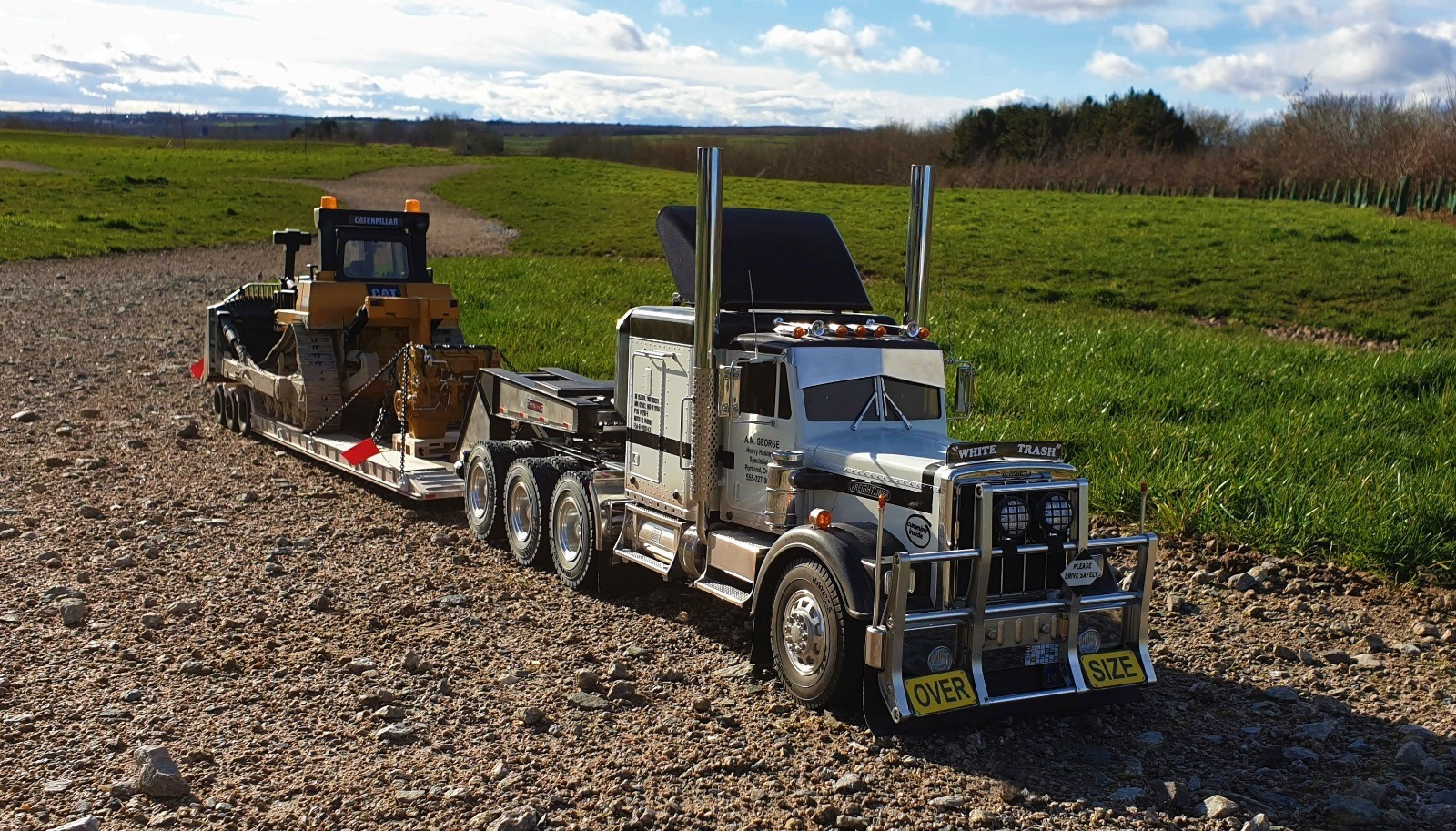 About the builder, Keith Sheppard

Keith first got into radio controlled models back in 1987 when he was just 12-year-old. He had worked the summer at his dad’s workplace to earn money, which he then spent on a 1/12-scale Tamiya Toyota Celica Gr.B Rally Special car kit. He built it with his dad and painted it yellow and green which he thought was cool. The Celica was no shelf queen and he raced it at the local indoor RC club. He tells us that the car was fast with the Technigold motor it came with and that he should have won every race, but he crashed a lot. For Keith, this was great because then he could strip the car down and repair anything broken. He enjoyed the fixing as much as the driving and that was it, he was hooked.

In the following years, Keith had various cars like rally cars, touring cars, monster trucks and they were all Tamiya. Once he was finished with school, he sold all of them and took a break from RC for about 10 years that is until he got into RC tanks and military vehicles. At that point, he joined a local club and started I.R Battling which he had great fun doing. This led him to owning over 20 different models; all 1/16-scale. This is when he learned to airbrush with various camo patterns and war damage was a part of every build. It was at this time he decided to buy his first RC tractor truck, mainly so he could transport one of his tanks around. 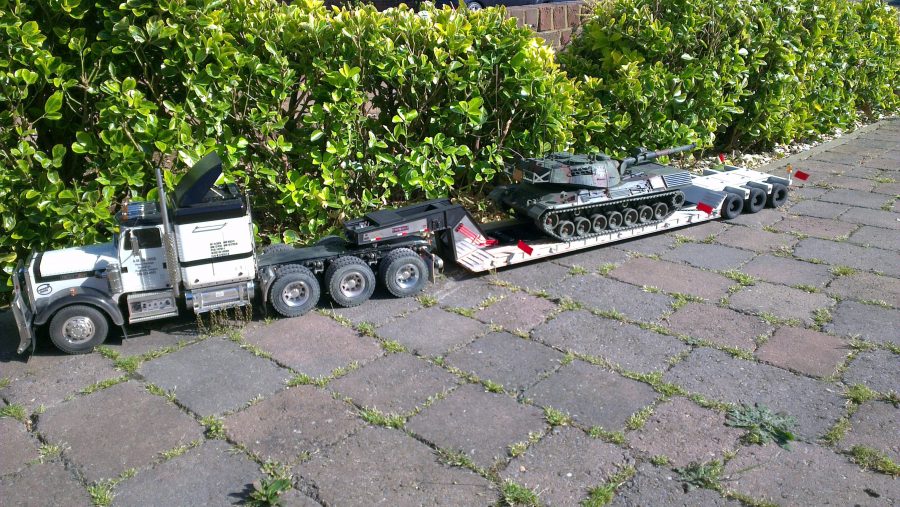 Like what happens to many of us, life got in the way all the tanks and military vehicles were sold. Luckily for us, the truck found its way onto a shelf and it stayed there for a long time. After another break, the lure of crawlers/scalers pulled him back in. It started with the Axial SCX10 Jeep and joining a club where he discovered his love for the challenge of course driving. Now he owns a class 1 crawler, a class 2 crawler and a Yeti Score Trophy Truck. On his bench at the moment is a touring car and he has a rally car sitting in the wings waiting to be assembled. Keith has also added a 3D printer which has given him so many options and has gotten him into really enjoying the hobby again. This time around, he doesn’t plan to sell anything off like he did in the past. 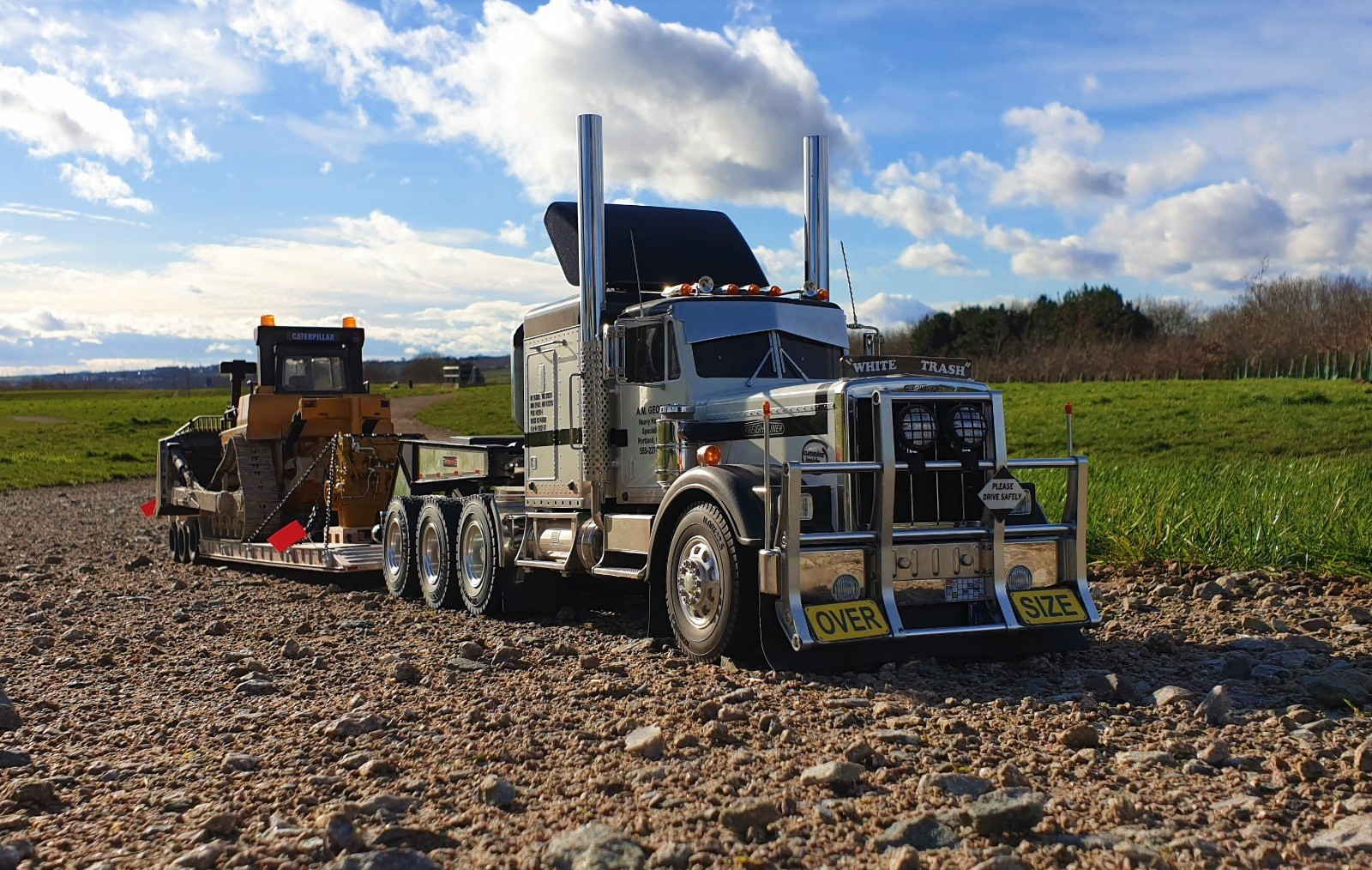 The King Hauler was the first tractor released by Tamiya all the way back in 1993. It is still a popular model and is one that Tamiya continues to produce. The King Hauler exudes what a classic American semi looks like. It is powered by a 540 brushed motor that spins a 3-speed transmission that can be shifted on the fly. Both of the rear axles are driven and are equipped with gear differentials. 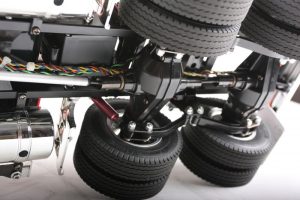 Tamiya uses a realistic suspension setup with friction shocks supported by metal leaf springs. An aluminum c-channel ladder frame acts as the backbone for the chassis. In order to achieve exacting scale realism, the body of the King Hauler is molded from ABS plastic so even rivets are visible. Then Tamiya includes numerous scale accessories to help bring the body to life. There are metal grab rails, side mirror supports and metal dual exhaust stacks. Then there are the chrome plated items like the front grill, fuel tanks, side steps, horns, wipers, visor, wheels, bumpers, light mounts mirrors and tire guards. 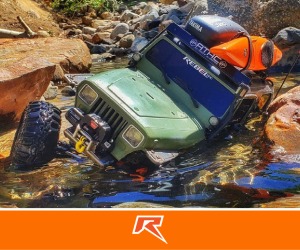