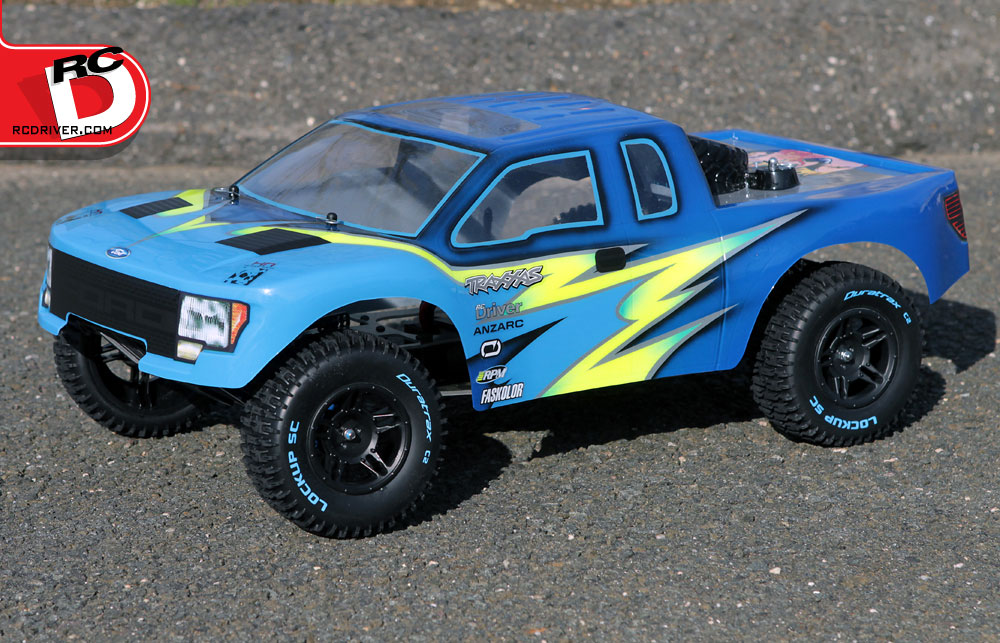 It took about a month to get Project Ugly Truck together in our spare time, but we did it, it’s done and it actually looks pretty cool. When we dug through a bin of parts and pulled out random pieces that would make a complete truck in the end, it didn’t all look pretty piled on the bench. But now Ugly Truck is ready to show off and tear up the ground. 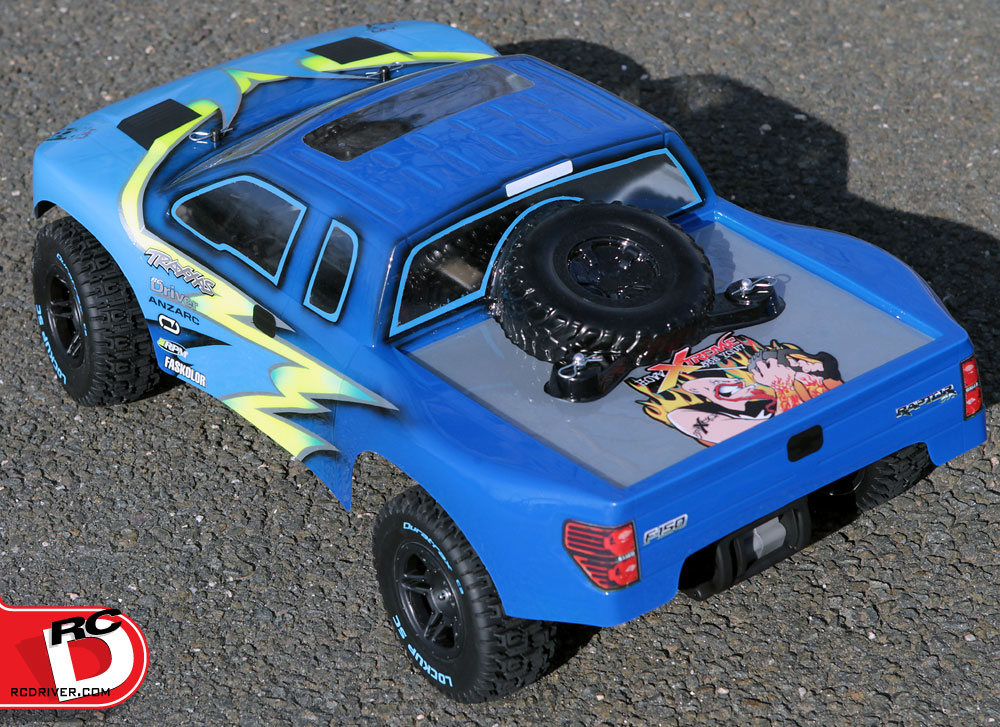 The finishing touches to the truck were simple; an old Parma Raptor body painted by Kustom RC Graphics was mounted to the truck. Since it was a Traxxas Slash-based truck, the body fit perfectly on the body mounts. Unfortunately the Parma Raptor is no longer available, but Parma has plenty of other cool SC bodies to choose from. The wheel and rubber selection comes from Duratrax. Their Lockup SC tire is a great all-terrain play tire; perfect for what’s ahead in this truck’s life. 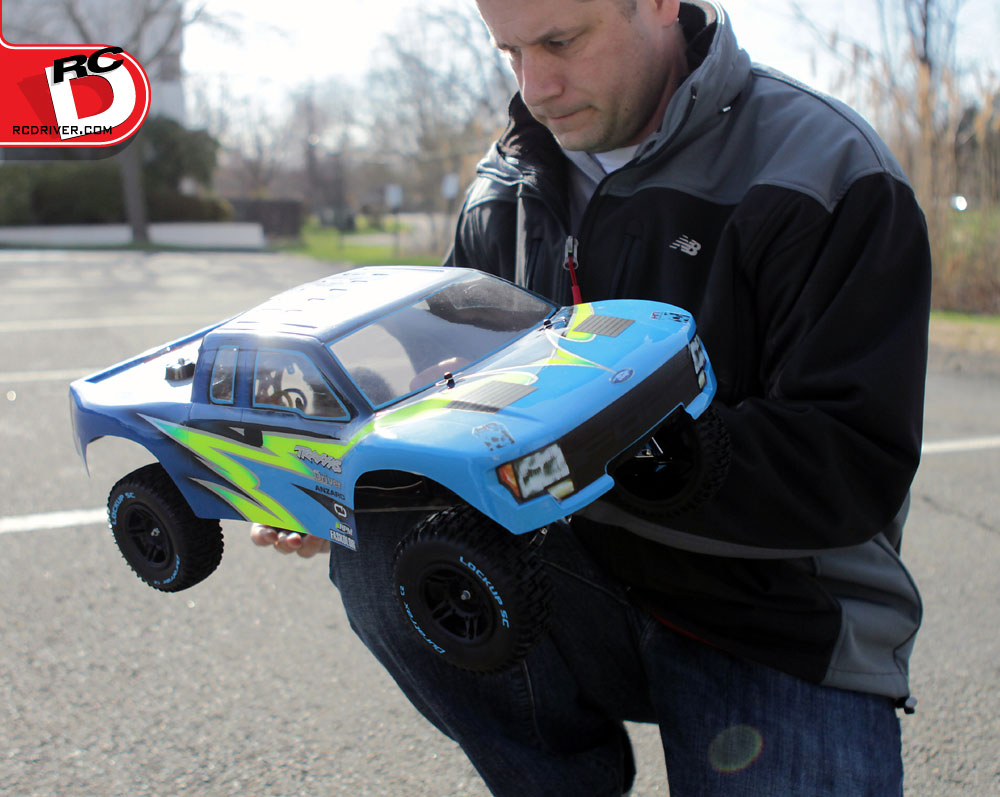 OUT TO PLAY– So it was time to test out Project Ugly truck to see if this random pile of parts would be any fun. An old Losi 2.4GHz radio from an RTR was bound to the receiver and the battery charged up. We headed out in front of our offices to rip the truck around on the grass. We didn’t want to beat it up too much because we’re giving the truck away and didn’t want the new owner to get a bag of beat-up parts in the mail.

The truck is pretty quick in stock form and will pull the wheels off the ground slightly when you punch the throttle. We tore through the grass and popped the truck over some mounds. It jumped well and landed smoothly in the soft grass. Then it was time to test the steering; a few hard cranks of the wheel and it carved a pretty aggressive turn with the grippy tires. This was fun! For the last of our testing, we hit the pavement and zipped the truck around some concrete pillars in our parking garage. The truck is pretty stable on-road and didn’t traction roll. We could tell the truck was a blast, but we hit the switch to off to keep this truck in near pristine condition for one lucky RC driver. 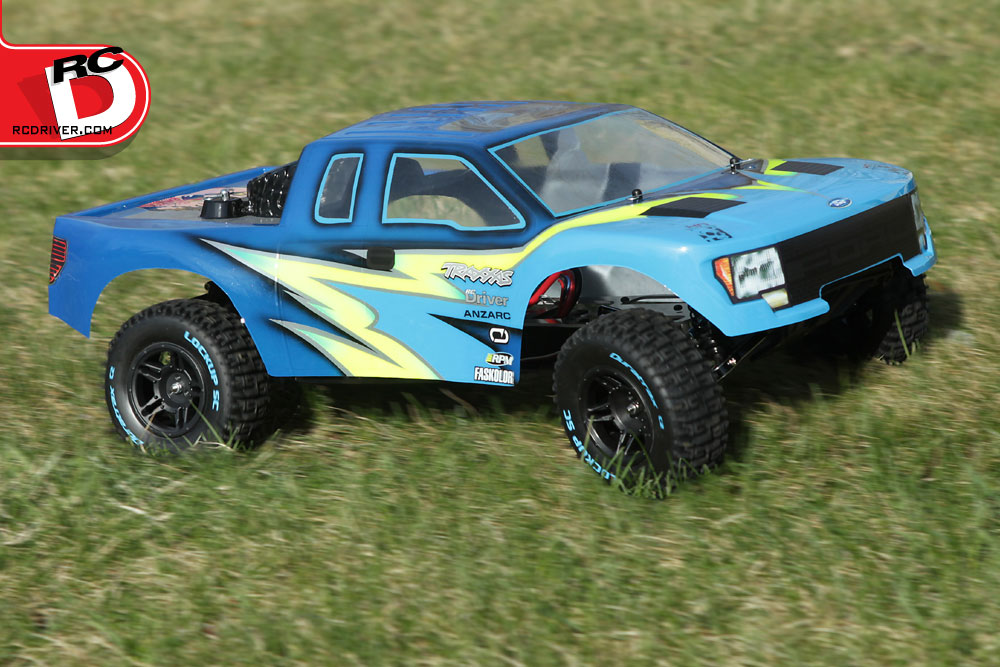 WRAP UP– It was an interesting project. We thought the truck would look less polished when finished, but it looks pretty sweet. Project Ugly Truck grew on us as it lived on our workbench for a month, but we’re more than happy with the result. The truck should dish out plenty of action in its future and hold up to bashing, but one question remains…Who will be the one behind the wheel?

The Ugly Truck give-away on starts Tuesday April 22, 2014, and we’ll leave the entry form open for one month (until May 22, 2014) and then select one winner to own this one-of-a-kind machine. Due to certain rules and regulations we have to follow, the give-away is only open to the locations in the entry below. Thanks for following our Ugly Truck Build!