Build Your Own RC Snow Plow With Axial’s SCX10 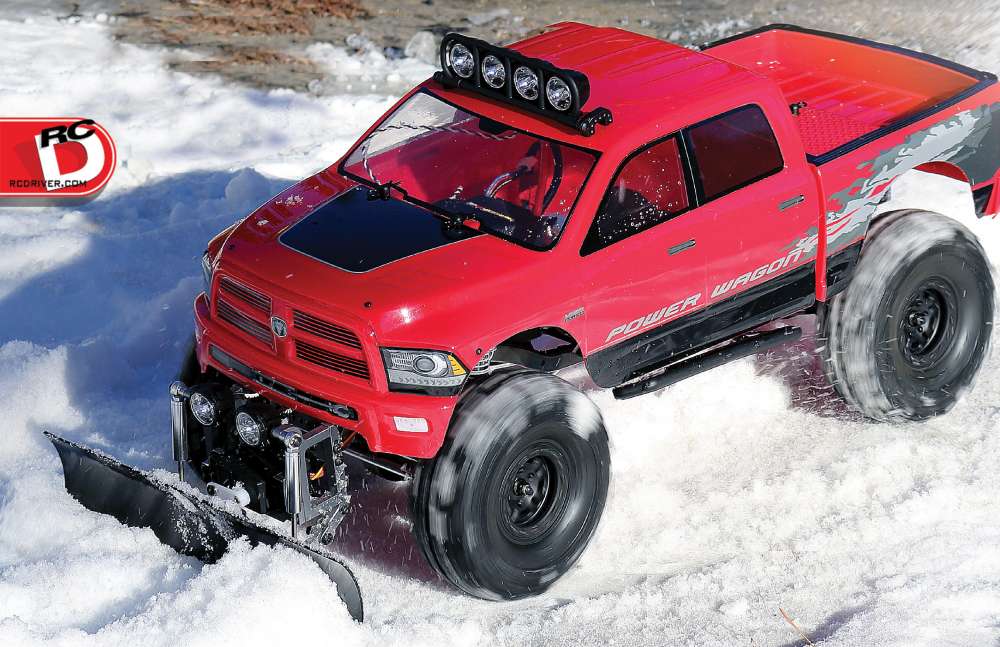 It’s funny how things turn out in life sometimes. For the past 2-½ years, I’ve been a resident of Connecticut, enjoying the warm summers and cold (more like frigid!) winters. I’ve had the pleasure of building many different types of project vehicles, however the one I missed was some type of snow plow. Then the wife and I moved back to California, where any type of precipitation is pretty rare.

In early December, our friend Robin from Connecticut contacted me and asked if there was any chance I could build her a vehicle with a snow plow on it for her husband Chris for Christmas. She said he’s extremely difficult to buy for, but when he watched a video (or two, or 20) online of someone plowing their front yard he was really into it. She thought it would be the perfect gift. So, now that I’m 3,000 miles away from some serious snow, I’m finally getting my chance to build a plow.

CHASSIS
Since this project will eventually end up in the hands of a first-time RCer, I didn’t want to get all crazy and go overboard on the parts list. Robin also mentioned that Chris was into Dodge trucks, so Axial’s SCX10 Ram Power Wagon was the perfect choice to base the project around. I started by swapping out the plastic rear H-Brace and rear bumper mount with silver, aluminum parts from STRC. I also replaced all four plastic shock hoops with STRC aluminum parts, also in high-visibility silver. Just a few, wellplaced bits of silver to brighten up an otherwise all-black chassis.

SUSPENSION
While I’d like to say I didn’t go overboard on the suspension, I did want to increase the look and durability a bit. Off came all of the plastic links, replaced with a full set of silver, STRC aluminum parts. This was a pretty easy swap as STRC supplies all the parts needed to make the conversion. To further the swap, I also replaced the steering links with STRC’s Aluminum Steering Upgrade Kit. This kit replaces the plastic, center-point steering system that comes stock on the SCX10. All the mounting hardware is included as well. Next up, I swapped out the plastic steering knuckles, hub carriers and rear lockouts with STRC aluminum parts. To beef up the rear end a bit, I pulled the plastic rear upper link mount and replaced it with a silver piece as well … yup, you guessed it, also a STRC part. To finish off the suspension, I built up and installed a full set of Axial’s Icon Aluminum Shocks. While these shocks really helped smooth out the ride, the best part was the dual spring setup. It helped keep the chassis from dipping when I pressed the multi-function button to raise the plow. On the stock shocks, the plow-servo would overpower the springs and actually pull the front of the truck down slightly. These dual-spring shocks were just the ticket to help correct that.

DRIVETRAIN
In factory form, the SCX10 is a beast when it comes to normal driving. Fellow editor, Matt Maziarz, has a bone stock Ram Power Wagon that he has beat the bejesus out of … literally. He works mostly on the flight side of Maplegate, so I think he uses the Power Wagon as some sort of therapy. Both Greg and I have been extremely impressed with the durability of Matt’s rig – it, at times, has outperformed our custom SCX10 trucks! That being said, I knew this truck wasn’t going to be seeing anywhere near the abuse that Matt’s truck has, so I felt it was pretty safe to keep the stock drivetrain intact.

ELECTRONICS
As with the drivetrain, I didn’t change anything out in the electronics department either. I did, however, add two things a servo for the snow plow and a full set of lights. The RC4WD plow comes pre-built and ready to install the servo, so I grabbed a Futaba S3001 and bolted it right in. The servo lead wasn’t quite long enough to comfortably reach the receiver in the water resistant box, so I had to use a six-inch servo extension to make it work. Thankfully, the SCX10 now comes with the Tactic TTX300 radio system, a nice three-channel radio setup. This made it easy to use the two multi-function buttons on the grip to easily raise and lower the plow. Should Chris need to plow the driveway at night, I added Pro-Line’s Performance Off- Road Light Bar Set and pieced together some Axial light parts (a two-light LED string, a fourlight LED string and their three-port LED controller). Initially I was going to nstall all 6 lights up on the roof but found that the Proline 6-light bar was too wide, so 4 would have to do. I really wanted to use the final 2 lights, so I found a unique way to mount them. The plow used through-bolts that held the plow dampers in place. Removing the short upper screws and replacing with longer ones allowed me to attach the ampers as well as the spare pair of lights. Problem solved. The LED controller was a bit large to fit in the receiver box so I wrapped it in a pretty green balloon and mounted it to the side. Not optimal, but it will do.

BODY, WHEELS AND TIRES
The stock Dodge Ram Power Wagon body was retained with just a few modifications. I had to make a few cuts to it for clearance the front valance to clear the plow and the wheel wells to clear the now-larger wheel/ tire combo. Pro-Line’s Interco TSL G8 Rock Terrain tires were wrapped around a set of the Faultline 1.9-inch beadlock wheels. The
combo looks awesome and had great traction until the tires started getting frosty from the snow. The memory foam seemed to hold in the cold and made the tires rock hard, resulting in a lot of wheelspin on even the lightest snow-covered areas. So what’s the cold-weather fix? Before you mount the Interco’s to any wheels, remove the massive
memory foam and cut it down a bit. I chopped off a good diagonal chunk from each side as well as a tiny bit of height. Worked like a charm. 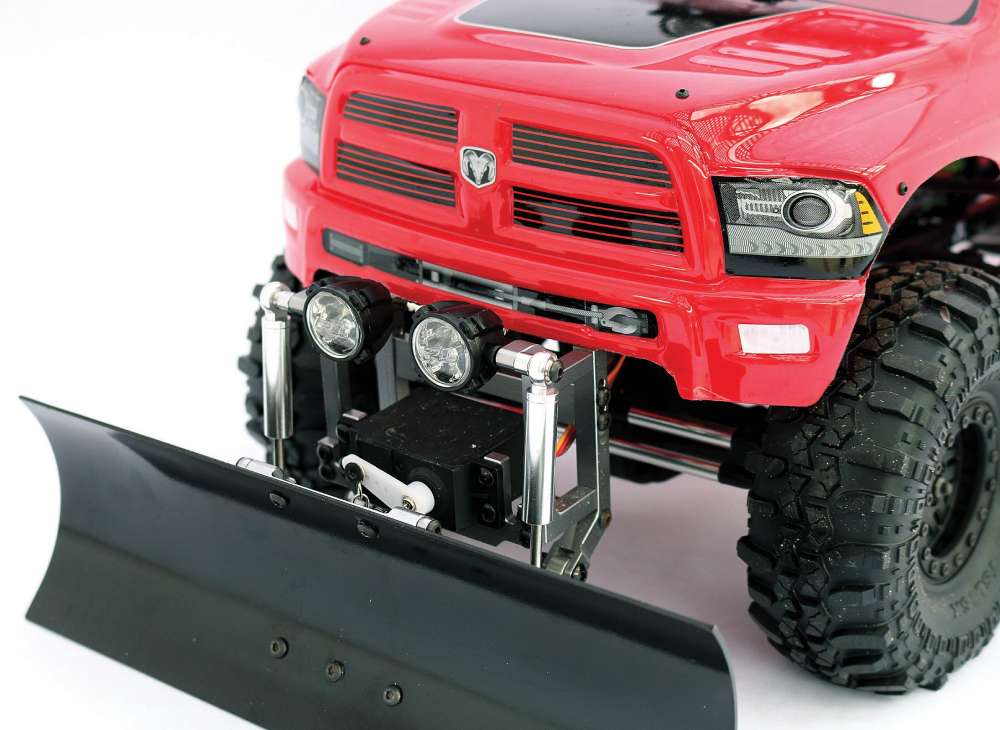 While I was really excited to give this Ram a go in the powdery stuff, the biggest hurdle was the fact that, well, I’m in California. It rarely rains here let alone there being any snow in the mountains this early! The wife and I loaded up the car and started our two-hour trek to the mountain’s summit, hoping we’d find enough snow to at least get a little play time and one or two good shots. We made it up to the top of the mountain and, as you’d expect at this time of the year, there was very little snow. What little snow there was had actually turned to ice this snow plow project was about to become a mud-plow project. As I said before, funny things happen in life sometimes and, as we were about to admit defeat, my wife’s friend Shirley called and happened to mention they were at their cabin in Green Valley Lake literally about 10 miles from where we were at. She said they were on the backside of the mountain and there was fluffy snow on the ground!

After a short 15 minute drive we arrived at their cabin and, sure enough, there was plenty of snow on the ground for the Plower Wagon. I installed the battery, flipped on the radio and truck and set it down. Blip I pressed the upper multi-function button the plow went up. Blip I pressed the lower multi-function button and the plow went down. It was time to carve some snow.

The SCX10 did a great job of pushing the snow around. Power was perfect, the truck looked super scale and the plow actually displaced quite a bit of snow. I really only experienced two issues  first, even though the plow comes pre assembled, it’s a good idea to remove the screws one by one and add some blue threadlocker. Most of the screws seemed to loosen up, creating a very wobbly plow. The second issue was the tire inserts hardening up, but I already addressed that earlier in this article. 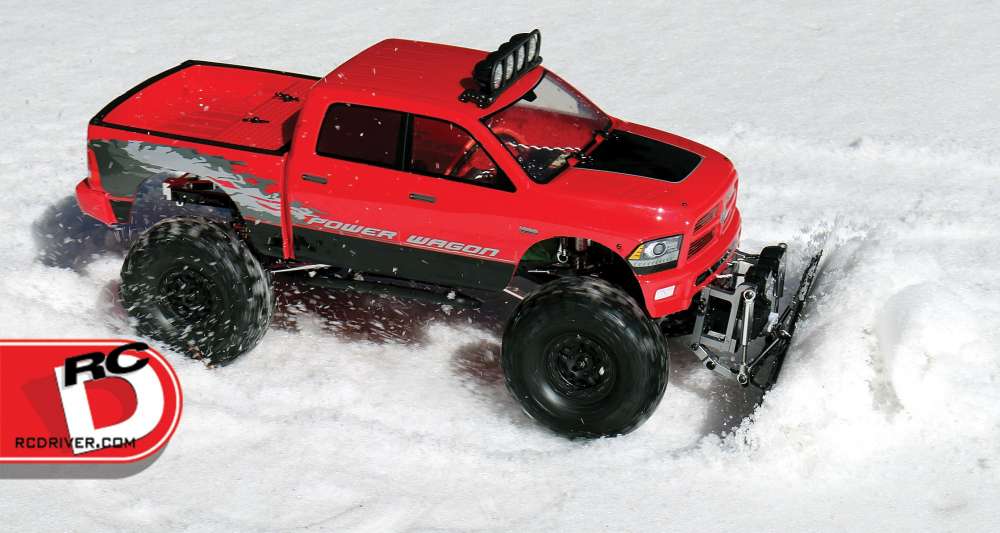 FINAL THOUGHTS
This was definitely a fun project but I’m a little bummed to see it go. I feel it was a lowkey, solid build that I probably would have used quite a bit during the Connecticut winters, but seeing as I’m back in Cali, I just won’t have that opportunity. I am, however, excited to see how Robin and Chris make use of it. I’m sure he’ll want more power, more lights, more something that’s just the way us guys are, right?