Power Up And Tear It Up! – New GensAce LiPo Car & Truck Packs

So, batteries are batteries, right? I mean, everyone says they all come from the same factory in China, but just have different labels, right? So we should all just save money and get the same results buying the import packs that are super cheap, right? No, No and No … in that order. Yes, many cells from many a great different manufacturers do come from a few of the same locations in Shenzhen, but there are distinct differences. Let me explain …

One of the most important factors in building a good battery is selecting cells that are closely matched. Second to that, the internal wiring for said cells needs to be top notch with quality components and decent solder joints (no point in running a 100C pack if the internal resistance is through the roof on that pack). I look at it this way: In the RC car world these days, there are three types of batteries (in the USA anyway). First are the supercharged, high dollar packs from race companies like Reedy and Orion. These packs will surely give you podium worthy speed and power, but at a cost. Second are the “first LiPo” and “race pack on a budget” type batteries from companies like Duratrax and Venom. These cells are perfect for first timers to LiPo technology as well as club racers and bashers alike. Venom, especially, produces one of the widest ranges of LiPo RC car packs, there’s sure to be something you could use. These batteries are cheaper than the aforementioned race packs, but are definitely great cells with great support. Third are the pure import packs from sites such as HobbyKing and RCmart. These LiPo’s boast big numbers at small price points. Most folks buying these don’t care about the C-rating, they just see the dollar amount and trip over their own tongue scrambling for their wallet. It’s great if you need a bunch of packs on a budget, but there is very little after sale support from such vendors.

However, there is now a fourth option for your RC car and truck power needs that falls right smack in the upper end of the performance arena (with the Race packs and such), but tallies out at a rock bottom import price … and they have US based customer support and warehouses! GensAce (Known as

Tattu on the air side) has been around for a while and having been involved in regional and national level events in years past, I can assure each person reading this that they were potent cells back in the day, but with limited support stateside. That’s all changed now as GensAce has setup shop in Dublin, California and they have revamped their entire lineup of packs. There is an assortment of ROAR approved race packs, from shorties to saddles and everything in between, but some of the hottest cells coming out of the far east via Dublin are the basher packs.

If you’ve got an Arrma or other basher truck that you love to abuse on a daily basis on 6S power, but are concerned about damaging softcase batteries in the vehicle, GensAce has got you covered. They serve up 3S packs in 5000mAh 25C, 5300mAh 50C and 7000mAh 60C … all with hardcase and balance lead retainer. Speaking of

which, ever toast a battery because those tiny little balance leads came out of the plug? Worry no more as one of the coolest inclusions with each of these packs is a nifty little plastic retainer that encases the leads and plug, keeping them nice and safe. If your into long runtimes at extreme speed in your 2wd machine, opt for the softcase 8400mAh 3S pack. You could be doing 60 mph for 45 minutes straight!!

-US based shipping and support

-90 day warranty on all LiPo packs

-No factory options for XT90 plugs on the packs … yet

GensAce hooked me up with a bunch of cells for a wide variety of vehicles, but I had my eyes set of the hardcase 3S packs for my Arrma Outcast. I beat the bejesus out of that truck and am always worried about puncturing one of my Onyx 5000mAh packs while running two of them for 6S power, but not any more. With two hardcase packs in there, I was able to cut loose and worry about nothing else other than having a ball with my stunt truck. I did have to swap the factory supplied Deans connectors on the packs for some XT90’s and use a bit of muscle to get both packs stuffed under the telescoping battery cover. A pleasant added benefit was that the GensAce packs also seemed to have a bit more punch than the Onyx packs, even though both are rated at 25C. Sadly, the 5300mAh 50C hardcase 3S packs from GensAce are too tall to fit into the Outcast. They are only 1mm taller than the 5000’s, but I had to use a shoehorn to get the smaller packs into the beast. The 5300’s do, however, fit into the Nero battery bays with a bit of coercion (stay tuned for a separate write-up on that project). Another nice touch on the hardcase packs is that the wires can either be run out the end or up out the top, courtesy of a nice little channel cut into the top corner of each case.

For race duty, I received the new 2S 4200mAh shorty pack for my 2wd buggies, the class that started it all and is still all the rage. I slapped the pack into 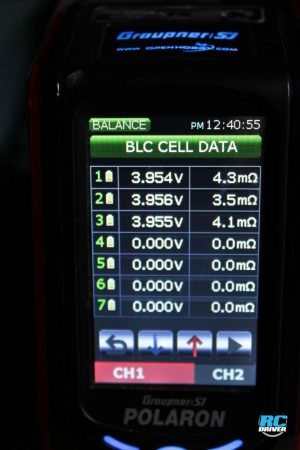 my AE B6D and took my turf monster out for a tear. With a stated 60C discharge rating, the GensAce shorty packed noticeably more punch than my tired old Trakpower 4400’s that were rated at 50C. With a 17.5 for “Spec” power, I was able to clear sections of jumps previously unattainable. After a good 6 minute run, my motor was only slightly warmer than usual (130 degrees) and I noticed absolutely no fade from the first minute to the last. No I finally had the power to “double dip” and run my spec buggy in both the Stock and Mod classes at the same event, given the smaller indoor venue. I always wait a while (as you should as well) before juicing the packs back up after running and I always balance charge using my Graupner Polaron EX dual chargers. I can honestly say that all of the new GensAce packs charge and balance with numbers equivalent to much pricier LiPo’s. Less Internal Resistance equals more power and longer life for my batteries … and that is certainly a good thing!

Once I was finished with my test and tune on the track rig, I had to take my son out for a romp with his buggy. I already had the extended battery post in the bay, so with a little elbow grease, I was able to stuff the 8400mAh 3S pack into place. In training mode; the buggy ran for 2 two freakin’ hours before the LVC kicked in!! Obviously motor temps are something to look out for when running such a large pack, but in training mode, I just sat back, cracked a cold one and watched the little dude burn some calories and rubber. With a retail price of just under 65 smackers, I can see GensAce selling a butt load of these packs to the bash crowd looking for uber long run times.

Yes, one can always argue that a battery is just a battery, no matter who you get it from. I’ll just smile and nod as my GensAce powered car blasts past your import powered ride. Seriously though; super cheap prices, awesome construction and attention to detail, stellar performance and an actual 10-digit phone number to call when/if you have any issues with your product. That’s one hell of a convincing list when you’re looking to purchase your next battery. If that isn’t enough, toss in the warranty and rewards points you can accrue from frequent purchases and you’ve got a hands down winner for the best bang for your buck in the industry … an industry where there are enough options to make your head spin. Ditch the Excedrin and dial up GensAce for some serious power.

WORDS AND PHOTOS BY: Matt Maziarz