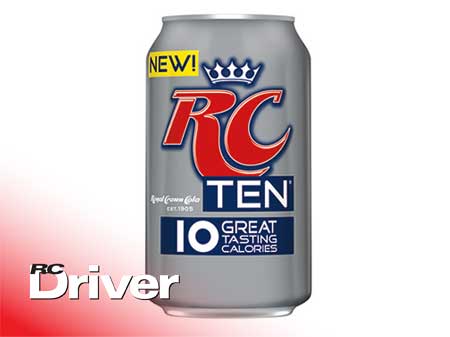 When you hear the words RC10 (or RC TEN), I’m sure the first thing that your brain spits out is an image of Team Associated’s legendary gold-anodized RC10 Buggy. Why? Simply because it’s an iconic representation of our hobby or sport and the reason most of us have high-tech RC equipment. That car started it all not only with it’s killer design but also the clever marketing that came along with it. And that was back in 1984!

Well, for a couple hundred thousand other people in the world, RC TEN just happens to be a relatively new drink from RC Cola International, a soda company that has been around a really really long time. I saw this and found it funny that the term RC TEN would be used by ANYONE outside the RC industry…maybe they’re glomming onto the wave that is sweeping the RC industry with the re-release of the RC10. Or, maybe it just means their Royal Crown (THEIR meaning for the RC abbreviation) drink has only TEN calories.

Whatever. I know they have nothing to do with each other, I just thought it was funny. And cool. And I thought I’d blog about it. That’s just what I do.